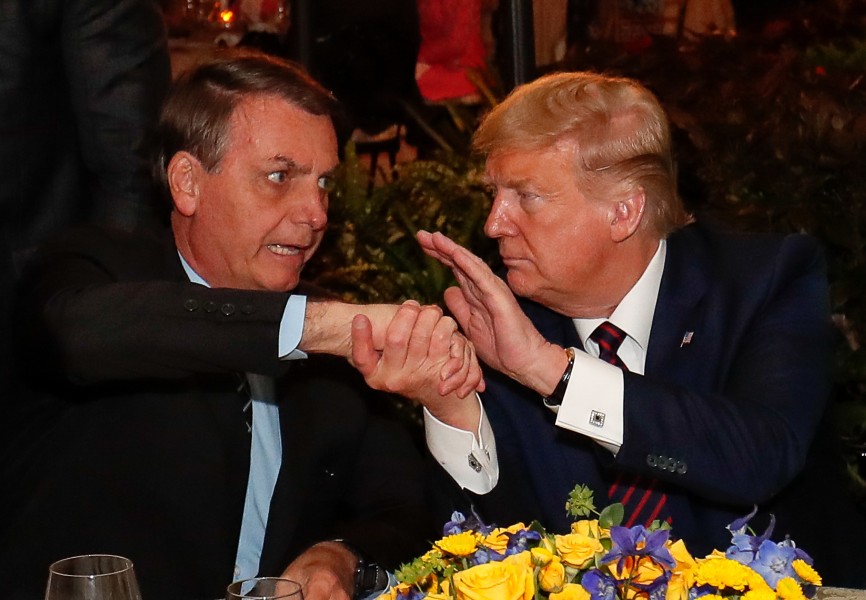 Brazilian President Jair Bolsonaro and US President Donald Trump. REUTERS.
The scars of an extraordinarily divisive election in the US and of one of the world's worst ever pandemics will have lasting consequences for the politics of both North and South America. Eurasia Group experts Jeffrey Wright, Ana Abad, Daniel Kerner, and Silvio Cascione analyze the fallout from a tumultuous 2020.

What will be the impact of this year's bitter election on US politics in 2021?

For many Republicans, the 2020 election is not over. Nearly 40% said in a recent survey they either believe Donald Trump won or they're not sure who did, and 64% say they lack confidence in the fairness of the election. That lingering distrust has been fed by Republican officials, led by Trump himself, who continue to insist that he won and make allegations of widespread fraud that have been rejected by every court that has considered them. That distrust will likely be the chief legacy of the election, meaning Republicans with ambitions for higher office will continue to parrot them to stay in the good graces of the most important GOP grassroots fundraising and voter outreach efforts. Consequently, bipartisan compromise next year will be more difficult, and Trump will maintain his influence with Republican voters. Meanwhile, the election has also divided the Democratic coalition, which soon will not have a shared antipathy for Trump to paper over its differences. After disappointing results in the House and Senate, centrist and progressive Democrats have blamed one another for their losses, sharpening intra-party divisions that have also played out in President-elect Joe Biden's cabinet selection process. Those divisions could make legislating next year more difficult, given Democrats' thin margins in the House.

How has the pandemic affected political stability in Latin America in 2020?

The region has been hard hit, both in health and economic terms, and the crisis is far from over. Though cases and deaths have stabilized somewhat, they remain high, and there is little political room to implement and enforce new lockdowns, should countries face a second wave. As a result, most governments are counting on vaccines becoming available in coming months. Many of the largest countries have arrangements to gain access to vaccines, but their rollout will take time and risks remain high. At the beginning of the pandemic, several governments launched ambitious fiscal and monetary stimulus packages to mitigate its economic impact but now have limited resources to maintain this approach. A favorable global environment could help boost growth, but governments are under increasing pressure to take actions to reduce fiscal vulnerabilities. Moreover, countries will emerge from the pandemic with higher levels of poverty and inequality, which will exacerbate the already high levels of social discontent most governments were facing before the health crisis. That will make for a challenging year for Latin American governments. The region will begin a heavy electoral cycle with general elections in Ecuador, Peru, and Chile and midterm elections in Argentina and Mexico. While an expected economic recovery will be welcomed, elections will be marked by high levels of voter anger, which could boost the competitiveness of outsider populist candidates. In this context, governments will struggle to make needed reforms and economic adjustments, while high levels of investor uncertainty, coupled with a long pandemic, could limit the economic recovery.

For Brazil's Bolsonaro (known as “the Trump of the tropics”), what will be the legacy of 2020?

This was a tumultuous year for Bolsonaro, but he has emerged in a relatively strong position. Brazil's strong fiscal response to the Covid-19 crisis put the economy back on track very quickly, with a generous monthly stipend going into voters' pockets. The president's approval ratings are higher than they were before the pandemic, dashing the hopes of those who thought Trump's election defeat in the US might signal waning support for right-wing populists around the world. Still, 2021 will not be easy for Bolsonaro. Vaccination campaigns will start soon but will take months to provide sufficient protection against another strong wave of Covid-19. Meanwhile, the massive fiscal stimulus will not be extended into 2021, because of high public debt, so the economy may start to lose some steam. Bolsonaro's fate will depend on two things: how quickly and efficiently vaccination minimizes Covid-19 risks and how much the economy suffers without fiscal stimulus. The president's popularity will probably drop a bit in 2021, but this could be just a temporary blip if the economy holds up reasonably well. If that is the case, Bolsonaro will be a strong candidate for reelection in 2022. But if the economy takes a more serious hit, and the pandemic lingers for longer, politics will be more volatile in Brazil and the 2022 vote will become more competitive and uncertain.