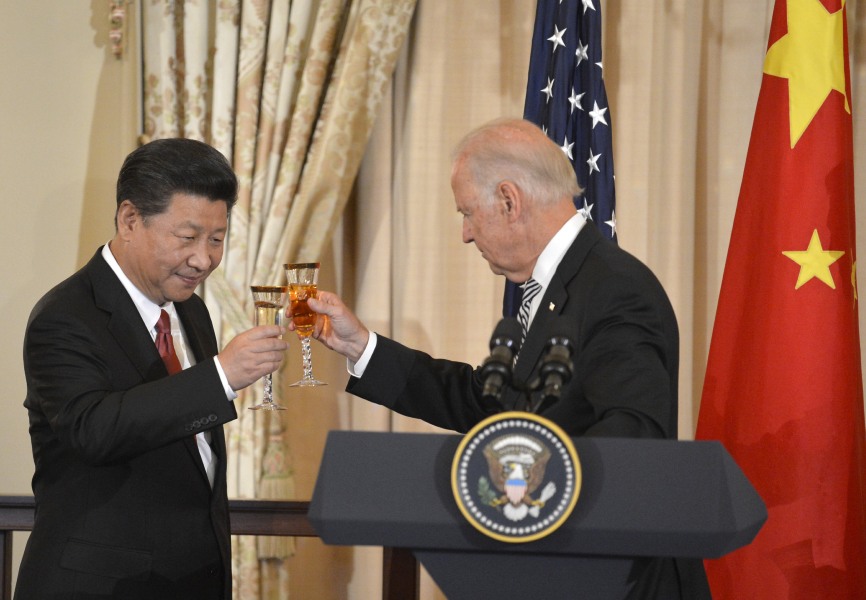 Former US Vice President Joe Biden and Chinese President Xi Jinping at a 2015 US State Department luncheon. REUTERS.
A potential victory in the upcoming US presidential election by Democratic candidate Joe Biden would not usher in a new round of global trade liberalization. Though most economists continue to tout the broad benefits of the free movement of goods and services, the political realities of trade in the US have changed fundamentally, even if President Donald Trump loses his reelection bid. Still, there is much a President Biden could do to smooth some of the disruptions to global commerce caused by Trump's America First agenda.

Relations with China would undergo a partial reset under Biden, and further escalation of the trade war between the world's two largest economies would be unlikely in the first year of a Biden administration. Still, reductions in US tariffs on Chinese goods would remain gradual—and potentially elusive—given likely US demands for concessions from Beijing on market access, intellectual property reform, and state subsidies for private industry that Chinese leaders are unlikely to agree to.

More importantly, a Biden administration would champion a more collaborative and less disruptive approach to China based on creating with US allies a stronger front against China. Countries in Europe and Asia have long shared the US's concerns about Beijing's ability to use loopholes in global trade rules to advance its model of state capitalism. The first step would be to reestablish the WTO's relevance as a global trade watchdog by electing its next chief and revamping the organization after removing a blockade on the organization's appellate body. A new director general could be confirmed days after the 3 November election in the US, unless the Trump administration blocks a consensus. The WTO's new leader will be expected to resolve the gridlock over its appellate body, push members to finalize long-running talks, and enact a reform agenda to make the body relevant in the fast-evolving, largely digital, and more integrated 21st century economy.

The focus of the overhaul would be tackling the distortions of Chinese economic and trade policies. Even during the Trump administration, the US, the EU, and Japan made headway on an update to rules on subsidies and state-owned-enterprises. They also advanced a framework to prevent forced technology transfers. Biden would likely fold these initiatives into a broader campaign against China that aims to counter the perception that Beijing has been able to cheat the rules-based multilateral system in spirit if not the letter. That campaign would include efforts to bring more scrutiny to China's use of its policy banks and to boost the capability of the US Ex-Im Bank and Development Finance Corporation as counterweights.

EU-US trade relations stand to get an immediate political boost under Biden, even if some longstanding irritants—such as the aircraft subsidies battle at the WTO—would remain. A quick and easy step for Biden would be to unequivocally remove the threat of auto tariffs and end Trump's steel and aluminum tariffs, to which the EU would respond by lifting countermeasures and withdrawing a WTO complaint.

Biden is likely to continue to use Section 301 probes in instances where US companies are being unfairly targeted, but a complaint to a functioning WTO is just as likely. Biden's senior foreign policy adviser Antony Blinken has pledged to end the “artificial trade war” with the EU, and more broadly Biden would diverge from the Trump practice of using Section 232 and 301 authority to justify tariffs in an effort to build negotiating leverage, or as a punishment of first resort against unfavorable policies or developments.

But ending the trade war doesn't mean reviving the Transatlantic Trade and Investment Partnership (TTIP) launched under Barack Obama—for which there's also no appetite in either the US or the EU. Though small trade deals are possible, Washington and Brussels would probably focus their efforts at collaboration on other areas, including cybersecurity and climate change. The US is likely to engage early on with the EU's plan for border carbon adjustment tax, which is expected to be made public in greater detail by mid-2021.

Challenges for other trade deals

The US would continue its engagement with the UK for a free trade agreement. Washington would chart the course of discussions, and the UK would want to build on negotiations during the Trump administration with sweeteners on climate, the environment, and labor issues.

But given that the executive branch's Trade Promotion Authority (TPA) is unlikely to be renewed when it expires in mid-2021, the deal with the UK, as well as others in the process of being negotiated with Brazil and Kenya, will face a much steeper uphill battle to win approval in Congress unless negotiations are completed by the end of June. TPA allows for fast-track approval by protecting legislation from amendments and the Senate filibuster. Negotiations with Brazil would face the additional challenge of an increased sensitivity of a Biden presidency to environmental issues. The administration of Brazilian President Jair Bolsonaro has come under harsh international criticism for its failure to curb deforestation in the Amazon rain forest.