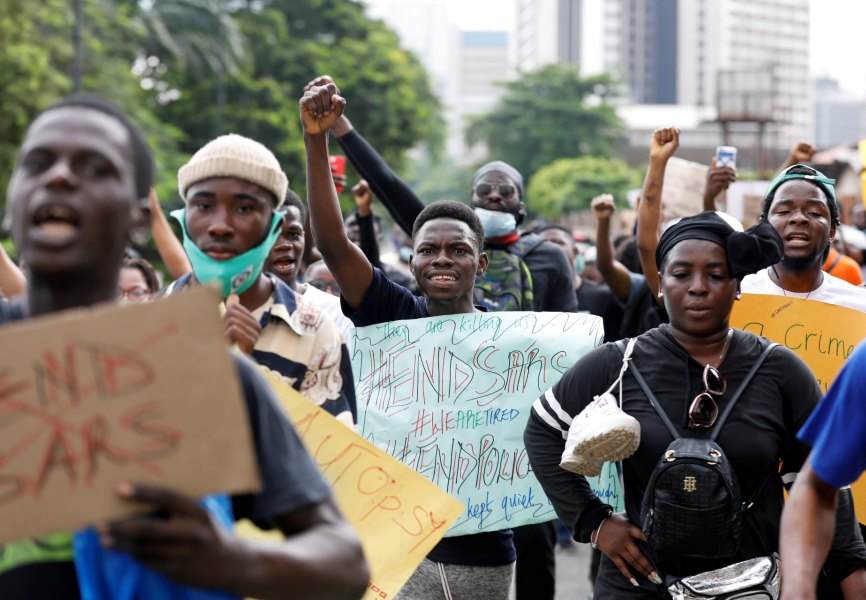 Nigerians protest against the Special Anti-Robbery Squad in Lagos. REUTERS.
The political awakening of Nigeria's younger generations in 2020 will have a lasting impact on the country's landscape, while Mozambique's struggle to contend with a growing Islamist insurgency will continue. All this will occur amidst sub-Saharan Africa's efforts to rebound from Covid-19, with some countries facing more challenging growth outlooks than others.

What was the biggest/most significant story in Africa in 2020?

Youth-led demonstrations against police brutality which broke out across Nigeria in October could be a defining moment for the political consciousness of young Nigerians. The protests, incited by the conduct of the Special Anti-Robbery Squad—a police unit implicated in several extrajudicial killings—were the country's largest in a generation and drew out tens of thousands of people in Lagos, its largest city,. The demonstrations ended abruptly after an outbreak of violence prompted a heavy-handed crackdown by security forces, but they will likely have a lasting impact on the political landscape, starting with the 2023 elections. The protests could drive greater political engagement among the youth (under-35s), who make up around 75% of the population and 51% of registered voters but have tended to not vote in large numbers in previous elections. And an increasingly urban population promises to bring into focus structural issues like police reform, which in the past has taken a backseat to issues important to rural voters like the provision of basic needs.

What was Africa's most overlooked story in 2020?

Mozambique's Islamist insurgency intensified this year, displacing hundreds of thousands of people and bringing the death toll since the start of the insurgency in 2017 to more than 2,000. The insurgency is happening on the border with Tanzania in the northernmost corner of the country—Cabo Delgado province—more than 2,700 km away from the capital Maputo. Though the insurgents are affiliated with the Islamic State's Central Africa Province, the conflict has barely made international headlines. Reports in November of the beheading of 50 villagers by insurgents prompted French President Emmanuel Macron to call for a global response to end the insurgency, but no international or regional power has yet pledged support beyond training and information sharing.

Since the start of the insurgency, Mozambique's government resisted overtures by foreign governments for support and instead relied on private military contractors. It has had a change of heart over the course of this year, as it became increasingly clear that the insurgents are growing in number and—most importantly—encroaching on the site of the country's nascent LNG sector that has attracted more than $60 billion of investment from international energy companies.

What is the most important trend/story to watch for in Africa going into 2021?

As sub-Saharan African economies look to rebound following the Covid-19 pandemic, some countries in the region may encounter fiscal headwinds that could pose challenges to their growth outlooks. South Africa and Angola, southern Africa's major economies, are particularly vulnerable to debt crises. Southern Africa has grown slower than the rest of the continent since the global financial crisis, as both Angola and South Africa have racked up commercial debt to maintain extensive patronage networks linked to entrenched political elites. The lack of visionary political leadership will inhibit both countries from reaching the levels of economic growth required to rein in debt. Zambia, which defaulted on its Eurobond payments in November, must determine how to engineer an economic rebound while navigating election year politics and trying to engage positively with existing and prospective creditors that do not trust it.

Fiscal challenges in Ghana, particularly from mounting energy sector debt, will also pose a challenge to President Nana Akufo-Addo, who won reelection earlier this month. Another engagement with the IMF will be a last resort; instead, the government will look to issue new debt and to receive grants and debt relief from global financial institutions to mitigate fiscal pressures next year.

For Ethiopia, the war in Tigray (in tandem with existing and emerging unrest) and upcoming elections will complicate efforts to maintain budget discipline and political momentum for the government's economic reforms. Kenya, meanwhile, will have to balance economics and politics in its attempts to secure an IMF program and remould its debt profile to account for the economic toll of the pandemic.