Where the US and Mexico go under Biden and Lopez Obrador 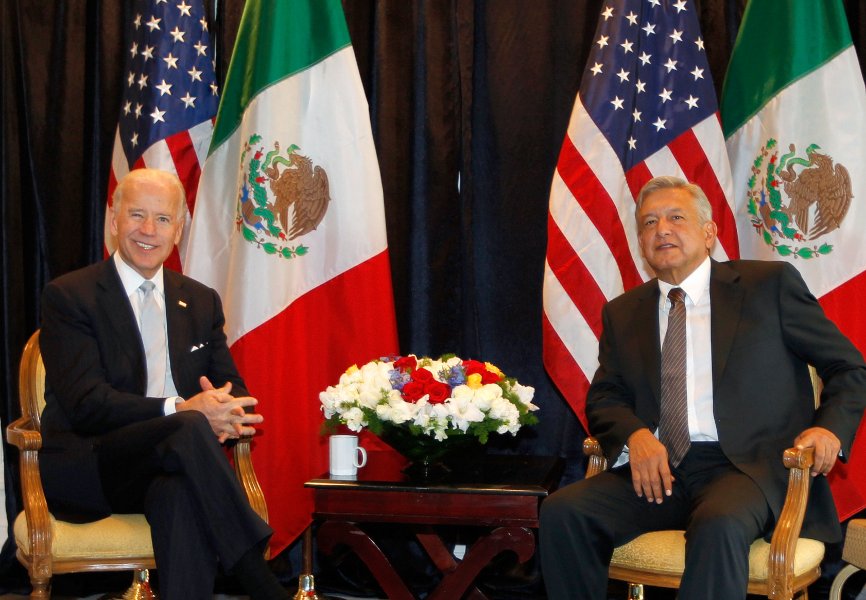 US President-elect Joe Biden and Mexican President Andres Manuel Lopez Obrador in 2012, when Biden was vice president and Lopez Obrador was a presidential candidate. REUTERS.
Many world leaders have congratulated Joe Biden on winning the 2020 US presidential election, despite President Donald Trump's continued refusal to concede the race. There have been notable exceptions, including Russian President Vladimir Putin and Brazilian President Jair Bolsonaro.

More surprising has been Mexican President Andres Manuel Lopez Obrador's silence. Tensions between the US and Mexico over trade and immigration over the past four years as well as vast ideological differences between Lopez Obrador and Trump led some to assume Mexico's president would welcome a change in American leadership. But Eurasia Group experts Daniel Kerner, Carlos Petersen, Ana Abad, and Jeffrey Wright explain why Lopez Obrador doesn't fit neatly into pro-Trump or pro-Biden categories and how the US-Mexico relationship might shift going forward.

Lopez Obrador's reluctance to recognize Biden's election victory stems from a desire to avoid angering Trump and to reduce the risk of any disruptive moves against Mexico before Biden takes office. The Mexican president is primarily focused on domestic matters; his interest in foreign policy has mostly involved efforts to limit outside interference in internal policy decisions. Since taking power in December 2018, Lopez Obrador has sought to quickly and as closely as possible meet Trump's demands—from signing off on the United States-Mexico-Canada Agreement (USMCA) to bolstering security measures that stemmed Central American immigration flows to the United States and helped avoid Trump's tariffs. Lopez Obrador's approach is to reduce tensions with the US that could not only hurt Mexico's economy but also distract attention away from his domestic priorities.

The leader's distaste for external intervention in Mexico's affairs translates to a strong disinclination toward interfering in other countries' business. As a result, he has said he would wait for the US election to be certified before congratulating Biden.

Finally, Lopez Obrador's own electoral history—he never recognized his defeats in 2006 and 2012 and still believes the former election was stolen from him—might also explain his unwillingness to acknowledge Biden and contradict Trump's claims of a rigged election.

Trump viewed the US-Mexico relationship through the lens of immigration and trade. How will Biden address these issues?

The two countries' trade relationship is likely to remain on a solid path under Biden and Lopez Obrador, with no real risk that either leader will revisit USMCA. Implementation of USMCA labor standards, however, could be an issue. Mexico's 2019 labor reform was key to ensuring Democratic support for ratifying the agreement, and the US will want to see material results from that reform. If the US sees progress as lacking, it could resort to dispute resolution mechanisms and inspections, which have been controversial in Mexico.

USMCA is also supposed to ensure the US, Mexico, and Canada remain part of international environmental agreements. Biden's campaign strongly emphasized environmental issues, and as president, he might look for space to secure Mexico's compliance with these agreements and push for more investment in renewable energy. On immigration and security, Biden will adopt a far less confrontational approach than Trump.

What does Mexico stand to gain and lose under Biden?

Biden's promise to revive the automotive industry to better compete with China in electric vehicles could be a win for Mexico. Lopez Obrador's administration is also well-positioned to attract investment from firms looking to avoid supply chain disruptions caused by US-China tensions.

Though Lopez Obrador will generally continue trying to appease the US so he can focus on his domestic goals, he has been less compliant when it comes to energy, given its centrality to his agenda.

US lawmakers recently wrote a letter to Trump accusing Lopez Obrador of providing preferential treatment to Mexican state-owned petroleum company Pemex and state-owned utility Federal Electricity Commission (CFE) in violation of USMCA. Lopez Obrador defended his right to favor state-owned firms over private interests, but if the dispute gains steam under Biden, the US might threaten to bring cases to international arbitration courts.

Broadly speaking, threats to the stability of the US-Mexico relationship will decline once Biden takes office.