Eurasia Group | Politics in Pictures: a visual guide to our Top Risks for 2020

Politics in Pictures: a visual guide to our Top Risks for 2020

A broken impeachment mechanism, potential questions of the legitimacy of the electoral process, and the prospect of court challenges will make this the most volatile year of politics the US has experienced in generations. We've never listed US domestic politics as the top risk, mainly because US institutions are among the world's strongest and most resilient, but those institutions will be tested in unprecedented ways in 2020. 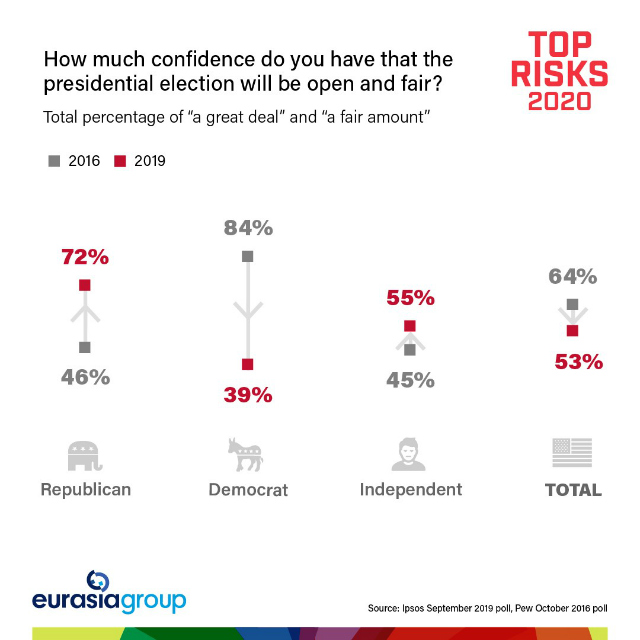 The decision by China and the United States to decouple in the technology sphere is the single most impactful geopolitical development for globalization since the collapse of the Soviet Union. After a series of escalatory US policy moves in 2019, Beijing has concluded that decoupling is inevitable; President Xi Jinping has called for a new “Long March” to break China's technological dependence on the US. 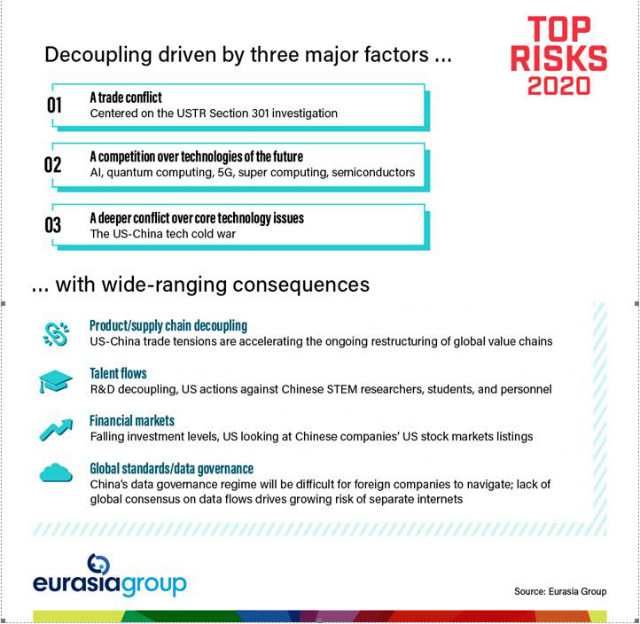 As this decoupling occurs, US-China tensions will lead to a more explicit clash over national security, influence, and values. The two sides will continue to use economic tools in this struggle—sanctions, export controls, and boycotts—and the US will be perceived by China as targeting its core interests. Companies and other governments will find it harder to avoid being caught in the crossfire. 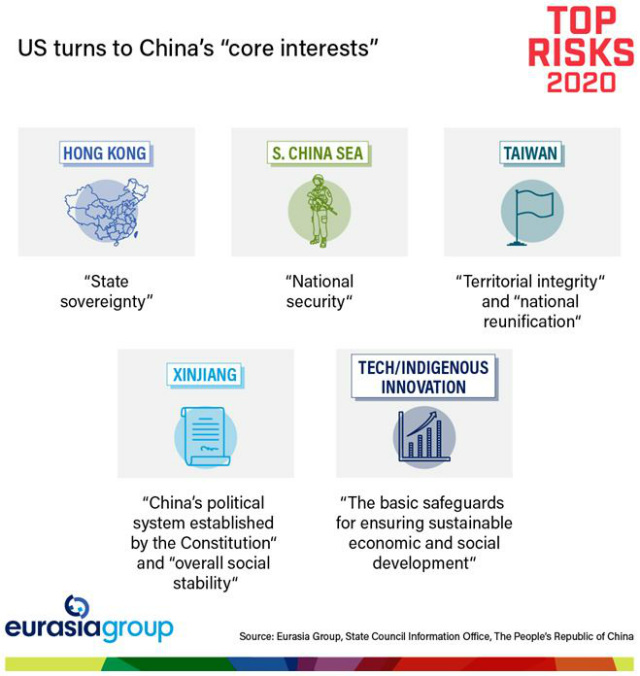 The erosion of global governance in recent years has surfaced hopes that multinational companies would fill the gaps in global governance around issues like climate, poverty, health, and trade. But instead, MNCs are likely to face a tougher and more fragmented regulatory environment from states, increasing complexity, raising costs, and threatening profitability. Data privacy policies in Europe, a digital tax push in the OECD, and an “unreliable entities” list in China are just the beginning of the list of challenges. 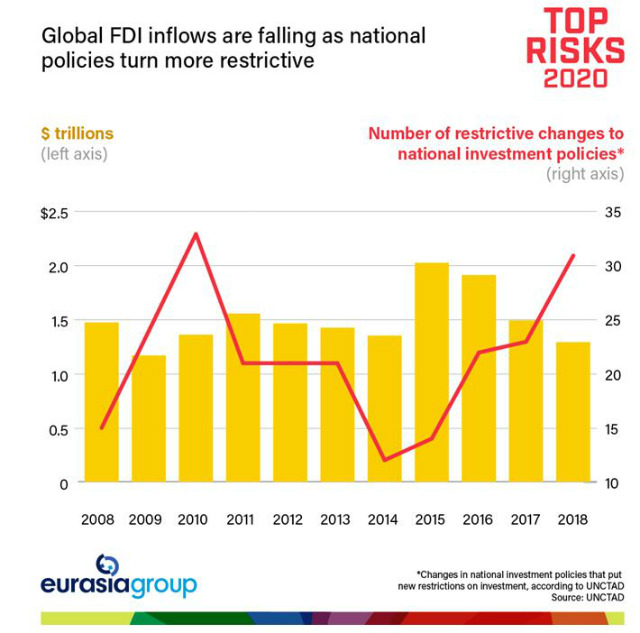 Prime Minister Narendra Modi has spent much of his second term promoting controversial social policies, taking away focus from economic reform. The impact will be felt in 2020, amid slowing growth, intensified communal and sectarian instability, and heightened foreign policy challenges.

A more geopolitically assertive Europe will create a backlash both in Washington, DC and in Beijing. The EU's use of its regulatory powers over the Single Market to push its agenda on issues like climate change, data privacy, and the taxation of technology firms will raise the risks of retaliatory tariffs. Meanwhile, efforts to create a more uniform EU stance on issues such as BRI financed projects, anti-dumping legislation, and on human rights issues will increase frictions with China. 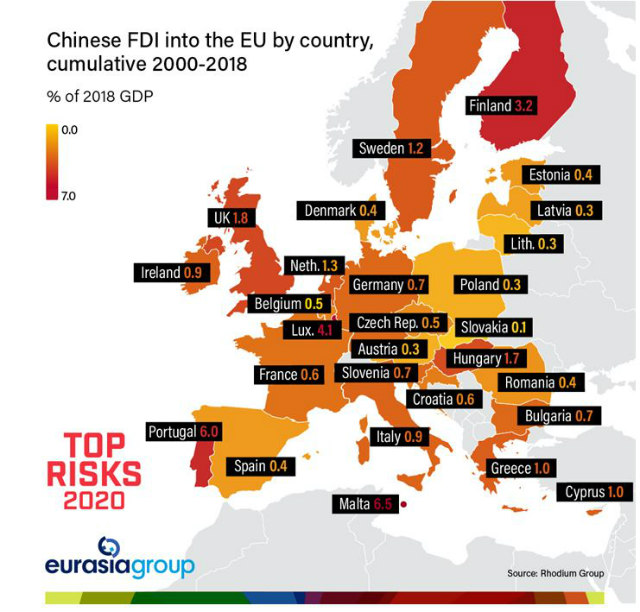 The politics of climate change aren't working. Dozens of countries signed on to the Paris Agreement five years ago to limit warming to 2 degrees Celsius by the end of the century. But nation-states have to date failed to implement policies that might even come close to achieving that goal. This year that failure will lead to suboptimal corporate decision-making, operational business disruptions, and political instability. 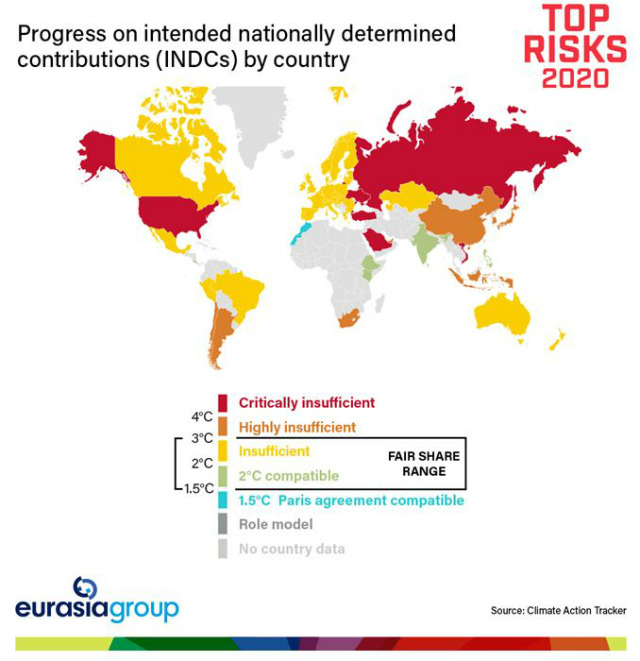 US policy toward the major Shia-led nations in the Middle East is failing. That creates significant risks for regional stability, including a lethal conflict with Iran; upward pressure on oil prices; an Iraqi state that is either in Iran's orbit or failing; and a rogue Syria fused to Moscow and Tehran. 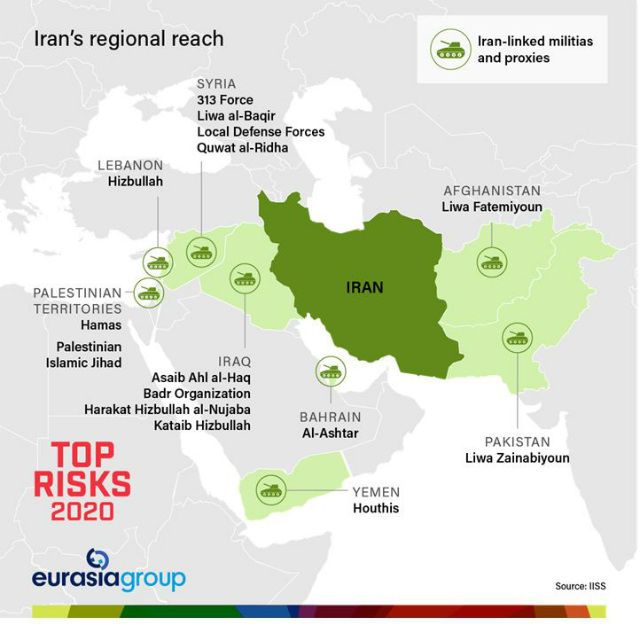 Public anger will keep the risk of political instability high across the region. Voter complaints include sluggish growth, corruption, and low-quality public services. New and vulnerable middle classes want more spending on social services even as Latin American economies have slowed sharply with little hope (outside Brazil) of economic reforms that might rekindle growth. 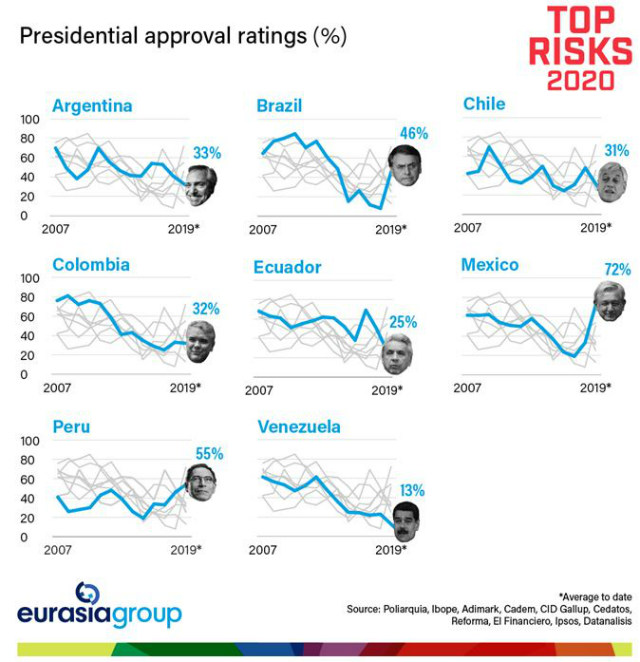 President Recep Tayyip Erdogan has entered a period of steep political decline. Erdogan has a long history of provocative behavior in response to threats, sparking confrontation with both foreign and domestic critics. This year, his weakness will lead him to lash out. The response will further damage Turkey's already ailing economy. 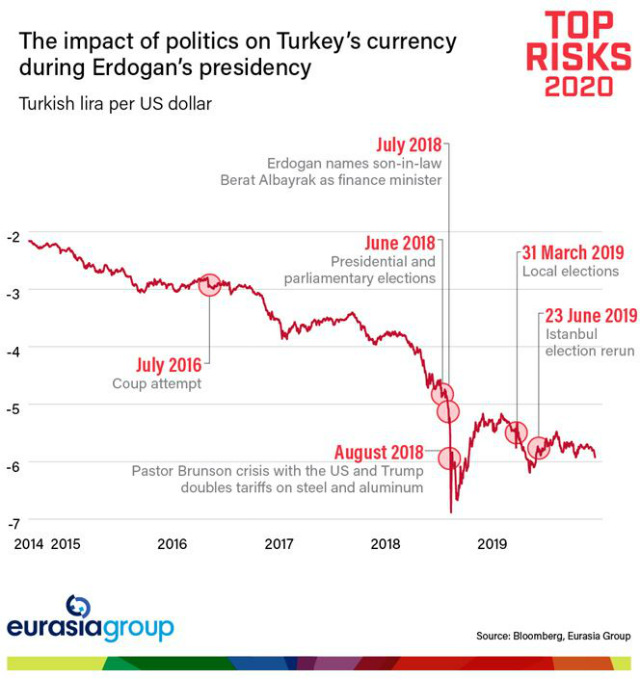 To learn more, read our Top Risks for 2020 report.