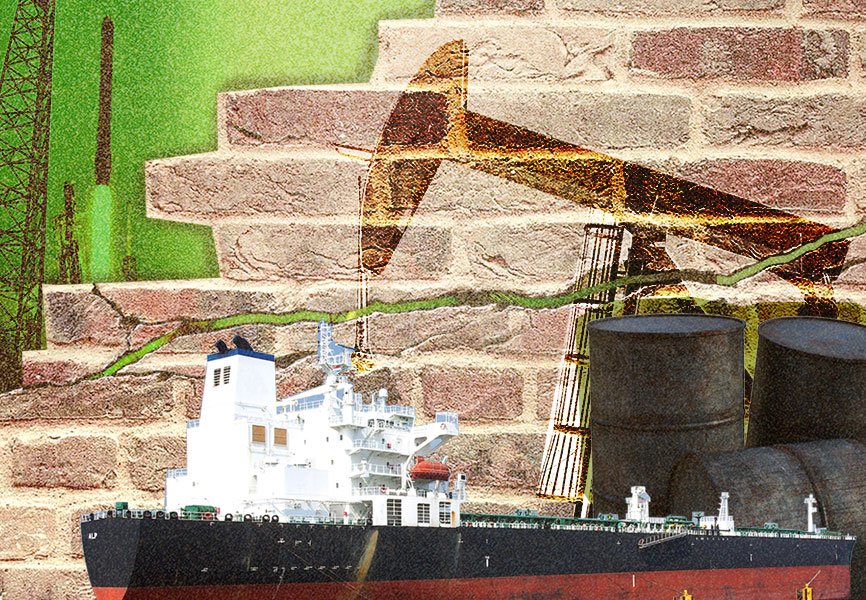 In January, risk #8 detailed how the failure of US policy toward Iran, Iraq, and Syria—the major Shia-led nations in the Middle East—would create significant risks for regional stability. These included a lethal conflict with Iran; upward pressure on oil prices; an Iraq caught between Iran's orbit and state failure; and a rogue Syria fused to Russia and Iran. Neither Trump nor Iran's leaders want all-out war, we argued, but deadly skirmishes inside Iraq between US and Iranian forces are probable. The likelihood would increase that the Iraqi government would expel US troops this year, and popular resistance from some Iraqis against Iran's influence there would strain the Iraqi state—OPEC's second-largest oil producer. Feckless US policy in Syria would also drive regional risk in 2020.

The coronavirus outbreak will weaken Iran, Iraq, and Syria. That will lessen the threat of US military conflict with Iran but amplify the effects of failed US policy on the latter two nations and the region. Iran is struggling to confront one of the world's largest outbreaks of coronavirus. Tehran wasn't looking for war with the US before the coronavirus and certainly does not want one now. But it will continue making trouble in the region and wage a public relations battle against Washington's refusal to meaningfully ease sanctions in the face of a humanitarian crisis. As we wrote in January, ill-conceived US policy has been a cause of instability across the region. Iraq is now even more at risk of state failure—with a collapse in oil prices and without a government—and could be pushed over the cliff by an outbreak there. That would be a boon for a resurgent Islamic State and potentially force the US to abandon ship. Syrian reconstruction will also suffer, both if there's an outbreak of the coronavirus and because regional capital will become more constrained as a result of sharply lower oil prices. 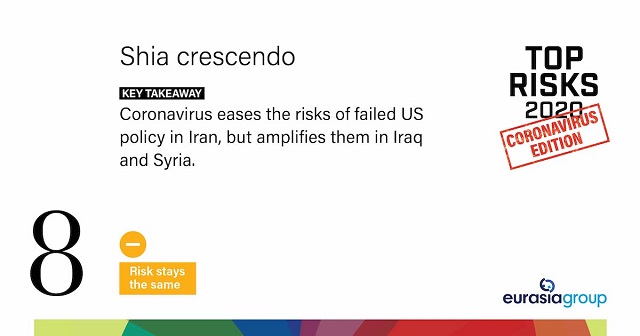 US POLICY TOWARD THE MAJOR SHIA-LED NATIONS IN THE MIDDLE EAST IS FAILING. That creates significant risks for regional stability, including a lethal conflict with Iran; upward pressure on oil prices; an Iraqi state that is either in Iran's orbit or failing; and a rogue Syria fused to Moscow and Tehran.

The 2 January killing of Qods force chief Qassem Suleimani, ordered by Trump, escalated already significant US-Iran tensions. This is a #8 risk, not higher, because of strong structural pressures against a major war (see red herring #1). Iran is a committed adversary of the United States but also has a clear understanding of US military power … as well as (now) a better sense of Trump's red lines and deterrence capacity. Iran further has a history of backing down in the face of an overwhelming military threat. For his part, Trump still seeks to avoid large-scale military entanglements on his watch, especially as the election campaign gears up. 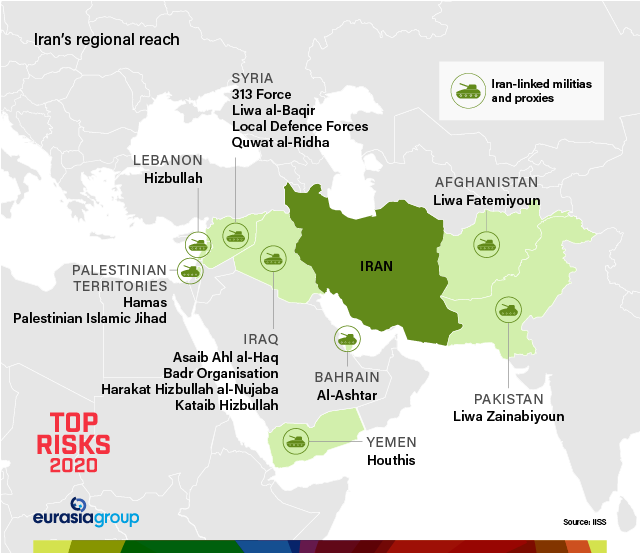 But the US-Iran relationship will be deadly and geopolitically destabilizing. Lethal skirmishes in Iraq between US and Iranian forces are likely. Iran will continue to disrupt tanker traffic in the Gulf. Tehran also has a penchant for hitting adversaries in unpredictable, asymmetric ways, including through its robust offensive cyber capabilities and proxy network across the region with the capacity to target the citizens and assets of the United States and its allies. A more dangerous if still limited US-Iran regional conflict is less likely but possible. Iran tensions will put a minimum of a $5–$10 premium into the oil price this year and increase volatility.

US policy toward the major Shia-led nations in the Middle East is failing.
In Iraq, the United States is on its way to persona non grata status, which will leave more running room for an already influential Tehran. US bombings and the Suleimani killing have alienated much of the Shia Iraqi political class. The chance is rising that the government will expel US troops this year. While the US is losing big, Iran is only a relative winner, as protests over poor social services and corruption were also focused on Iranian interference. This popular discontent has outsized importance for the region, as it will strain if not break the fibers of the Iraqi state—OPEC's second-largest oil producer.

Finally, Syria. The US is still a player if it keeps troops in the energy-rich east of the country (though a withdrawal of US forces from Iraq would undermine US supply chains, intelligence, and operational support). But it's played a poor hand; in fact, neither Barack Obama nor Trump has had a coherent Syria policy. Vladimir Putin won the war with help from Tehran. The outcome has led to increased Russian prestige and influence, especially in the Middle East. Significant sway for a country with a poor human rights record and a tradition of hacking into other nations' affairs is not stabilizing. Meanwhile, Iran's interest in Syria is about a land-bridge to Hizbullah, not improving the lives of the population.

Feckless US policy in Iran, Iraq, and Syria will drive regional risk in 2020, to the detriment of the regional political and economic order.