Eurasia Group | Risk 4: MNCs not to the rescue

Risk 4: MNCs not to the rescue 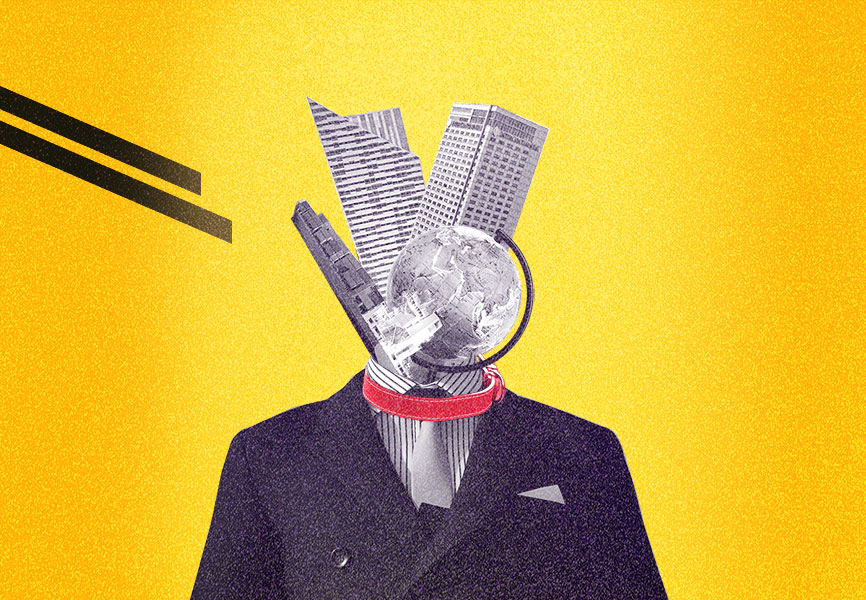 In January, our risk #4 described how multinational corporations (MNCs), far from compensating for the shortcomings of underperforming national governments on critical issues such as climate change, poverty reduction, and trade liberalization, would face new pressures from political officials, both elected and unelected. Politicians working to manage slowing global growth, widening inequality, mounting populist threats, and intensifying security challenges created by new technologies would assert themselves at the expense of MNCs. In this more difficult global environment, corporate leaders would be more focused on their bottom lines, not less.

Multinational corporations are already hit hard by the outbreak. Economic stimulus will dominate the geo-economic landscape, and that will frequently mean higher taxes on MNCs and other entities to pay for them. Health-focused regulations will increase dramatically, raising costs. And the outbreak will force MNCs to shorten supply chains, build redundancies, and manage a virtual work force—a recipe for financial and management stresses. But it's not all bad news. With governments consumed by public health crises, there will be little bandwidth for aggressive tech regulation initiatives, for example. And many MNCs will have an opportunity to step up and play leadership roles as governments falter, whether by helping officials conduct coronavirus testing or by developing new teleworking and paid sick leave practices. 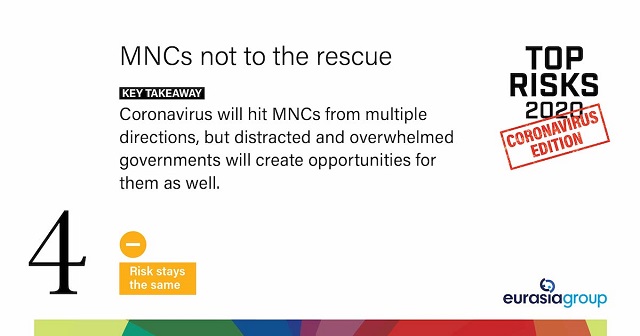 MANY OBSERVERS BELIEVE MULTINATIONAL CORPORATIONS (MNCs) WILL FILL THE GAPS IN GLOBAL GOVERNANCE AND THE LIBERAL ORDER LEFT BY THE G-ZERO WORLD. Specifically, the private sector will step in to lead in areas such as climate change, poverty relief, and even trade and investment liberalization. We're skeptical. Especially as corporates face a significantly more confrontational regulatory and geopolitical environment in the year ahead.

Since World War II, US-led globalization has been a boon for MNCs, as it expanded and entrenched global supply chains based on cheap labor and resource inputs from around the world. They now account for more than 50% of global trade, one-third of global output, and about one-quarter of global employment. MNCs have become influential political actors as governments shaped global trade, regulatory, and tax regimes in their favor. And the firms have in turn exerted influence on policy. Markets overseas where MNCs from the United States invest in manufacturing receive lower tariff rates from the US government. So too, World Bank projects involving MNCs are more likely to get better financing terms because of their ability to influence the bank's largest governmental backers.

But today, nation-states are reasserting themselves, presenting new risks to the capital and assets of corporations. Structural factors motivate governments: slowing global growth, widening socioeconomic disparity, rising populism and nationalism, and tech competition between the United States and China that makes trade riskier.

In the European Union, governments are turning to industrial policies to promote domestic firms and counter China's statist approach. In the United States, regulating “Big Tech” is an increasingly prominent idea in politics. US national security officials are pushing to protect critical infrastructure and limit foreign investment, including from third-country firms. They are also attempting to compel Western corporates to embrace a Washington-centric view of “trusted vendors” and ownership transparency as part of broader efforts to curtail US market opportunities for Chinese firms. And even as a divided US Congress stalls changes in some areas, individual states are increasingly regulating on issues from privacy to antitrust. In China, decoupling from the United States translates into more aggressive industrial subsidies in the high-tech arena, from electric vehicles to semiconductors.

It's not just the “move fast and break things” tech firms that face elevated risk. In years past, companies succeeded in “capturing” state institutions to forestall or diminish unfavorable regulations. In the US, firms spent $3.5 billion on corporate lobbying in 2018 and were on track for a similar amount in 2019—up from $1.5 billion in 1998. They will face backlash to these efforts from rising anti-trade populist movements, particularly in developed markets. A win for a further-left candidate such as Sanders or Warren is not our basecase in the US, but the resonance of their economic message will influence more centrist policy thinking on issues such as regulating the private equity industry, enforcing antitrust policies, and controlling pharmaceutical pricing. Both sides of the political aisle recognize the salience of anti-corporate sentiment—a recurring theme for Trump and part of his campaign message in 2016.

Multilateral free trade agreements once gave MNCs leverage to reduce regulatory pressures, or at least make regulation consistent across many markets, smoothing compliance costs. No longer in 2020, as governments instead pursue bilateral agreements that are productive in isolation but create new inconsistencies in global regulations and tariff rates.

Nation-states are reasserting themselves, presenting new risks for corporations.
New regulatory risks will strain corporate reputations and make public and government affairs management more difficult. Government affairs will need to be more involved in strategy and boards more conversant on policy and regulatory risk. Companies can't be all things to all people. They will maximize gains in areas where regulatory pressures align with their core business models (think Apple on data privacy and Tesla on sustainability) while minimizing risks of fallout elsewhere.

The ability of MNCs to generate wealth, growth, and jobs will take a hit. Shareholders will need to adjust expectations. Nation-state pushback comes at a time when earnings projections for next year are already buffeted by geopolitical risk. Investors are balancing the potential for an easing of US-China tariffs against forced technological decoupling and softer economic growth projections in the world's biggest markets. Increasing and more disparate regulatory demands from national governments will add to transaction costs and put further pressure on profits. Data privacy policies in Europe, a digital tax push in the OECD, and an “unreliable entities” list in China are just the beginning of the list of challenges.

And so MNCs won't be as much help with global governance or supporting the global order. Given new headwinds, most will need even sharper focus on their bottom lines. Yet another driver of the G-Zero world.