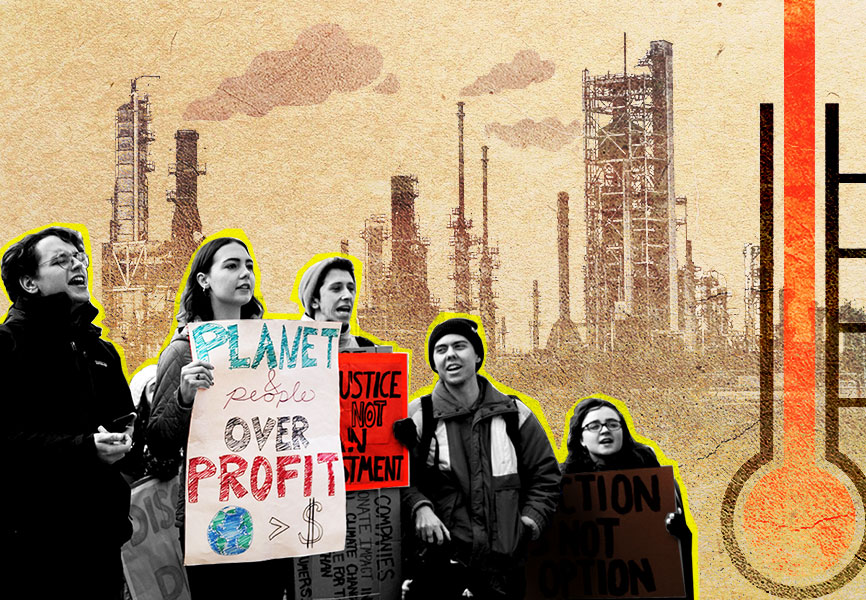 In January, risk #7 described how climate change would put governments, investors, and society at large on a collision course with corporate decision-makers, who would have to choose between ambitious commitments to reduce their emissions and their bottom lines. Civil society would be unforgiving of investors and companies they believe are moving too slowly. Oil and gas firms, airlines, carmakers, and meat producers would feel the heat. Disruption to supply chains would be a meaningful risk. Investors would reduce exposures to carbon intensive industries, sending asset prices lower. All this as global warming would make natural disasters more likely, more frequent, and more severe.

The global focus on coronavirus will come at the expense of attention paid to climate change. Environmental, social, and corporate governance (ESG) investing mandates will become weaker in implementation if not in spirit, as investors and companies pursue recovery and growth above all else. Countries will utilize their fiscal space on targeted measures to blunt the impact of the coronavirus, and whatever is left over for broad fiscal stimulus will only be partially dedicated to “green” projects, and to varying degrees across countries. Further, collapsing oil prices will undercut the competitiveness of cleaner alternative energy sources. With large-scale protest activity diminished because of social distancing, civil society actors will turn to cyber and online tools to apply pressure on companies and governments, most of which will have less appetite and ability to respond to climate change. The immediate risk of a clash between politics and economics over climate change significantly diminishes in the short term, even if the overarching threat of climate change remains as real as ever. 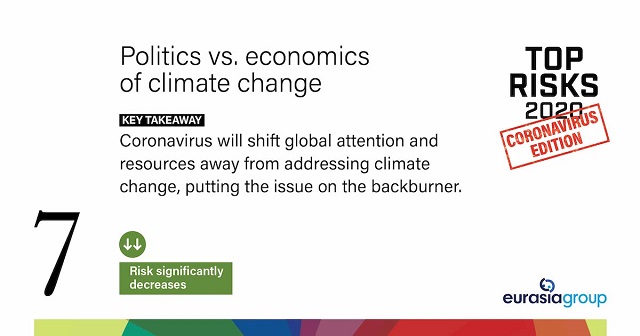 THE POLITICS OF CLIMATE CHANGE AREN'T WORKING. Dozens of countries signed on to the Paris agreement five years ago to limit warming to 2 degrees Celsius by the end of the century. But nation-states have to date failed to implement policies that come close to achieving that goal. This year that failure will lead to suboptimal corporate decision-making, operational business disruptions, and political instability.

The world is currently on pace for a 3.5-degree warming. The world's largest emitter, China, is on a 3-degree path and unwilling to compromise economic growth ambitions on the necessary scale. The US is on a 4-degree pathway that's hard to reverse, no matter who wins the November election. That leaves India as the only country among the top three polluters with a national plan consistent with 2 degrees, though India is already falling behind its targets. 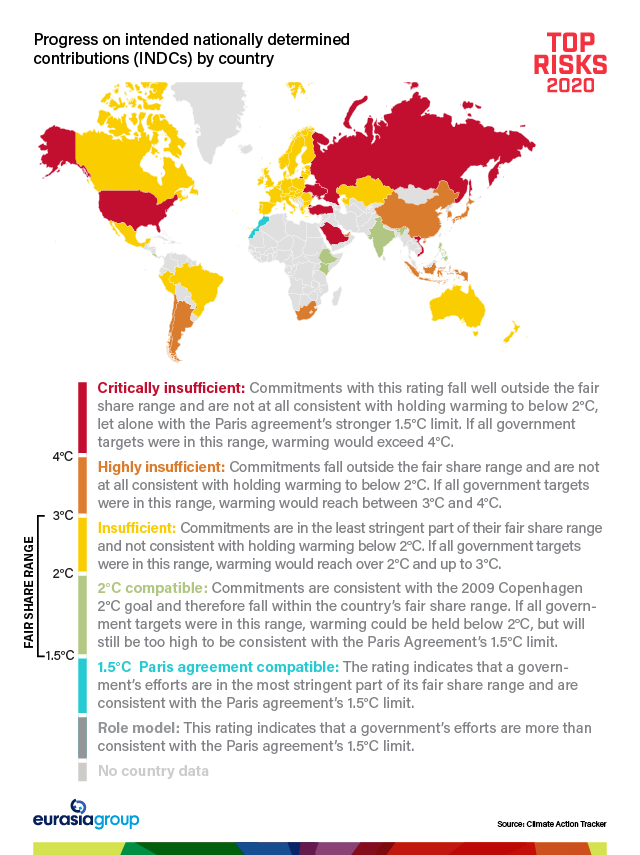 Even countries whose political leaders have ambitious climate plans won't have it easy. Some will face an anti-elite backlash to climate action, as we've seen in France. Others will struggle to meet existing high-bar targets, as in Germany. In the United States, any Democrat running for president will be a “dark green” environmentalist seeking ambitious change—but even if a Democrat defeats Trump in November, progressive climate action will face high legal, regulatory, and political hurdles in 2021 and beyond.

That puts politics on a collision course with a growing percentage of investors, companies, and society at large, which will carry higher costs this year.

Corporate decision-making will face a squeeze. Over one-third of global capital has some type of environmental, social, and corporate governance (ESG) mandate, and trillions of dollars in investment already exclude companies and countries that won't meet the 2-degree threshold. Faced with shareholder activism and pressure from their own employees, and looking to seize business opportunities that arise from becoming more sustainable, more than 600 global companies have committed to reducing their emissions consistent with 2 degrees. C-suites will feel they have to choose between aggressive ESG mandates and their bottom lines.

Politics is on a collision course with investors and society at large.
There's also a growing risk of public unrest over climate, with  increasingly dangerous actions being taken by protesters. Opposition to cuts in fuel subsidies/higher prices will have a direct impact on climate policy and also trigger heavy-handed responses from governments that could push protests out of control.

All of which is happening as a warming planet makes natural disasters more frequent and more severe. For the first time in history, the Anthropecene is itself creating economic constraints on globalization. That requires mention on any global risks list going forward.