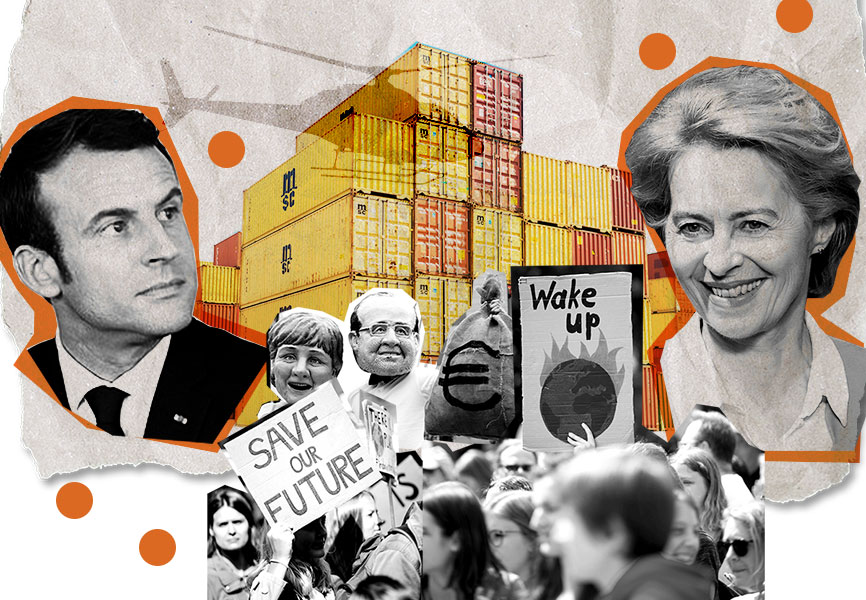 In January, risk #6 described how the European Union aimed to defend itself more aggressively against competing economic and political blocs. On regulation, antitrust officials would continue to battle North American tech giants. On trade, the EU would become more assertive on rules enforcement and retaliatory tariffs. On security, officials would try to use the world's largest market to break down cross-border barriers to military trade and tech development. This more independent Europe would generate friction with both the US and China.

Individual European governments have been late to react to the coronavirus crisis, which is pushing the EU to become more cohesive and act as the critical backstop for the continent. Authorities in Brussels have given Italy more fiscal room to reduce risk and provided both fiscal stimulus and budgetary flexibility with strong agreement among all member states. Trump's decision to target Europe for travel restrictions will strongly encourage the trend toward more independence and increase the transatlantic strains we wrote about in January. If the EU successfully manages the coronavirus response, its leaders may become bolder in pursuing a more independent geopolitical policy. But that's a big if, especially given the likelihood of recession over the coming months. And should that recession be deeper or longer than currently expected, a Europe with a depleted monetary policy toolkit and no shortage of political obstacles to large-scale fiscal stimulus could face a “lost decade” a la Japan. Either way, the pandemic will also blunt some of the other implications of a geopolitical Europe, most notably a more aggressive posture toward Beijing, which is implausible in this environment. 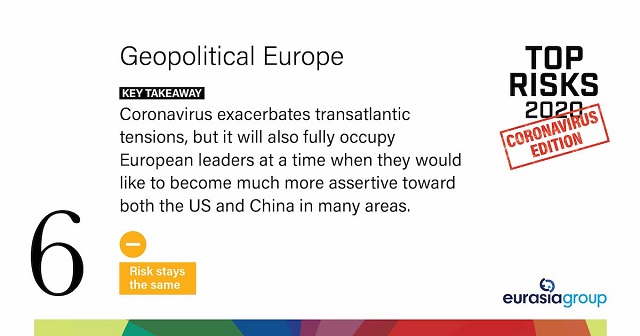 FOR YEARS, EUROPE HAS TALKED A BIG GAME about charting its own course on foreign and trade policy. So far, it has proven unable or unwilling to effectively push back where it disagreed with Washington or, increasingly, Beijing. This is about to change.

The new leadership of the European Commission and the European Union's most powerful leader at present, French President Emmanuel Macron, share a sober view of world affairs. They think the EU has been naive in expecting its main commercial partners to play by the rules and want to equip themselves to react to unfair practices and anticipate further unilateral decisions. European Commission President Ursula von der Leyen and Macron believe the EU should be “the guardian of multilateralism.” That such principles are under attack has convinced von der Leyen that the EU should actively defend itself against competing economic and political models.

On regulation, the European Union's top antitrust official, Margrethe Vestager, is battling North American tech giants through the innovative use of EU state-aid law to question their tax arrangements.

On trade, the EU will bring this more assertive approach to new areas, for instance by making compliance with the Paris climate agreement a condition for new deals and by retaliating in kind against punitive tariffs. Member states and the commission are also putting pressure on China to level the playing field on procurement, with the threat of using new “international procurement instruments” against Chinese firms if European firms don't get improved access to the Chinese market.

On military matters, the EU is not about to stand its own continental army, but it will take steps toward using the world's largest internal market to break down cross-border barriers to military trade and technological development. Seen from the US, this will be an affront, especially since few European capitals have fulfilled their NATO promises on defense spending.

The EU's new leaders think the bloc has been naive in expecting its main commercial partners to play by the rules, and they want to equip themselves to react to unfair practices.
This more independent Europe creates risks with the United States. Washington could lash out at Brussels, especially because Trump is no supporter of the European Union. Retaliatory tariffs are no longer taboo, and a Europe-wide digital tax could provoke punitive tariffs on some of Europe's more export-driven sectors, such as automobiles and consumer goods. Data sharing is also at risk. There is growing concern about the EU becoming too aggressive in pushing its regulatory lead, particularly via the so-far successful General Data Protection Regulation (GDPR). As the European Union takes on US tech giants, the United States is likely to pursue a more aggressive approach to countering the GDPR.

A more geopolitically active EU will also create more tension with Beijing. To date, China has achieved many of its goals in Europe: Firms are still welcome to invest in infrastructure and wariness of China's Belt and Road Initiative (BRI) has yet to spread to most member states. But Beijing fears that Macron will push for more binding EU-wide screening of BRI projects. A tougher EU stance on antidumping will exacerbate tensions. EU-China friction over issues such as Xinjiang and the South China Sea will intensify. Much as China insists that the world accept One China, Two Systems, a more geopolitical Europe will try to insist that China accept One System, 28 States. That's not going to sit well in Beijing. 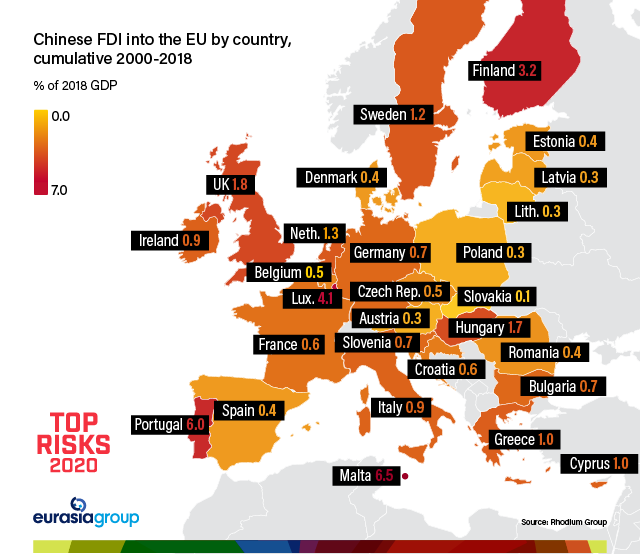