In January, risk #3 argued that as US-China decoupling occurred, tensions would provoke a more explicit clash over national security, influence, and values. The two sides would continue to use economic tools in this struggle—sanctions, export controls, and boycotts—with shorter fuses and goals that were more explicitly political. Confrontation would grow over Hong Kong, Taiwan, the Uighurs, the South China Sea, and a host of other issues.

Washington and Beijing view the outbreak as the next round in their geopolitical rivalry, and that dynamic will continue to shape the global response to the crisis. US officials blame Beijing for causing what they pointedly call the “Chinese” coronavirus and are wary of emergency coronavirus funds from the IMF being used to repay countries' debts to China under the Belt and Road Initiative. Beijing, eager to counter US criticism, will use its success at coronavirus containment to tout its governance model. It will provide financial and medical assistance to friendly countries (including more and more US allies) channeled, when possible, via its own currency and through Chinese-led institutions. As the election nears, a defensive Trump will deflect criticism of his handling of the outbreak by heaping more blame on China, while more confident Chinese authorities will respond in kind (recent moves by Beijing to ban US journalists from the mainland and Hong Kong are particularly noteworthy on that count). Escalating tensions will create more uncertainty around the phase one trade deal, US treatment of Huawei and other Chinese tech firms, and foreign policy flashpoints such as Hong Kong and Taiwan. All this means that a phase two trade deal is nearly impossible, and escalating tensions could unravel the phase one deal itself. There's a growing likelihood that when the coronavirus pandemic is over, the US and China enter a new cold war.

AS THIS DECOUPLING OCCURS, US-CHINA TENSIONS WILL LEAD TO A MORE EXPLICIT CLASH OVER NATIONAL SECURITY, INFLUENCE, AND VALUES. The two sides will continue to use economic tools in this struggle—sanctions, export controls, and boycotts—with shorter fuses and goals that are more explicitly political. Companies and other governments will find it harder to avoid being caught in the crossfire.

This struggle has hard-edged realism—great power rivalry—at its core. It's not yet as starkly ideological as the classic Cold War formulation of capitalism vs. socialism. But as tensions escalate, divergences between the two countries' political structures are bringing irreconcilable differences to the fore. The US-China rivalry will increasingly be waged as a clash of values and animated by patriotic fervor. The United States sees China as a repressive regime that will use its economic clout to punish its foes and limit criticism from overseas, as we saw in the snap NBA boycott in response to an executive's tweet in support of pro-democracy protesters in Hong Kong. China sees the United States as a hegemon that wants to stunt the growth of, and sow division within, its rival, a narrative that Xi has used to enhance the Communist Party's legitimacy and his own consolidation of power.

Divergences between the two countries' political structures are bringing irreconcilable differences to the fore. Thus, the US-China rivalry will increasingly be waged as a clash of values and animated by patriotic fervor.
The trade war has been fought to a standstill and won't go away, with a truce in place but little chance of a breakthrough. The US foreign policy establishment is focused on how to contain China rather than compete with it, amplifying bilateral tensions. China-bashing will feature prominently in the US presidential campaign, and an already China-skeptical Trump will have mixed intentions and limited capacity to stop his administration from taking tough action against China on national security and foreign policy issues.

Furthermore, Hong Kong's political crisis will persist, while Taiwan's January 2020 vote will likely see a reelection of Beijing's foe Tsai Ing-wen, bolstered by stronger nationalist sentiment within the population. The United States will emphasize military and diplomatic support for Tsai's regime and at least moral support for Hong Kong's protesters (driven by Congress), prompting angry objections from Beijing over interference in its domestic affairs. 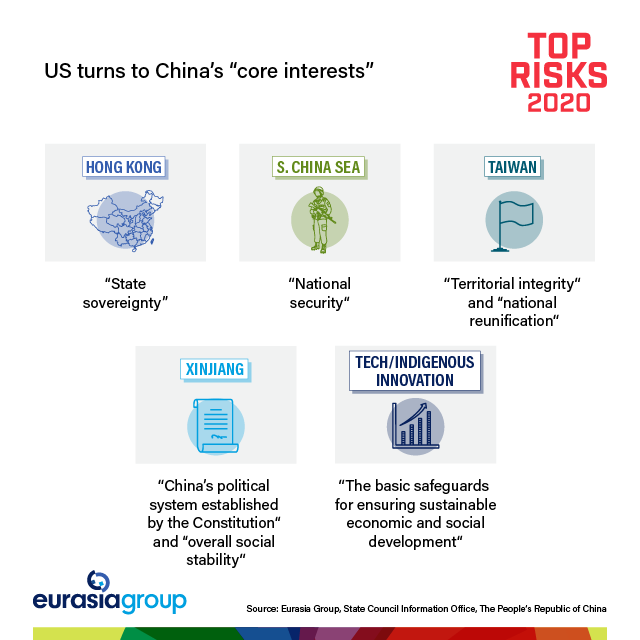 As a consequence, the US will take tough measures against China, including financial sanctions (over Xinjiang, Iran, Hong Kong), designation of officials, technology controls, and efforts to limit US capital flowing to Chinese firms. These actions will also create tail risks for an already softening Chinese economy. Meanwhile, China will punish US and other foreign firms viewed as supporting Washington's “containment agenda.” The “unreliable entities” list will grow longer, and China will continue to restrict space for foreigners by reducing their ability to get visas. The politicization of China's economic relationships will intensify as Beijing looks for ideological “outlets” to vent over an aggressive Washington and slowing economic growth at home.

Meanwhile, as Trump faces a challenging reelection campaign, Xi may test Trump's willingness to push back aggressively in areas such as Hong Kong and Taiwan, sensing that while trade matters for Trump, he is less interested in security questions. That's dangerous, because the US president is unpredictable.

Risk 4: MNCs not to the rescue