Eurasia Group | The five new faces of the EU

The five new faces of the EU 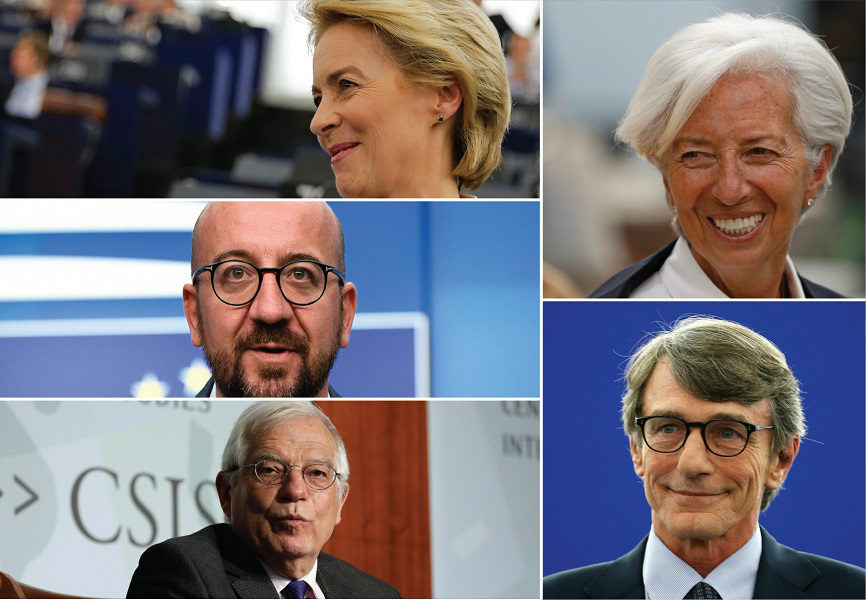 Clockwise from top left: Ursula von der Leyen, Christine Lagarde, David Sassoli, Josep Borrell, and Charles Michel. REUTERS.
Since May's elections for European Parliament, politicians in Brussels and member state capitals have been wrangling over the EU's top jobs. Their final picks showed the enduring outsized influence of France and Germany in the 28-nation bloc, as well as the determination of national leaders to take back control of the process. Eurasia Group experts Federico Santi and Mujtaba Rahman provide an overview of the EU's new leadership.

European Parliament approved Tuesday the nomination of the current German defense minister to fill the top job at the EU's executive arm. Von der Leyen emerged as a surprise compromise candidate as national leaders worked to abolish the so-called Spitzenkandidat system whereby the post would go to a candidate put forward by the party that won the most seats in parliament. This time that was European People's Party's Manfred Weber, a German politician who was widely opposed, including by French President Emmanuel Macron.

Von der Leyen speaks flawless French and good English. Like Macron, she supports EU reform and greater integration of member states' economies and will probably become an even more energetic advocate in her new role. As a German, she is presumably better positioned to sell Germans—traditionally jealous of their sovereignty—on greater integration. Though German Chancellor Angela Merkel had supported the Spitzenkandidat Weber, the nomination of another German from the European People's Party to replace him provided a face-saving solution. On a negative note, von der Leyen won confirmation by a very slim margin and has a parliamentary inquiry over procurement irregularities hanging over her at home in Germany.

European finance ministers have approved the nomination of the current head of the IMF to lead the world's second-most important central bank after the US Federal Reserve, marking the second time a French candidate has been tapped to head the bank in its 21-year history. Unusually for a central bank chief, Lagarde is not an economist and has no central bank experience. Still, she has long held top jobs in finance—in addition to her job at the IMF she served as French finance minister—and she has solid pro-EU credentials.

More importantly, Lagarde has high-level political relationships across the continent, an important qualification to head the central bank of a less-than-perfect political union. This will be important in helping to steer the broad debate over economic policy. At the IMF, Lagarde has advocated better coordination between EU fiscal and monetary policy. No big shift from the current stance is therefore likely—either on rates or on the balance sheet. Moreover, Lagarde's high-level relationships will also be crucial in times of crisis, when she will have to build consensus across the Eurozone for non-conventional measures. Still, her lack of technical expertise in this highly technical job could yet prove detrimental.

Though with Sassoli's appointment Italy held on to the job up at the European Parliament, its overall representation at the upper echelons of the EU has declined—it had also previously held the ECB presidency and the job of foreign policy chief. This declining clout is the result of the Italian government's openly euroskeptic stance and erratic economic policy. (Interestingly, Sassoli was chosen from a party that is in the opposition in Italy). Moreover, Rome's primary focus recently in negotiations with Brussels has been to stave off an infraction procedure for its failure to comply with EU debt and deficit rules. In a sense, the government achieved this objective, but at the cost of relinquishing whatever leverage it had in the top jobs discussion.

The death of the Spitzenkandidat process points to a lesser role for parliament within the EU, and Sassoli is unlikely to vigorously challenge that that status quo as he owes his position to the same closed doors horse-trading that brought von der Leyen to the European Commission.

The presidency of the European Council—an organ representing member state governments at the EU—is a relatively new role that has had only three occupants so far. This is the second time it has been entrusted to a Belgian. The country's federal politics, so reliant on cobbling together unlikely coalitions, means Belgians have a talent for brokering difficult compromises between heads of state and government.

However, Michel owes his position to more than just his nationality. In particular, his relationship with Macron has helped his candidacy, which goes beyond their shared language. His slow rise through Belgium's fragmented politics was obviously less remarkable than that of Macron and his La Republique en Marche (LREM) party. Yet, Michel's centrist Mouvement Reformateur can be seen as precursor to the LREM. Their ideological bases are very similar: socially liberal, but pro-markets; pro-EU, but not committed to either of the formerly dominant groups in the European Parliament.

The selection of Borrell as the EU's new foreign policy chief, was a partial victory for Spain, giving the country its second high-level position (Spaniard Luis de Guindos is the current ECB vice president). It reflects Spain's growing importance in the EU and within the two main European political groups (the European People's Party and the Socialists & Democrats), by virtue of its strong economic recovery and consistent pro-EU stance.

Borrell (72 years old) himself is a less than inspiring pick for this demanding post, whose limited and ill-defined powers mean that personality can make a big difference. Despite her young age and lack of experience, Federica Mogherini, his Italian predecessor, had succeeded in building consensus across the EU and achieving notable results on several key issues. These successes included helping to broker the Iran nuclear deal in 2015 and, more recently, the agreement to change Macedonia's name, paving the way for the Balkan country to potentially join the EU and NATO.

Watch Mujtaba Rahman and Federico Santi's Facebook Live discussion on the EU's new leadership, and check out European Populism in our Top Risks for 2019 report.