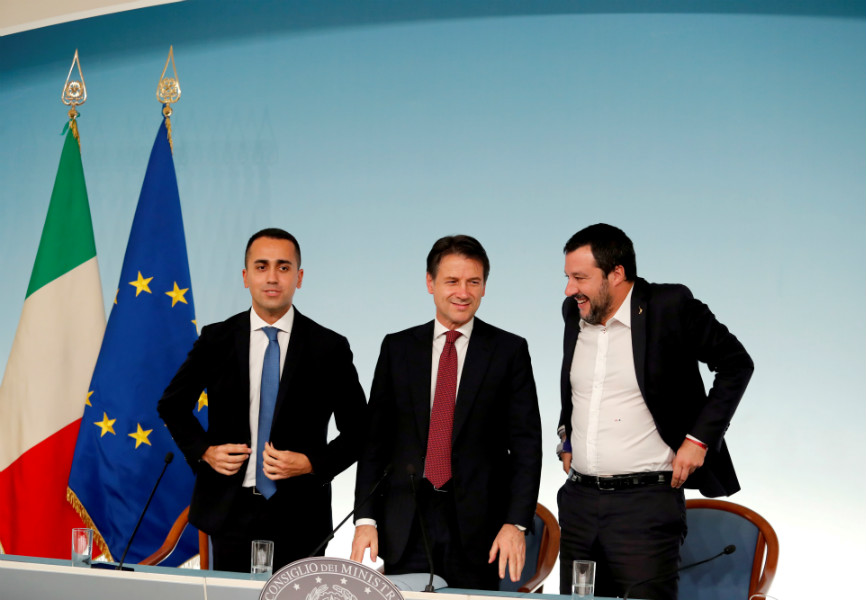 Five Star leader Luigi Di Maio, Italian Prime Minister Giuseppe Conte, and League leader Matteo Salvini. REUTERS.
Once again, Italy and the EU are headed toward confrontation. They fought a protracted battle last year over the impact of Italy's budget on its debt before arriving at a compromise in December, but the problem has re-emerged, and it's not clear whether a larger fight can be avoided.

In recent days, Italy's technocratic prime minister has pledged to resign if leaders of the Five Star Movement and the League, the two parties that make up the country's fractious coalition government, fail to put aside differences to agree on a budget the EU will accept, one that won't saddle Italy with ever more dangerous levels of debt.

At first, Prime Minister Giuseppe Conte's threat seemed to have worked. League leader Matteo Salvini and Five Star head Luigi Di Maio emerged from a meeting on June 10 talking of a “shared goal” of avoiding EU action against Italy “while safeguarding economic growth, employment, as well as tax cuts,” according to a statement from Salvini. “I'm not interested in fighting with the EU,” Di Maio said on June 11, “but we must get the results Italians are interested in.”

The reasoning is straightforward. Italy's economy is weak; the Bank of Italy has cut its 2019 economic growth forecast to 0.3%. Five Star wants to respond by spending more to help people manage hardship, creating a minimum wage and continuing a “citizen's income” scheme, similar to the idea of basic income. The League wants sharp personal and corporate tax cuts that its leaders say will jump-start growth and reduce unemployment.

But the EU says Italy is already on track to spend too much. Its rules say Italy must keep deficits at 3%, and the European Commission has forecast a nominal deficit of 3.5% for next year. Italy's budget will violate EU rules. The only real question is by how much–and what Brussels will do about it.

EU fears are well founded. Italy's €2.3 trillion ($2.6 trillion) debt is about 132% of its 2018 economic output. Only Greece is in worse shape, and Greece's economy is small enough that it can be bailed out. Italy's economy, the Eurozone's third largest, is far too big for that.

That's why Italy's worries are well founded too. The EU has power to impose fines, cut funding, and order Italy to cut spending and raise taxes to meet its commitments. The greater concern is market fear, underlined by Prime Minister Conte, that ratings agencies could downgrade the country's credit rating, making it more expensive for Italy to borrow. EU action, even if it doesn't come with specific penalties, makes these troubles more likely.

Underneath the market jitters are fresh concerns that Five Star and the League are competing with each other to please voters in advance of potential snap elections. Five Star remains the coalition's senior partner, but it's the League that is gaining popularity and political momentum. Both sides know that austerity measures will anger the electorate, and both have won votes in the past by attacking the EU and its rules.

The risks of defying those rules forced the two populist parties to climb down last year. That will probably happen again. But this year, Italy's debt could cause more than just political infighting—it could lead to Europe's next major crisis.

Risk 7: Protectionism 2.0
SUBSCRIBE TO SIGNAL
LOUD WORLD. CLEAR SIGNAL. Signal is a newsletter on international affairs produced by GZERO Media four times a week. No jargon, no nonsense, no noise. Signal is a product of GZERO Media, a Eurasia Group company.