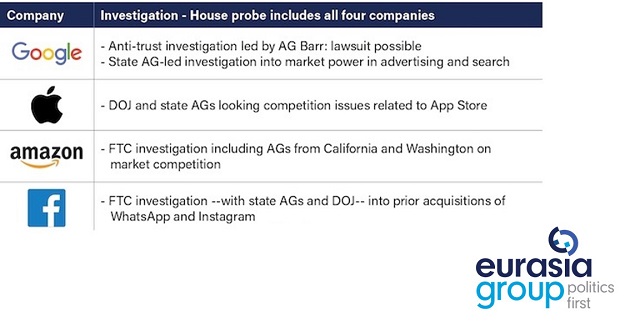 Barr has criticized internet companies for “being more selective” about the content they allow on their platforms and “starting to censor different viewpoints,” noting that one way internet sites' power over public discourse could be addressed was "through the antitrust laws and challenging companies that engage in monopolistic practices.”

Of all the Department of Justice's (DOJ) recent investigations, its inquiry into Google is furthest along, with an emphasis on the company's use of online ad technology and tools and the company's third-party advertising operations. Mounting political pressure could push a lawsuit before the November election—most likely a civil case that could lead to a trial or settlement. This would be the first major US antitrust case involving the tech sector since the late 1990s and could drag out for years and across administrations. DOJ is unlikely to push for a breakup of the company but may seek to impose fines. Similar efforts in the EU have resulted in $9 billion in fines against Google since 2017, with an emphasis on its influence over the online search market and Android mobile operating system. US tech platforms have argued that actions against them empower large Chinese platforms, and that argument may yet prevail with the Trump administration.

The House Judiciary Committee's Subcommittee on Antitrust, Commercial, and Administrative Law is also looking into major US platforms and tech companies, with the chief executives of Facebook, Amazon, Apple, and Alphabet, Google's parent company, due to testify before the committee. The subcommittee has been actively probing the state of digital competition, including how large internet platforms use personal data. It has also investigated their “gatekeeper power,” or how they set terms and conditions for other companies to access services like online ads or app stores, which many smaller businesses that offer competing products rely on to reach their customers.

An area of bipartisan concern is Section 230 of the 1996 Communications Decency Act, which shields companies from liability for content posted by users on their platforms, as well as companies' decisions about moderating content. But the two parties disagree on the nature of the problem, with Republicans more concerned about perceptions of anti-conservative bias and Democrats worried about the spread of disinformation, hate speech, and other problematic content.

Though the US Senate Judiciary Committee unanimously approved a bipartisan bill that would strip Section 230 protections from companies that host child sexual abuse material, Republicans and Democrats' differing views over platforms' treatment of political speech and other content that is not strictly illegal makes it unlikely that lawmakers will come together to pass broader Section 230 reform over the next 12 months, despite a recent Trump Administration executive order following Twitter's decision to append a fact-check notice to one of the president's tweets. If Democrats regain control of the Senate, this calculus could change.

Under a second Trump term, Barr would be likely to stay on as attorney general and move forward existing cases on content and alleged censorship of partisan views. While more populist members of Congress like Senator Josh Hawley (R-MO) would prefer a stronger government hand in regulating tech companies, Barr—a former corporate lawyer—appears likely to seek more limited remedies.

These concerns would also continue under a Biden administration. Biden has criticized social media platforms over content handling and proposed a minimum federal tax targeting Amazon. On the other hand, Biden would be likely to bring on former Obama administration officials who went to Silicon Valley before returning to the White House. They would clash with more activist and tech-skeptical liberal advisors who have emerged as prominent industry critics in line with concerns expressed by Senator Elizabeth Warren (D-MA). This latter group will quickly ramp up development policy frameworks around key issues such as content and antitrust, putting pressure on the administration to consider a more activist policy.