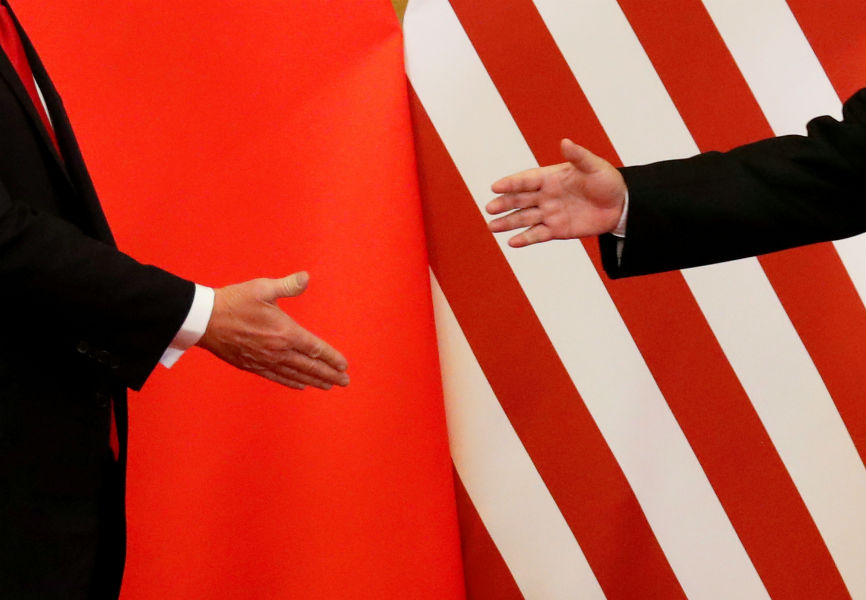 US President Donald Trump and Chinese President Xi Jinping shake hands. REUTERS.
The British government announced that UK telecom carriers will be banned from installing new Huawei equipment for their 5G network by year's end, effectively cutting China's tech champion out of the country's 5G future … a future which Chinese companies had grand plans to dominate. It's time we acknowledge that the US fight for tech supremacy versus China has been the single most successful foreign policy of the Donald Trump administration. It's not even close.

When Eurasia Group first wrote about the global tech cold war back in 2018, it wasn't clear the Trump administration would be able to pull this off. Far from it.

Yes, the US had the advantage going into the battle, but China had spent the better part of the last decade frantically playing catch up, from plowing resources into market leaders like Huawei to engaging in alleged corporate espionage and IP theft to get China's technology capabilities to the point where it could realistically compete with the US, if not always on innovation than at least on price. (Beijing denies systematically stealing US IP.)

Before the current Trump administration, the US government's tech policy was effectively allowing Silicon Valley companies to steer the course for the country's tech future, with Washington responding as necessary.

Meanwhile, China had announced a strategy to dominate the world of 5G technology, seeing it as the highway to its geopolitical supremacy. It was inevitable that China's publicly backed tech ambitions would someday clash with the US's private sector-driven approach; under Trump, it finally has. And while the tech fight often gets folded into Trump's broader all-out fight with China—a fight that still has a ways to go and is being waged across multiple fronts (among them Hong Kong, Xinjiang, trade, and the South China Sea)—the tech component is starting to yield real results.

Countries like Canada, Australia, New Zealand, and Japan have all cut out Huawei from their 5G infrastructure plans at the urging of the US. Europe has been more hesitant; while Poland, the Czech Republic, Estonia, and a few others have pledged to keep companies like Huawei out of their future infrastructure, bigger hitters like Germany, France, and Italy have taken a more cautious approach to blanket bans against Chinese hardware in their telecoms systems, though critical decisions are expected to be made in the next few months.

That's what makes the UK decision so significant. The move has the potential to cost the UK upwards of £7 billion and hold up 5G rollout in the country by three years. The British government has been agonizing over the decision for months, but what ostensibly pushed them to take the decision was US sanctions against Huawei that forced the company to seek third-party vendors for some of its hardware, introducing new cyber security threats that the UK would rather avoid (alongside the ire of the US, especially post-Brexit). Other European and Western holdouts will find it difficult to ignore those same considerations when planning for their own 5G futures.

And to his credit, it was under Trump that the issue of tech divergence with China has been prioritized, exposing and publicizing the challenge of a system that potentially gives an authoritarian, state capitalist country such wide-ranging data and surveillance capacity. The Trump administration instituted yet more restrictions on Huawei, just the latest in its months-long push to get allies to fall in line with its adversarial tech approach toward Beijing.

It's the effectiveness of this last bit that is most surprising—this isn't exactly friendly multilateral diplomacy. Not many countries would willingly cede to the demands of a White House better known for browbeating traditional US allies than diplomatically engaging with them in good faith.

But there are two critical things the US, and by extension the Trump administration, has going for it when it comes to tech. The first is Silicon Valley; for all the billions China has pumped into its own tech industry, the most innovative and cutting-edge tech and talent is still coming out of the US. What's more, under Trump tech in the US has gone from being just another industry to a critical strategic sector, which will continue no matter who wins the upcoming presidential election in November. Of course, there is a real concern that the continued success of this tech decoupling will ultimately limit the talent available to Silicon Valley and deprive them of the massive Chinese consumer market, which will in turn hit their R&D budgets and ability to innovate … but that's a problem for the next president (though maybe Trump's if he wins a second term).

The second thing the Trump administration has going for it is that despite Trump's unorthodox style of diplomacy, at this point a decoupled tech sphere between China and the West is the preferred policy and strategic outcome of virtually every US ally given current geopolitical realities. When the alternative is China potentially using its own dominant position in the market to divide and conquer—a particular concern for the EU that has seen China making aggressive moves into the union's eastern bloc—that focuses minds fast. When your country's tech future is at stake, you care less about the person sitting in the White House than the actual policy coming out of that White House.

America First has often been criticized as America Alone. And that's a fair criticism. But on the issue of tech decoupling, it's America out front … with most allies on board. And for Trump, that's far and away his biggest foreign policy win.