THE PACE OF EXCITING technological breakthroughs is quickening. In recent years, the communications revolution empowered individuals by giving them unprecedented access to information and by boosting cross-border collaboration. Today, the big topic is data and, increasingly, the AI revolution, which empowers hierarchical organizations to control and sift that information. But this latest wave of innovation is taking place at a time of broader tensions within the internet and technology spaces that will play an important role for global markets in 2018.

Long term, the convergence of AI, big data, and ultra-fast networks is the game changer. It's an unprecedented social experiment: getting smartphones into the hands of every young person with economic potential, allowing them to interact with the world, and seeing what happens as they grow up. This will become a much bigger deal over time. As our cars, homes, factories, and public infrastructure begin to generate mountains of data, and as connectivity morphs into augmented reality, a new generation of humans will be “on the grid” around the clock, with important implications for society and geopolitics. But until we get there, it's the world's biggest fight over economic power.

A race for breakthrough technology is underway between the US and China. Both countries' tech giants are speeding to master AI and supercomputing among other highly investment-intensive, next-generation technologies. The winner could well dominate the coming decades, both economically and geopolitically. Dividing lines are growing sharper: The US still has the best talent, but Beijing is training many more technologists. China will continue to plow money into its homegrown research and hardware sectors, while the US struggles with less control over its private-sector top performers than Beijing. The race is a tight one.

A struggle for market dominance will continue to rage in third-party countries and regions that will have to decide whose products and standards to embrace. Think Africa, India, Brazil, and even Europe. China and the US are engaged in a global competition to be the lead technology supplier for their various international partners. This fight plays out in three areas: civilian infrastructure (from fiber-optic cabling to cloud storage), in consumer goods (putting next generation smartphones in every hand), and in government procurement and security equipment. The latter is of utmost importance, as—just like the traditional arms deals of yesteryear—a linkup between two governments on cybersecurity creates long-lasting technical dependencies that translate into strong political ties. Traditionally, China has benefited from distrust felt toward the US following the Edward Snowden revelations, as well as from cheaper prices, while quality was its weak spot. But today these paradigms are being called into question as China's products become ever-better just as Europeans and others begin to question the security challenges of doing tech business with Beijing.

Fragmentation of the tech commons is the last major effect of this global tech cold war. China's 700 million-plus internet users remain behind the Great Firewall. China, Russia, and other countries that want a tight grip on information flows are implementing tough cybersecurity laws and considering erecting barriers to the flow of data across borders as they move to reduce their dependence on the Western hardware and software that underpins their own cyberspace. The US is also taking a harder line on foreign investment in US tech firms, partly in response to China's rise, partly in response to fears over cybersecurity threats, while a data privacy-obsessed Europe keeps a wary eye on US electronic surveillance.

Fragmentation creates market risks as state-promoted and private-sector corporations begin to function as quasi-monopolies in their respective spheres of influence. Markets become less competitive and, therefore, less efficient. Perhaps most importantly—and immediately—security erodes too. It's harder to guard against global viruses with domestic antivirus companies or to innovate in the absence of international partnerships. None of this will stop the march toward a new economic and political order reshaped by technology, but it will make it much messier. 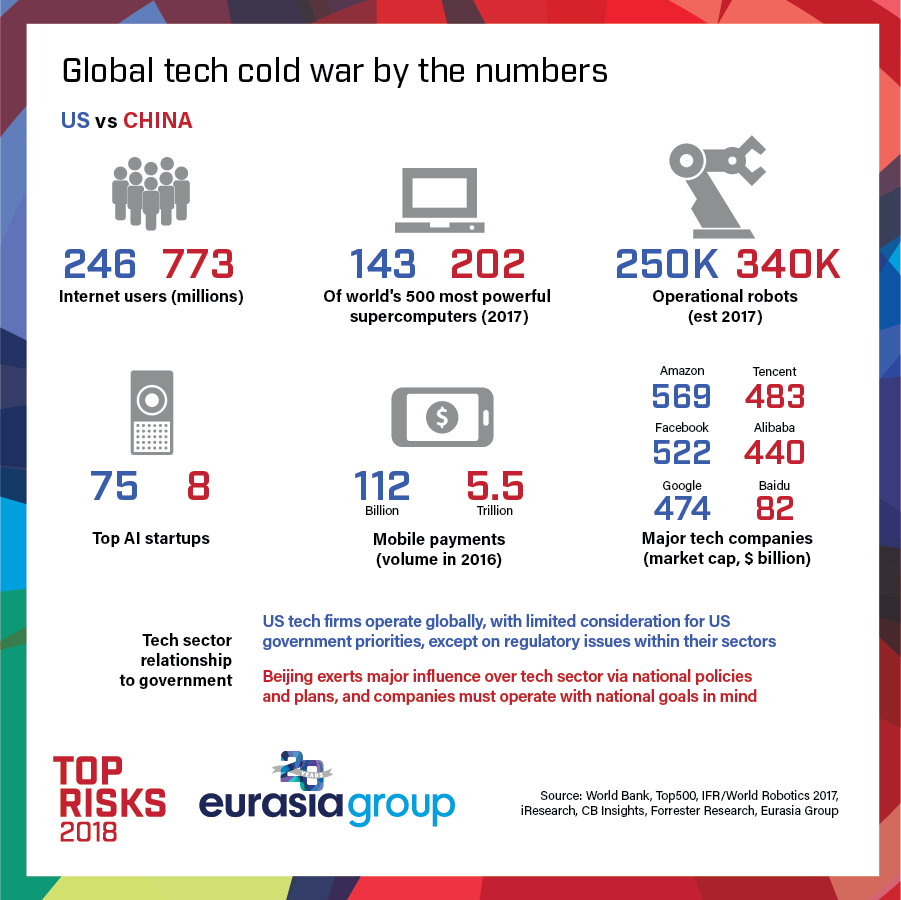