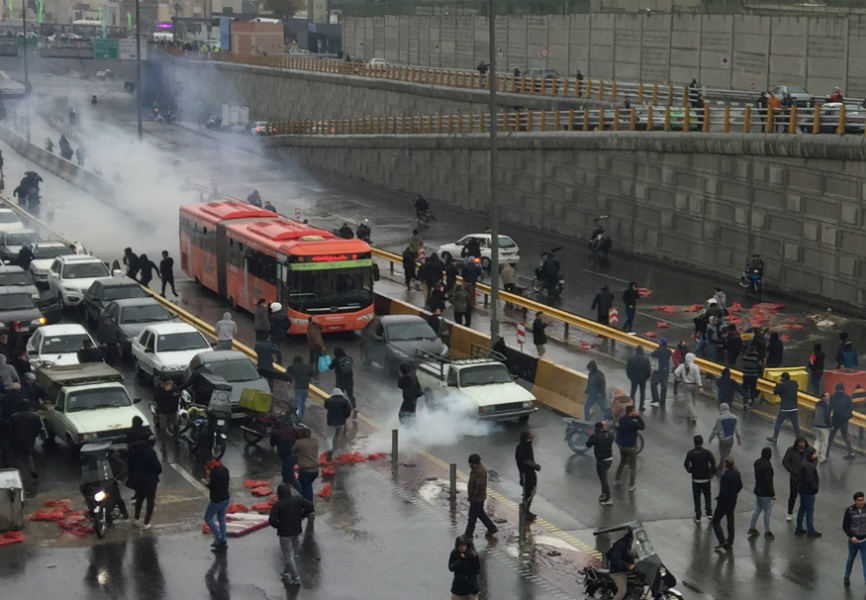 Iranians in Tehran protest against a gas price increase. REUTERS.
Tens of thousands of Iranians have taken to the streets in protest against a gasoline price hike, a new challenge for a regime already suffering from an unrelenting US economic pressure campaign. But the authorities have vigorously responded with a security crackdown that has caused over 100 deaths and thousands of injuries and the country's biggest ever internet blackout. As Eurasia Group Iran expert Henry Rome explains, the fuel policy change will likely strengthen Iran's economic position even as the protests erode the regime's popular legitimacy.

What triggered the protests and can they undermine the government?

As in many countries, tinkering with the price of gas is politically explosive. That's especially the case in Iran, which is endowed with enormous energy resources and sells gasoline to citizens at one of the lowest prices in the world. Many government officials and independent economists have long criticized the fuel subsidies, which cause overconsumption, corruption, and smuggling. While the administration sees the reform as smart fiscal policy, many Iranians are deeply distrustful of the government and doubt it will follow through with its promise to offset the reform's impact with cash handouts for 18 million households. Since Friday, the protests have evolved to include a stridently anti-regime and violent tone, with attacks on gas stations, banks, and government offices. Still, they are very unlikely to undermine government stability. Iranian leaders can lean on a fiercely loyal cadre of Revolutionary Guard and Basij militias who have little compunction about killing their countrymen, while the internet blackout ensures that protesters cannot effectively coordinate their activities. And the regime has remained united. Officials from Supreme Leader Ali Khamenei on down have announced support for the reforms, giving little room for compromise. Under severe pressure, the protests will likely fade away in several weeks.

Will the unrest have any geopolitical fallout?

The protests further reduce the odds of negotiations with the US over the next year. The point is somewhat counterintuitive: If Iran faces greater public pressure over the state of its economy, wouldn't it be more open to negotiating sanctions relief? The issue, however, is that the Iranian leadership does not want to take any steps that would “validate” the US pressure campaign. Making concessions to Washington following public protests would send a message of weakness that Tehran will try to avoid at all costs. Instead, Iran will continue to lash out in response to the US campaign. It will likely resume periodic attacks on commercial shipping in the Middle East and will also continue to expand its nuclear program in violation of the 2015 nuclear agreement. Earlier this month, Iran announced it would resume uranium enrichment in the Fordow facility, its most flagrant violation to date. Washington and European capitals criticized the latest nuclear steps but have not increased sanctions in response.

How will the gas measures help the government?

The reforms will strengthen Iran's ability to withstand US economic pressure in the coming year. The government said the price increase will net about 36 trillion rials over the next year ($300 million) for state coffers. That's not a huge sum, but it will help plug the hole left by the sanctions-driven loss of oil revenue. Meanwhile, the promised cash transfers will help stimulate domestic consumption, although it will risk fueling inflation. More importantly, reducing gasoline consumption and smuggling will leave more for export. Like crude oil, purchasing Iranian gasoline is subject to US sanctions, but gasoline is far easier to trade illicitly. That means a potential new revenue stream for the cash-strapped government.

What has been the impact of the sanctions the US re-imposed a year ago?

The return of US sanctions caused a major shock. The Iranian economy immediately tumbled into recession, inflation soared, and the currency lost two-thirds of its value. Yet the economy is starting to stabilize and adapt to US pressure. The IMF and World Bank estimate that GDP will grow by less than 1% in 2020 after a steep decline of nearly 10% in 2019. The economy will be a shell of its former self—in constant prices, GDP will return to 2015 levels—but it will be stable. Employment numbers are also improving, led by the non-oil sector. Meanwhile, Iran has steadily bolstered its geopolitical position against Washington. It launched attacks against commercial shipping, oil infrastructure, and it even downed a US surveillance drone—all without facing any military retaliation. Iran has driven a wedge between the US and Saudi Arabia, while it has caused Israelis to wonder whether the US would come to their aid in the case of war. The lost US credibility will not easily be repaired.