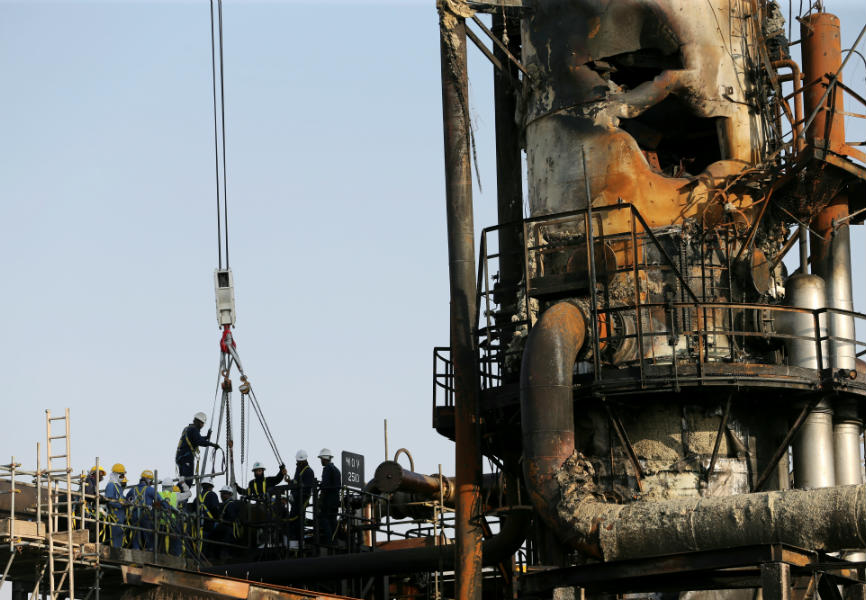 Workers at a damaged Saudi Aramco oil facility. REUTERS.
Iran's alleged attack on Saudi oil facilities was a dramatic escalation in its shadow war with the US and a clear sign that Tehran's previous strategy was not working.

The big picture: Since May, Iran has tried to counter US sanctions by tormenting the oil market with small-scale attacks, such as placing mines on ships in the Persian Gulf. Its goal has been to drive oil prices higher and thus raise the costs of the US “maximum pressure” strategy.

Where it stands: Iran's tactics left the oil market largely unfazed, for two main reasons: Between the lines: To get the world's attention, Iran needed to make a bigger splash. That's where the Saudi attacks came in: With a handful of drones and cruise missiles, Iran knocked more than 5% of global crude production offline in a matter of minutes.

What's next: Iran will be closely watching next week's meetings at the United Nations to see if its message has gotten through—specifically, whether any sanctions relief is in the cards. This originally appeared in Axios. Go deeper: Read more at the Atlantic Council's New Atlanticist blog.