Eight years on, Arab Spring a distant memory in Egypt 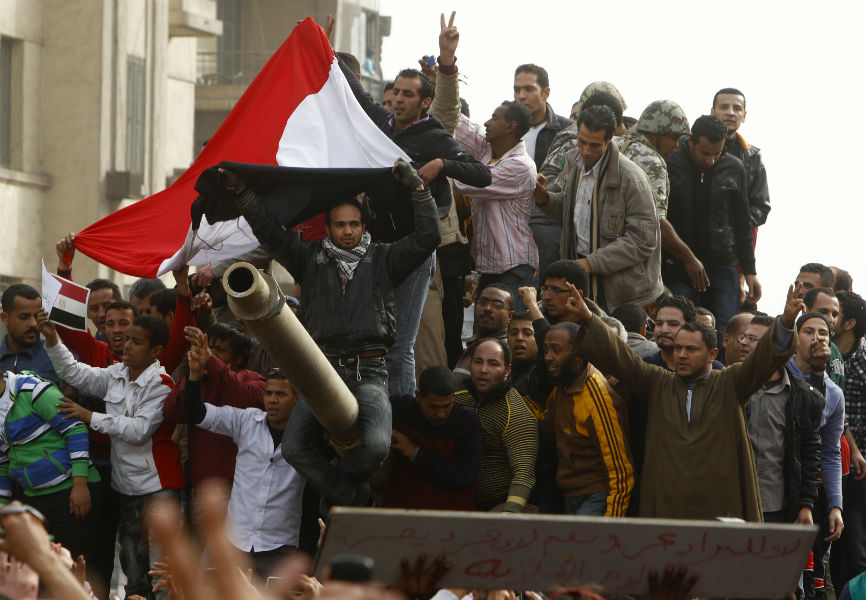 Demonstrators celebrate atop an army tank in Tahrir square during protests in Cairo January 29, 2011. Egyptian President Hosni Mubarak refused on Saturday to bow to demands that he resign after ordering troops and tanks into cities in an attempt to quell an explosion of street protests against his 30-year rule. REUTERS/Yannis Behrakis
On 25 January 2011, mass protests erupted in Cairo's Tahrir Square, leading to the ouster of president Hosni Mubarak after 30-years of iron-fisted rule. It was a pivotal moment in the region's Arab Spring, pro-democracy movement. Eurasia Group experts Mylene Tisserant and Sarah Alshaalan take stock of the situation in the country eight years later.
What is the legacy of the Arab Spring?
With the chant, “bread, dignity, freedom,” thousands of Egyptian protesters succeeded in overthrowing Mubarak's authoritarian regime after 18 days of demonstrations. But despite their cries for change, people could not agree on what type of political and economic changes they wanted. The Islamist Mohamed Morsi rose to power, and great turmoil followed, paving the way for the emergence of a new strongman leader—Abdelfattah el Sisi. To consolidate his position, the former general has ably exploited fears of instability by constantly referring to the threat posed by jihadism and chaos in Libya, Syria, and Yemen. Egypt today is no closer to freedom and democracy than it was eight years ago. The economic picture might look a little brighter, as the regime has implemented much-needed reforms, but these have been accompanied by a tighter grip on power. Sisi's government has institutionalized a new authoritarian doctrine.
There was a strange recent episode in which Sisi tried to walk back comments made in a US television interview. How strong is Sisi's position today?
Sisi tried and failed to block the airing of an interview with 60 Minutes in which he confirmed for the first time military cooperation with Israel to fight the Islamic State in the Sinai Peninsula. The admission could put him in a delicate situation regionally as Egypt is currently acting as a mediator in a process of reconciliation between Fatah and Hamas, and it triggered a firestorm of domestic criticism on social media. Still, Sisi received strong messages of support from some quarters—most importantly, the military. After several waves of appointments and personnel shuffles over the last few years that placed loyalists in key positions, Sisi has limited competition from other figures or power centers. Most recently, his chief of staff Abbas Kamel was appointed to head the powerful General Intelligence Service. Egypt's military is a complex organization, but the vast majority of the leadership and cadres are highly supportive of Sisi and his success in stabilizing the country's economy and politics.
What's the biggest challenge facing the country over the next decade?
Despite the current stability, deep-seated problems remain. The biggest of these is the lack of new job creation, which is partly tied to difficulties in attracting foreign investment given the country's excessive layers of bureaucracy. But the more important factor is the outsized role of military-related enterprises, which discourages private-sector investment, especially from local players but also foreign ones. Other problems include crumbling infrastructure that needs significant upgrades, but investments are unlikely to be forthcoming unless the entire business environment changes. The country's social safety net is vulnerable and government programs are not targeted to effectively reach all low-income individuals and families. Lastly, outside the top layers of the council of ministers, the ministry of finance, and the ministry of investments, government institutions need better-qualified personnel.
What would it take to see another popular uprising in Egypt?
Though under Sisi's rule the country is much more politically stable than it has been in years, Egypt needs to address its economic problems. Over the long term, with a frayed social fabric and large swaths of the population unemployed or working in the informal sector, the status quo appears quite difficult to sustain. Discontent could grow bolder over time and Sisi's political capital will inevitably decrease. Another Tahrir-like uprising calling for change seems unlikely at present: Severe restrictions on political activity and a security-oriented nationalist ideology have largely curtailed dissent. But if authorities fail to deliver greater prosperity for more Egyptians and the repressive conditions continue, then eventually another mass wave of protests will come to life