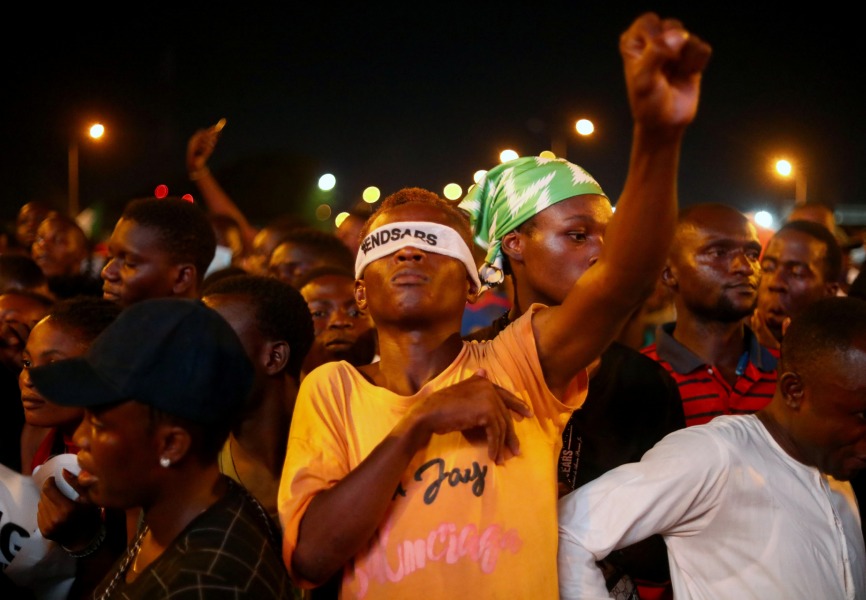 A demonstrator at an End SARS protest against police brutality in Nigeria. REUTERS.
Long-running demonstrations against police brutality this week shut down Nigeria's largest city, Lagos, and produced multiple violent incidents across the country's southwest. The descent into violence has sapped momentum from the protest movement known as #EndSARS—a reference to the Special Anti-Robbery Squad (SARS), a police unit implicated in extrajudicial killings of Nigerian youth. Nonetheless, the unrest signals a political awakening among Nigerian youth, the nation's largest yet most apathetic voting bloc. That could have profound consequences in the coming years.

The foundations of the modern Nigerian state were laid by baby boomer military officers. Born between WWII and Nigeria's independence in 1960, they took over after the first military coup in 1966 and were heavily influenced by the 1967–70 civil war, which etched ethno-regional distrust and a fear of ethnic conflict into their political consciousness. Those fears have largely shaped Nigerian politics ever since, creating governance arrangements designed to minimize ethnic conflict rather than promote efficiency or economic development. These include an unwritten political agreement to rotate the presidency between Nigeria's north and south, constitutional principles that prioritize ethno-regional balance over technocratic competence in the civil service, and a highly centralized government that has left little space for sub-national decision-making.

Nigeria's Generation X (those born between 1960 and early 1980s) cut their political teeth during the 1989 riots against structural adjustment programs imposed by the military regime on advice of the IMF and World Bank. Their activism grew over the years of military rule, ultimately forcing a transition to democracy in 1999. But the baby boomers managed to hold on to the reins of power, drawing on vast patronage networks built during their years of military rule. All of Nigeria's presidents since 1999 have been former military officials from the baby boomer generation or figures chosen by them. Generation X has largely been unable to change the existing governance structure.

Those born since the 1980s, Generation Y, had up until recently paid little attention to politics, despite comprising over 70% of the population. Polling data (admittedly sparse) suggest that those under 35 were much less likely to vote in previous elections than members of older generations. That reality is now likely to change as young protesters grow more conscious of their political power. The protests have already led to the disbanding of SARS, as well as promises from the federal government to investigate and prosecute officers for criminal conduct. State governors, who have limited control over the federal police, have joined calls for reform, and some have already begun prosecuting officers accused of wrongdoing. In response to the protests, the Speaker of the House of Representatives promised not to support a spending plan that does not include compensation for the victims of police brutality.

With baby boomers well past retirement age, President Muhammadu Buhari is likely to be the last leader from the era of military-led governments to occupy the country's highest office, helping to pave the way for substantial governance change. The shift should be supported by two other positive trends playing out in Nigerian politics: increased competition (an incumbent president lost an election for the first time in 2015) and rapid urbanization (according to UN data, Nigeria became majority urban in 2018). Nigerian politicians have historically taken their cues from rural dwellers, who are typically more concerned with access to food, water, and other basic needs. By contrast, urban voters, who generally benefit from higher levels of education and infrastructure, tend to care more about public services, economic opportunity, and social justice. As their share of the electorate expands, they will increasingly hold government accountable for delivering on these issues.

In this context, the protests present an opportunity for Generation Y to begin to define the contours of its political consciousness, which will likely focus on social and economic justice. Organizers have already begun efforts to increase political participation among youths, encouraging protesters to register to vote and advocate for specific issues. These developments will put police and criminal justice reform squarely within the public debate ahead of the 2023 elections, for which campaigning will begin in a little over a year. Moreover, the focus on police brutality has raised awareness of one of the biggest weaknesses of the Nigerian state: a lack of tax revenue that hobbles public services. Protesters recognize the police suffer from inadequate compensation, poor training, and limited resources. Over time, recognition of these problems will strengthen the political appetite for improving tax administration and enforcement, allowing the state to provide more public goods and raise living standards. Generation Y can help make that happen.