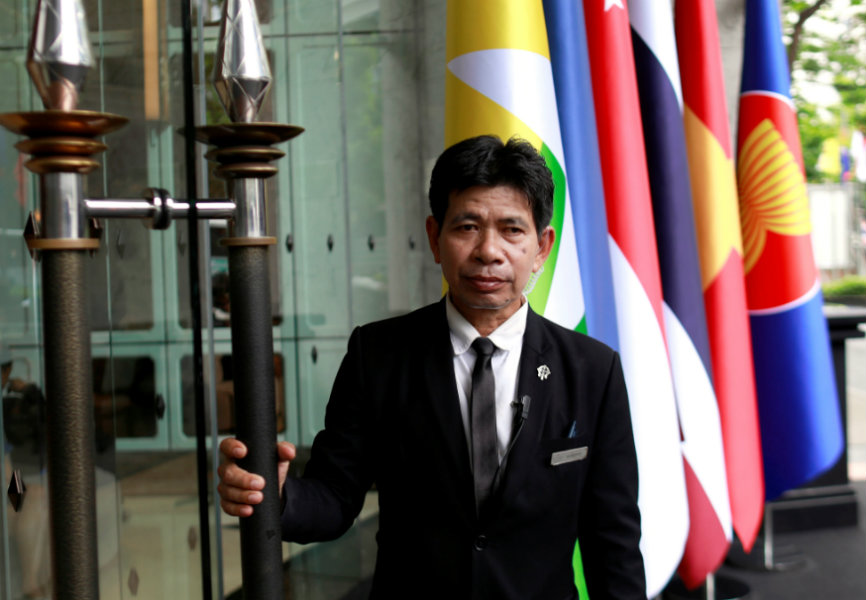 A security officer stands in front of Southeast Asian flags at the 34th ASEAN Summit in Bangkok. REUTERS.
The leaders of the 10 members of ASEAN will meet this week in Bangkok at a time of a heightened tensions between the US and China over trade, tech, and other issues. Eurasia Group expert Peter Mumford explains some of the issues Southeast Asian nations are trying to navigate as they gird for an era of heightened strategic competition between the two global powers.

One of the bloc's guiding principles is to position itself as the center of political relations and economic integration in Asia Pacific—"ASEAN centrality.” However, strategic relations are in flux as the US pushes its “free and open Indo-Pacific” strategy—supported by Australia, India, and Japan—which is broadly aimed at containing Beijing's expansion through its flagship Belt and Road Initiative (BRI).

ASEAN leaders will debate at this week's summit how to ensure the vague concept of “ASEAN centrality” is maintained in an era of heightened US-China tensions and strategic competition. Agreement on how best to position ASEAN in the evolving regional architecture in Asia is made more complicated by the diverse views on the US-China dynamic among Southeast Asian countries, which also affects how the bloc approaches the BRI, South China Sea, and US-China trade and tech tensions.

Most countries in the region support the BRI, largely because they are desperate for infrastructure funding, and offers of financing from China help fill needs and create competitive pressure on other lenders/investors, including Japan, to offer more attractive terms. Beijing's flagship initiative has hit several road bumps, however, with Southeast Asian countries under domestic political pressure not to be seen as caving to China's demands.

Prime Minister Mahathir Mohamad's shock election victory in Malaysia last year on a platform that included renegotiating Chinese-backed (and other) projects was a pivotal moment for the BRI. China will now be concerned that other countries try to copy Mahathir's success in using hardline negotiating tactics with Beijing to cut project costs.

The differences in approaches among Southeast Asian countries to China have been most apparent on sensitive sovereignty issues such as those related to the South China Sea, so progress toward a Code of Conduct for the disputed area has been slow. Little progress is expected at the upcoming summit, and if the code is ever finalized, it is unlikely to be legally binding.

US-China trade tensions create significant headwinds to economic growth in ASEAN—China is ASEAN's largest trading partner; the US its third biggest. The effect will be most keenly felt in export-dependent economies such as Singapore, Malaysia, Thailand, and Vietnam. But for some there could be a silver lining as the tensions lead firms to accelerate plans to shift supply chains out of China. Thailand, Malaysia, Indonesia, and the Philippines all hope to benefit, though Vietnam could be the biggest winner. Despite some capacity constraints, Vietnam boasts low-cost labor, political stability, and a broadly pro-FDI and pro-trade environment—including membership in the Comprehensive and Progressive Agreement for Trans-Pacific Partnership and an upcoming EU free trade agreement.

Though there is much talk about the need to deepen regional economic integration to help weather the shock of US-China tensions, little progress will be made at the upcoming summit on the ASEAN Economic Community agenda. The Regional Comprehensive Economic Partnership (RCEP) will be another key area of focus; the mega-trade pact would help place the Southeast Asian bloc at the heart of Asia. Still, no major breakthroughs are likely on RCEP at the upcoming summit. India's reluctance to cut tariffs further remains one of the key barriers.

ASEAN is also at the heart of the US-China competition in the technology sphere, which includes a US campaign to sideline China's Huawei. China-wary Vietnam is the only country where Huawei is struggling to make headway on 5G. More neutral Southeast Asian countries, such as Indonesia and Singapore, have avoided taking an official public stance either in favor or against the Chinese telecom giant. On the other end of the spectrum, pro-China countries such as Cambodia are working closely with Huawei in 5G infrastructure.

The Huawei issue notwithstanding, the broader trend is one of rising Chinese tech investment in Southeast Asia, which is shaping the regulatory environment and competitive landscape. ASEAN countries are working on a digital integration action plan, but this will likely not be unveiled before the end of the year and will attempt to avoid taking sides in the US-China technology competition.
SUBSCRIBE TO SIGNAL
LOUD WORLD. CLEAR SIGNAL. Signal is a newsletter on international affairs published five times a week by GZERO Media, a Eurasia Group company.