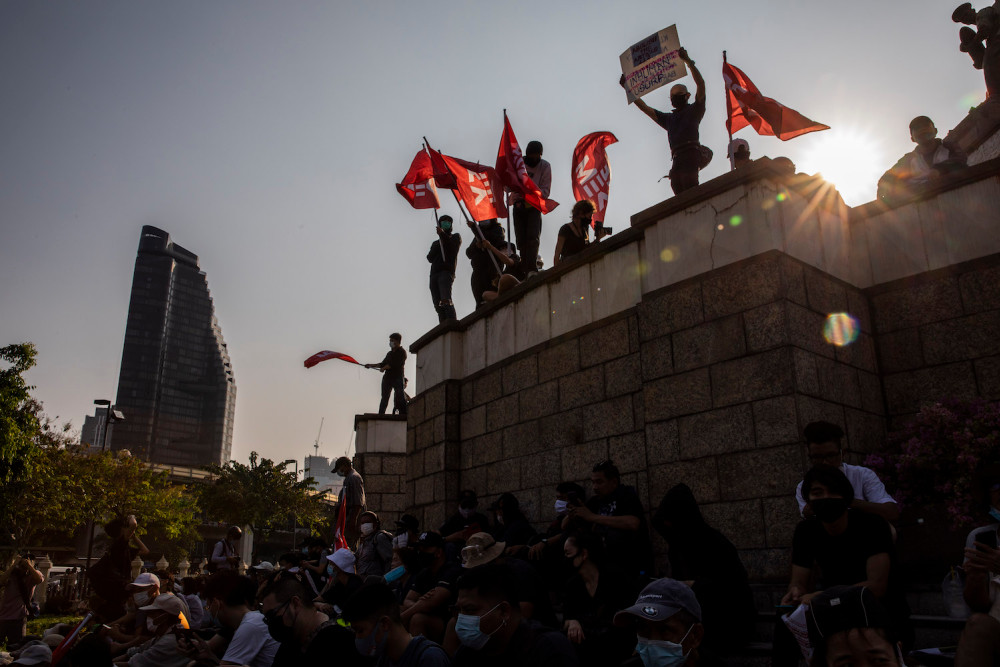 Thai pro-democracy protesters wave flags during a rally in Bangkok on Feb. 28. LAUREN DECICCA/GETTY IMAGES
Southeast Asia is now ground zero in the U.S.-China competition that many commentators and policymakers consider Beijing to be winning. Much has been made of U.S. President Joe Biden's need to refocus American attention on the region. Less discussed are the difficulties of deepening engagement with less-than-liberal allies and partners there, such as Thailand and Vietnam, without neglecting democracy and human rights. The Feb. 1 military coup in Myanmar poses a whole other set of challenges.

When they are mentioned, these two goals—engagement and the promotion of liberal values—are juxtaposed as if the United States must choose between them. But this is a false choice. The Biden administration can pursue a values-based strategy in Southeast Asia while increasing economic and security engagement by promoting good governance and anti-corruption measures and coordinating on liberal-minded projects with other regional partners. This agenda would allow the United States to provide Southeast Asian countries with an offramp from dependence on China, while also serving U.S. national interests.

Bad governance and widespread corruption undermine human rights throughout Southeast Asia. Last year, Transparency International reported that three-quarters of citizens in 17 Asian countries saw corruption as a major problem. More than half of the publics in Cambodia, Malaysia, and Vietnam said their governments were doing badly in the fight against it. Yet Transparency International also found that nearly two in three people in Southeast Asia say they could make a difference in the fight against corruption, by reporting it, by refusing to pay bribes, and by other means. While many people in the region do not see their governments as legitimate or even responsible, some may trust the United States—presenting an opportunity for Washington.

Combating corruption, which slows development and marginalizes those on society's fringes, is key to promoting democracy. Recently, Malaysia's notorious 1MDB scandal clearly demonstrated how corruption takes place not only through small bribes but also within the halls of power, even in democracies. Anti-corruption initiatives in Southeast Asia could ensure that policymakers are making decisions for the right reasons—that they are not, for example, accepting nontransparent Chinese Belt and Road Initiative financing, which has received local backlash, only to enrich themselves.

The United States should seize on this opening to help establish local, independent, and transparent institutions that help countries navigate anti-corruption initiatives. To succeed, these efforts must have public and government buy-in. The first should be fairly easy to secure, given the widespread frustration with corruption. Moreover, a recent survey of elites in Southeast Asia—including leaders in government, civil society, and business—found that if forced to align themselves in the U.S.-China rivalry, 62 percent of elites in Southeast Asia would go with the United States. Likewise, while national governments in the region do not have uniformly positive views of the United States, those who prefer Washington to Beijing would likely be willing to take part in U.S.-championed anti-corruption activities—in part to increase their legitimacy at home.

To receive a return on its investment in the region, the United States should push international investors and donors to focus on transparent and accountable projects. Too much money has disappeared in the region over the years, pocketed by kleptocrats from Phnom Penh to Naypyidaw. Foreign funding should go only to projects that have clear regulatory frameworks, dispute-resolution procedures, and data transparency—fronts on which Chinese investment, and particularly the Belt and Road Initiative, often fails. With the possible exceptions of Cambodia, Laos, and post-coup Myanmar, even illiberal governments may be interested in countering corruption, if only to boost their domestic popularity. U.S. assistance to fight corruption would improve lives in Southeast Asia by helping governments to capture lost money and invest it in public projects. Such assistance would provide a public relations coup for Washington at Beijing's expense.

The United States must engage with the world as it is, not how it wishes it to be. Policymakers can't refuse to work with Cambodia or Laos on the basis of their autocratic governance or human rights abuses. Likewise, in offering its assistance, the United States should focus not on regime change but on reforming local-level governments, which are often more corrupt or abusive. U.S. initiatives will have more success if they are aimed beyond Southeast Asia's capital cities. A more local approach could, for example, push Vietnam's local governments in the Central Highlands to end the repression of ethnic minorities there. If Washington makes clear that more aid and cooperation hinge on limited reforms, Hanoi might prod local officials to let up. Small victories may not make countries into full democracies, but in aggregate they amount to real change.

The United States must engage with the world as it is, not how it wishes it to be.
Washington will need nearby partners in its efforts in Southeast Asia. The Biden administration should reexamine the role that other countries such as Australia, Japan, Mongolia, South Korea, and Taiwan can play in promoting liberal values. Hosting civil society summits in capitals such as Tokyo or Seoul would go a long way in reinforcing the wave of pro-democracy activism stretching from Hong Kong to Thailand to Myanmar. While Japan has continued to provide support to some regimes despite democratic backsliding, other developments are encouraging: Its government is currently considering its own version of the Magnitsky Act, which is used in the United States to punish human rights offenders, and Taiwan is following suit. South Korea, meanwhile, has said that it looks forward to working with the Biden on “democratic expansion.” Southeast Asia is as good a place as any to start.

Once the world has overcome the coronavirus pandemic, Southeast Asia will be ripe for U.S. engagement: China's aggressive pandemic diplomacy has undermined its standing in the region. Biden's proposed Democracy Summit—a diplomatic gathering of the world's democracies—would be a good opportunity for the administration to roll out reform-focused steps, preferably in coordination with democratic Asian partners. While the United States won't invite undemocratic governments, such as those of Cambodia, Laos, and Singapore, it could invite members of their civil societies—sending the message that the administration is engaging the region on more values-based terms, and that it has not forgotten about Southeast Asia.