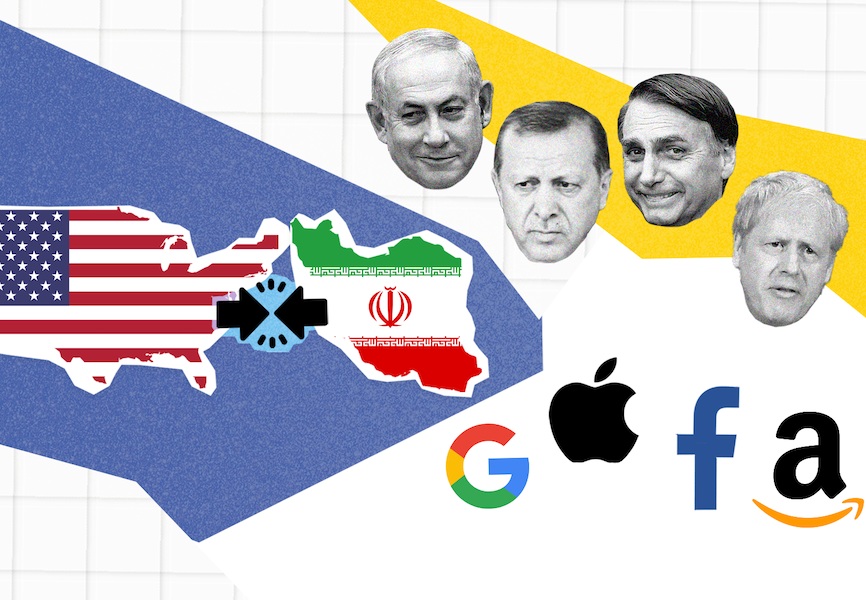 Trump's friends in trouble
You might expect that Trump's fellow travelers among world leaders—a group comprising Erdogan, Brazil's Jair Bolsonaro, the UK's Boris Johnson, Israel's Binyamin Netanyahu, and others that we labeled the “Coalition of the Unwilling” in Top Risks for 2019—will be sidelined as Biden moves into the White House. Or that these leaders might try to thwart Biden foreign-policy plans. It's true that Johnson won't get his US trade deal any time soon, Netanyahu won't see the new US president moving mountains for him as Trump has, and that Erdogan and Mohammad bin Salman will lose their protectors within a Washington establishment eager to call them to account for various transgressions.

But to view these leaders as doomed to four years of pain from Washington underestimates both the Biden administration's willingness to engage their governments on matters of shared interest and the capacity of these leaders to adjust to new realities.

Johnson booted Brexit hardliner Dominic Cummings from 10 Downing Street soon after the US election and then pivoted aggressively to a green agenda that will be further boosted by the UK's hosting of the UN climate conference in 2021.

The incoming Biden administration will be willing to engage on matters of shared interest.

These are bridges toward common ground with Biden's White House. Erdogan intends to pursue a reset of US-Turkey relations and made subtle moves late last year to clear the way for this strategy. Netanyahu has made a point of highlighting Biden's pro-Israel record and his personal history with the president-elect (plus, there's a good chance he doesn't last long). Mohammad bin Salman will be ready to appease a Saudi-skeptic White House, possibly with a deal with Qatar to end the Gulf Cooperation Council embargo, further steps toward normalization of relations with Israel, and clean energy cooperation with the US. Bolsonaro will bristle at US pressure on climate issues, but he can still find common cause with Biden on China and Venezuela.

While these leaders enjoyed a personal affinity with Trump that they won't share with Biden, they weren't counting on another Trump term, and Biden's White House will look past personalities toward foreign-policy pragmatism. Not all attempts to curry favor will be successful—we have particular doubts on Turkey, as described in Top Risk #7—but a coordinated axis of troublemakers with shared grievances is one thing Trump won't be leaving behind.

Techlash in the USSilicon Valley companies and their shareholders have profited handsomely from an accumulation of market power and political influence in the last decade. And as the coronavirus hit with full force last year, the shares of the world's biggest internet companies strongly outperformed, with lockdowns forcing millions of people to work, learn, entertain themselves, and shop from home, while gutting the brick-and-mortar economy. Today, shares of the world's biggest tech platforms—worth about $6 trillion (twice the GDP of France)—trade at an eye-popping 35 times future earnings. And that is to say nothing of the increasingly critical role these platforms play in the political process.

All of this makes them enormous targets, and some expect 2021 to be the year that the global backlash against US big tech—the techlash—really bites.

Instead, big tech will be saved by the political complexities of the problems it poses. Europe wants to impose new fees on US tech champions, but the US government will fight to defend these firms and the tax base they represent. Within US borders, there is plenty of animosity toward tech companies, but complaints differ across the political spectrum. Republicans are upset over an alleged anti-conservative bias in tech firms' efforts to police content, while Democrats complain about their monopoly power and lack of content regulation. Meanwhile, both parties fear the rising prominence of China's own tech champions, and neither has a clear sense of whether backing US alternatives means abandoning their own regulatory impulses.

Big tech will be saved by the political complexities of the problems it poses.

And with tech serving as an engine of post-Covid recovery, lawmakers will think twice about strangling the golden goose, even if they could agree on how it should be done. US big tech will have plenty of challenges to navigate this year (see Top Risks #5 and #6), but a “meet your maker” moment will not materialize. On balance, US big tech is positioned to reach the end of 2021 in a stronger position than at the beginning.

Iran-US confrontationTies between the two countries will be neither as productive nor as dangerous as many observers expect. Rather than war or peace, US-Iran relations will muddle through.

Bilateral diplomacy between the two governments won't be straightforward. During his election campaign, Biden pledged to return to the 2015 nuclear agreement as a platform for broader negotiations to “strengthen and lengthen” the deal and address Iran's regional meddling, human rights violations, and missile program. For its part, Iran is eager for sanctions relief but has little interest in these broader conversations.

Absent a clear dash to a bomb, the risk of war is low.

Both sides will be wary about moving quickly. For Biden, re-entering the nuclear agreement is legally easy but politically costly. Given the need to battle the pandemic and restart the economy, foreign affairs will take a backseat early in the administration. Biden has to pick his battles—and Iran is a political loser. The challenge is greater in Tehran. While President Hassan Rouhani wants a deal immediately, he is politically weak and at the end of his final term. Supreme Leader Ali Khamenei is wary that the US may be setting a trap that would require negotiations on Iran's regional or missile policy—a red line for his regime. US-Iran talks could start early, and the two sides may reach some kind of interim agreement to lower tensions. But Tehran will probably wait until after both the June presidential election and the new president's inauguration in August to consider seriously returning to the nuclear deal.

There is also growing concern that Iran's nuclear advancements could trigger conflict. Israel was blamed for an explosion at a sensitive nuclear site in July and the assassination of a top nuclear scientist in November. Iran has pledged to retaliate for both. Meanwhile, Iran has ramped up its nuclear program, announcing it intends to enrich to levels close to weapons grade. The country has already started moving more key nuclear infrastructure underground, making it harder to attack. As Iran advances and Biden considers negotiating, Israel will escalate its rhetoric about the danger posed by Iran. But don't expect a blowup. Israel is aggressive in covert operations; that's not the same as being willing to start a war. Biden will hold back Israel by using the Obama playbook—a mixture of assistance and security cooperation. Absent a clear dash to a bomb, the risk of war is low.