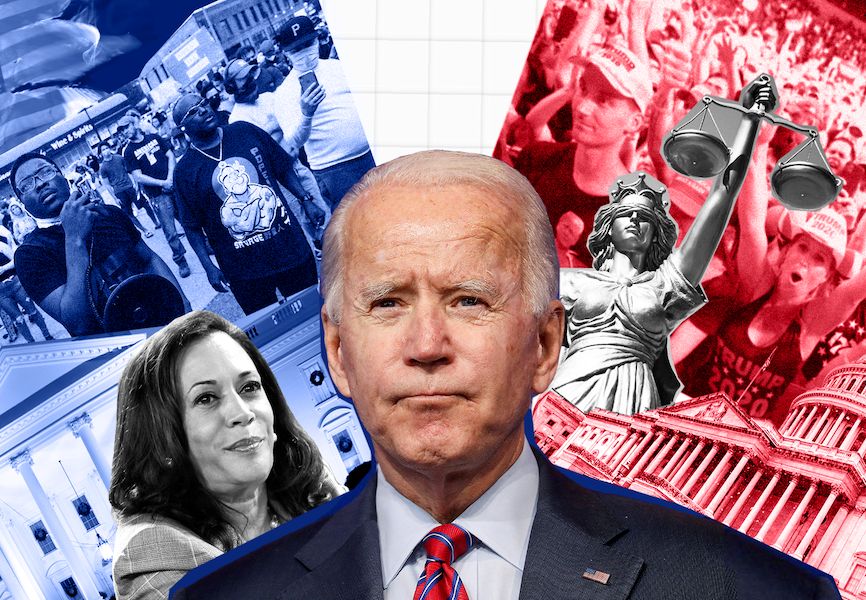 Biden won the 2020 presidential election. On 20 January he will be inaugurated as the 46th president of the US. He received 306 electoral votes and more than 80 million popular votes, the most of any presidential candidate in American history. But President Donald Trump's refusal to accept the outcome of an election he declares was stolen is unique in American history, underscoring how divided the country has become—and will remain.

Trump himself won the second-largest number of popular votes in American history (74 million), and Republicans won enough votes down ballot to make inroads in the House of Representatives as well as critical gains in statehouses and legislatures. Add Trump's success in creating a decisively conservative Supreme Court, most recently with Justice Amy Coney Barrett replacing the late Ruth Bader Ginsburg, and Biden will emerge with the weakest mandate since Jimmy Carter in 1976. Few observers believe he will run for reelection in 2024.

A challenge for Democrats—increasingly a coalition of college-educated urbanites—is that Trump's popularity extends well beyond his most vocal supporters. He received 11 million more votes than he did in 2016 and, in so doing, constructed a broader electoral coalition that includes more Hispanics and Black Americans. A significant segment of that coalition sees Trump's refusal to concede as a display of courage, not an assault on democratic norms. While many Republican Party elders don't like Trump, public opinion is the reserve currency of politics, and he will leave office as (by far) the most popular and influential figure in the GOP. The last-minute push by members of Congress to delay or derail the election certification serves as a foreboding sign of what's to come. As long as a significant portion of Trump's voters remains loyal, he will cast a long shadow, compelling Republican leaders to support him to avoid alienating his backers. For them, Biden will be #NotMyPresident and considered illegitimate.

Facing an aggrieved opposition loyal to the Trump brand, Biden will find it more difficult to govern than under the “normal” conditions of split government. There will be neither a badly needed large stimulus package nor long necessary changes to the US healthcare system. Progressive priorities like a higher national minimum wage, a new voting rights act, and filibuster reform are non-starters. Markets typically welcome divided government, because it creates hurdles to tax increases and new regulations, but gridlock will be worse than in the past as Republicans block Biden's judicial appointments and challenge left-of-center executive branch appointments, hampering agencies that have critical functions.
The new occupant of the Oval Office will be seen as illegitimate by roughly half the country.
Biden's supporters will criticize congressional inaction caused by an obstinate Trumpist coalition and encourage the president to take unilateral executive actions of questionable legality. Biden's detractors will accuse him of overriding the opposition and exercising excessive power when he governs by executive order. In truth, rule by partisan decree has become the norm under former president Barack Obama and then Trump, and major challenges—among them enacting entitlement reforms, increasing access to health insurance, reducing income inequality, and simplifying the tax code—will only grow harder to tackle as time passes. The more polarized the country becomes, the less likely its eroding democratic institutions will enable the compromises necessary to resolve fundamental problems.

If the vaccine rollout proceeds as hoped, the pandemic subsides, and the economy rebounds strongly from the recession, Biden may win some political capital with Republicans, but there are massive challenges ahead for the most ambitious vaccination campaign in US history (see Top Risk #2). If it flops, and the country's health and economic emergency extends deep into 2021, Republican opposition will intensify and grow more rigid.

The major risks of 46* are domestic, but the consequences of no-holds-barred party warfare extend beyond America's borders. Aside from the shared desire of Republicans and Democrats to punish China (their complicity notwithstanding) for decades of technological and economic advancement at the expense of America's intellectual property and manufacturing workforce, they disagree sharply—with each other and among themselves—over the objectives of US foreign policy. Washington's mismanagement of the pandemic, meanwhile, is compelling its friends to ask why they should entrust it with the far bigger task of revitalizing the global order. Biden will try to reassert American leadership in global affairs, but polarization and an inability to manage crises at home means the US won't inspire as much new confidence as Biden hopes. Europe decided preemptively to buck Biden's goals by agreeing to a comprehensive agreement on investment with China.

In addition, the size of Trump's base and the demographic broadening of his political coalition will force allies to reckon with the possibility of another “America First” president taking office four years from now and overturning commitments made by the Biden administration. That's why Biden, a man with decades of experience in the Senate, must try to secure the kind of bipartisan buy-in on foreign policy that Obama, his Democratic predecessor and former boss, could not. 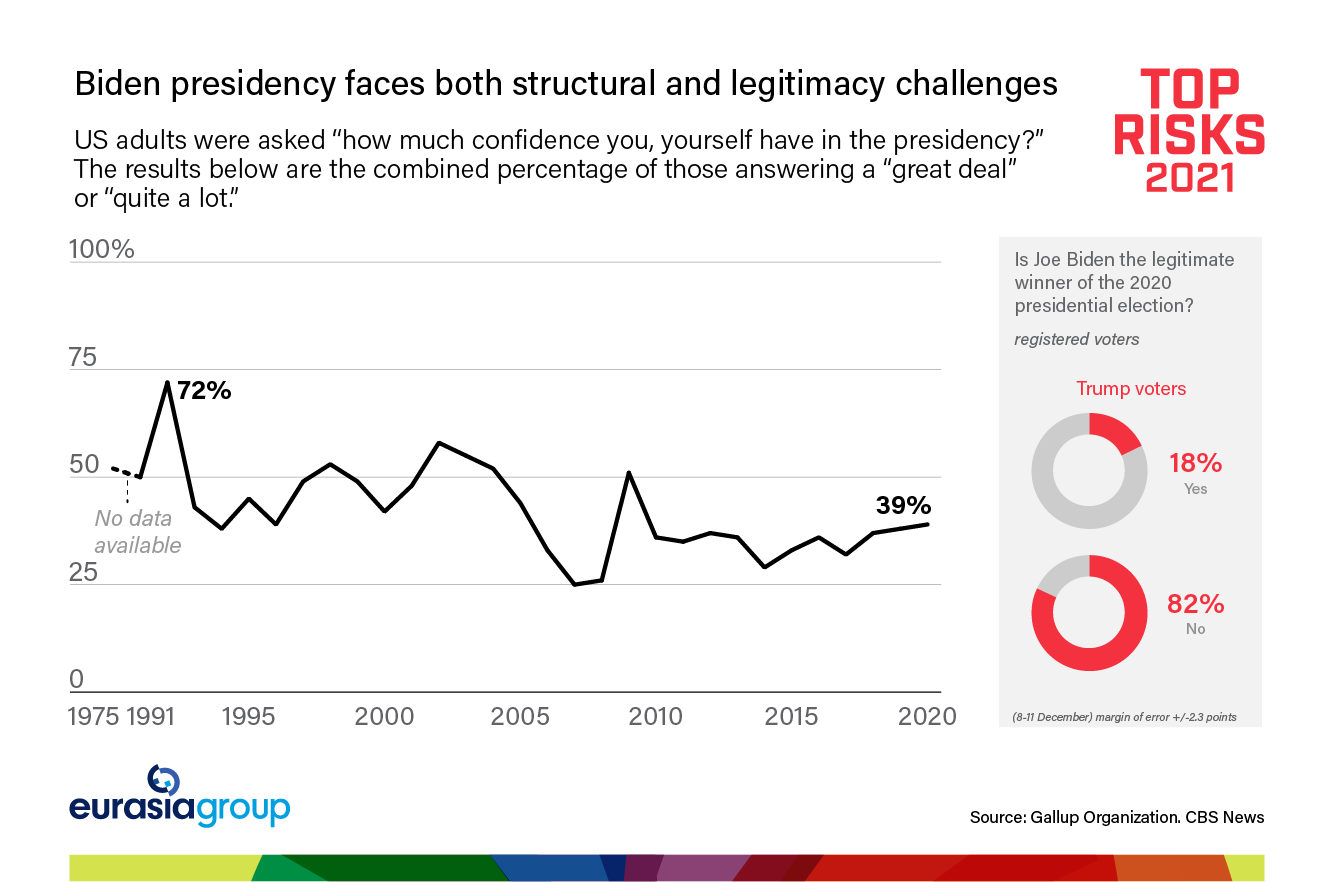 Calcified political polarization and declining global alignment make for a sobering basecase. Both phenomena will be more pronounced, though, if the office of the presidency is permanently delegitimized. It's not just Trump and his top surrogates, after all, who claim 2020's contest was rigged: 70% of Republicans polled afterward said the election was not “free and fair.” An opposition that believes Biden stole the election will be far more aggressively rejectionist than one that merely wishes Trump had prevailed.

In short, following a Trump presidency that many Democrats believe Russian agents won for him, Biden's term opens the era of the asterisk presidency, a time when the occupant of the Oval Office is seen as illegitimate by roughly half the country … and by the lawmakers these election skeptics send to Congress. Such a political reality has never occurred in another G7 country, but it's the reality of the world's most powerful democracy today.