The Saudi kingdom will face growing and destabilizing discord within the royal family this year, and will be increasingly isolated internationally. This will lead Saudi rulers to act more aggressively in their near-abroad and will further heighten instability in the Middle East.

The threat of intra-royal family strife is on the rise. A scenario of open conflict, unimaginable prior to King Salman's January 2015 ascension, has now become realistic. The core problem is that Salman has moved boldly to empower his 30-year old son, Mohammed bin Salman, almost certainly in preparation to make him heir apparent, fueling frustration among competitors within the royal family. This rivalry is unlikely to lead to near-term Saudi collapse, but the credibility of this scenario—and the general trend of growing instability—in a nation critical to the global economy make it a top risk.

Salman's radical reshaping of power within the family is happening in a Saudi Arabia grappling with $40 oil, negative demographics, and an undiversified economy. The era of power-sharing among a small number of brothers has been replaced with one in which a shrinking pie is divvied up among hundreds of cousins. The risk is that a group of princes could strike back by attempting to oust bin Salman from his position as deputy crown prince, or by publicly opposing the king. Political instability in a country that produces roughly 10.5% of global oil production would pose significant risk to every market participant.

Meanwhile, Saudi Arabia is more geopolitically isolated than at any other point in the last several decades. The announcement of a Sunni “Islamic military alliance” is mostly window dressing. Members of this diverse group don't have the political will or mutual trust to develop a military arm to confront the Islamic State, and several of them, including Pakistan, apparently didn't know they'd joined when the alliance was first announced. That aside, even the most deafening declaration of political collaboration can't obscure the fact that Saudi Arabia is losing influence over its historic Sunni allies.

Riyadh's Egyptian and Pakistani partners dodged requests to support the kingdom's military intervention in Yemen. Key Gulf Cooperation Council states (and ostensible Saudi allies) are hedging their positions in relation to an ever more influential Iran. OPEC is in shambles. Egypt has backed Moscow's pro-Assad intervention in Syria, directly opposing the kingdom. Turkey hews to a position closer to Riyadh's, but is also an increasingly infuriating competitor for leadership of the Sunni world. The Iran deal and US response to the Arab Spring leave Saudi leaders questioning the depth of America's commitment to their security.

The key source of Saudi anxiety is Iran. Iran's supreme leader, Ayatollah Ali Khamenei, views escalating tensions against the Saudi kingdom as a particularly useful way to whip up political support at home. The threat will intensify because, soon to be free of sanctions, Iran's economy will strengthen, and its government will have more money to spend in support of regional clients. And unlike Saudi Arabia's, Tehran's alliances are consolidating: Iraq is drawing closer, and it is likely Assad will be around a good while longer.

A more isolated Saudi Arabia will double down on protecting its interests, and will be sorely tempted to act upon the saying that offense is the best defense in 2016. Riyadh will continue to support anti-Assad rebels in Syria, and ramp up that aid, despite the opposition's inability to effectively challenge the Syrian president. Even a shooting war with Iran is possible in extremis; the kingdom will push back wherever it views Tehran to be gaining an advantage. More generally, expect an isolated and domestically weaker kingdom to lash out in new ways.

Risk 6: The rise of technologists 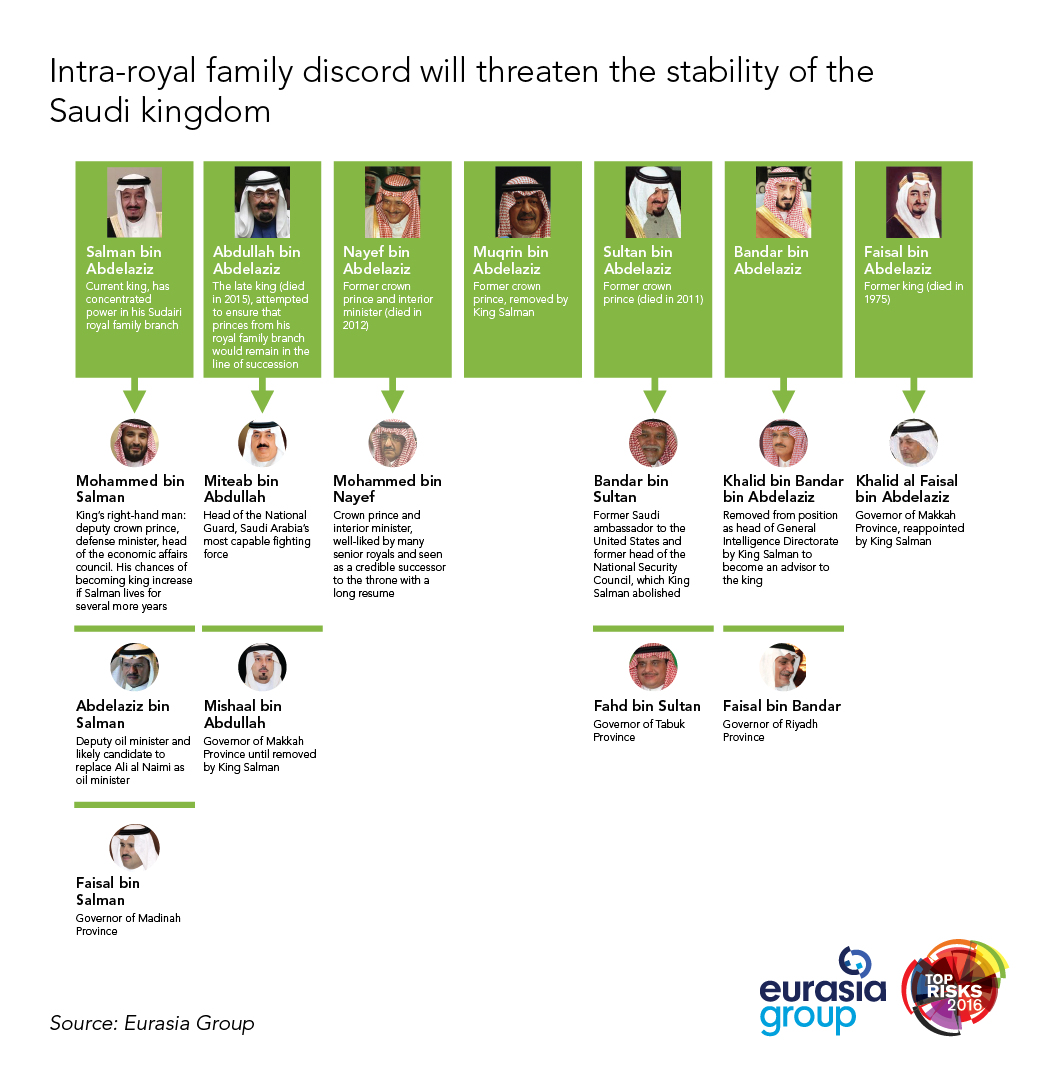