Eurasia Group | Democrats face dilemma on trade ahead of 2020

Democrats face dilemma on trade ahead of 2020 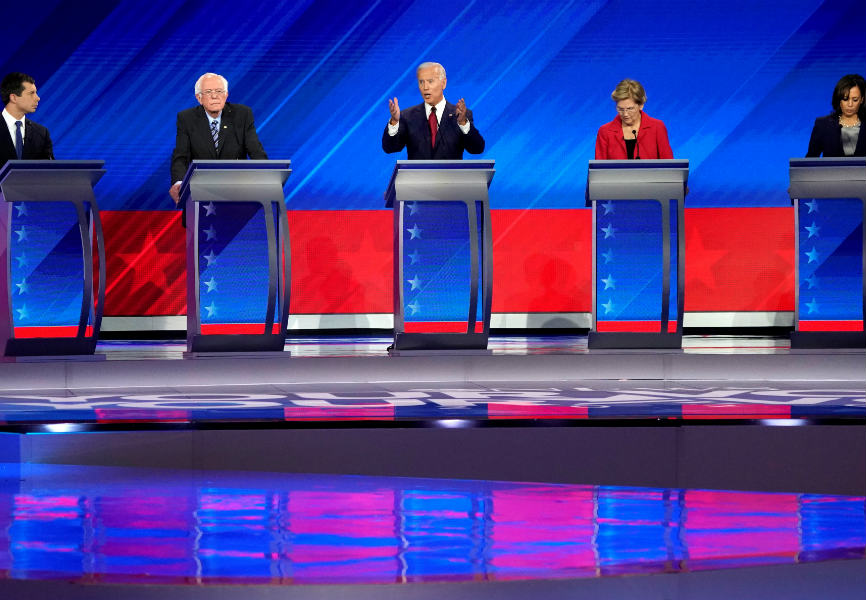 (From left) South Bend Mayor Pete Buttigieg, Senator Bernie Sanders, former Vice President Joe Biden, Senator Elizabeth Warren, and Senator Kamala Harris at the 2020 Democratic US presidential debate in Houston on 12 September 2019. REUTERS.
Democratic presidential candidates will have a new opportunity to make their arguments on trade—one of President Donald Trump's signature policy issues—when they take to the debate stage on Tuesday, 15 October. The issue gained more prominence at the last debate, on 12 September, when the candidates struggled to differentiate themselves from the man they hope to beat at the polls next November. Eurasia Group experts Jeffrey Wright and Caitlin Dean explain what you need to know about the Democrats and trade.

Democrats have long been skeptical of free trade

Trump broke the mold of a Republican presidential candidate in 2016 when he sharply criticized past free trade deals and promised a tougher stance toward countries doing business with the US. In so doing, he moved closer to Democratic Party orthodoxy. That is particularly true on China, where many of the issues Trump has highlighted—currency manipulation, intellectual property theft, creation of overcapacity through subsidies—have been staples of mainstream Democratic politics since at least the first Bush administration. Democrats often argue that Trump is right on the merits but wrong on the tactics.

The Democrats' temporary conversion to a pro-trade party in the 1990s and 2000s was always shallow, dependent on two presidents—Bill Clinton and Barack Obama—who pursued pro-trade policies atop a much more skeptical party. Despite being carried over the finish line by Bill Clinton, the ideas behind the North American Free Trade Agreement (NAFTA) came out of the George H.W. Bush administration, and nearly half of House Democrats voted against ratifying it in 1994. Only 15 Democrats voted for the Central America Free Trade Agreement (CAFTA) in 2005; and by the 2016 presidential primary, Hillary Clinton's support for the Trans-Pacific Partnership (TPP) had become such a political millstone that she disavowed the pact.

In a July survey by the Pew Research Center, 65% of voters—including 59% of Republicans and 73% of Democrats—said that free trade agreements have been a good thing for the US; 56% said Trump's tariffs are bad for the US, including 82% of Democrats. Superficially, that would suggest that support for free trade is stronger than the popular narrative suggests, and that Democrats could profit politically from defending it.

That conclusion is not so simple, however. First, most Democrats' moves toward free trade in the Trump era are likely attributable to negative partisanship—when Democrats know that Trump supports something, they tend to oppose it. Second, most Democrats care very little about trade, ranking it far below issues such as healthcare and climate change; but those that do care tend to be intensely anti-trade.

By and large, Democratic presidential candidates are comfortable attacking Trump for his tariffs' impact on the US economy, and comfortable deriding the administration for not recruiting allies to its campaign to change Beijing's economic behavior. The contenders are noticeably less specific about what policies they would pursue as president, and which parts of Trump's trade agenda they might keep or discard.

Both Senators Bernie Sanders and Elizabeth Warren are long-time free trade skeptics with robust plans for how they would overhaul the US's trade architecture. Sanders has voted against NAFTA, CAFTA, and most other free trade measures during his time in Congress, and he and Warren were both vocal opponents of the TPP. Both have proposals to give workers and environmental advocates more input into the negotiation of free trade agreements; Warren's conditions for pursuing an FTA would exclude all but the most developed markets (including, for now, the US, given its withdrawal from the Paris Agreement). Both have praised Trump for taking on China even as they criticize his unpredictable tactics, and both have said they would likewise consider using tariffs as leverage.

This group is led by former Vice President Joe Biden but also includes Beto O'Rourke and Julian Castro. All three have records of support for free trade measures, though Biden's is the longest and most vivid given his 40 years in national politics and tenure as vice president. Biden supported NAFTA and the TPP, but in a nod to the party's protectionist drift, he has said, "There's no going back to business as usual” on trade. Still, this group is more likely to back new trade deals, more likely to try to return the US to the TPP, and less likely to use tariffs as a tool of trade policy than their progressive rivals.

Both Senator Kamala Harris and South Bend Mayor Pete Buttigieg remain largely uncommitted on trade issues. Running for Senate in 2016, Harris initially declined to take a firm position on the TPP but then came out against it after challenges from the left. She has maintained that approach in the Senate and on the campaign trail, criticizing Trump's tariffs while acknowledging the challenge presented by Beijing's economic model. Similarly, Buttigieg has called Trump's tariffs “a fool's errand” and criticized the administration for not working more closely with allies, but he declined to be specific about how he would approach China as president. In office, their respective approaches would likely be more in line with the moderates than the progressives, though Harris and Buttigieg will likely use their lack of a defined record on trade to their advantage, trying to appeal to both sides of the debate without alienating either.

To learn more, look at Politics in Pictures: a visual guide to the Democratic challenge and Risk 2: US-China in our Top Risks 2019 report.