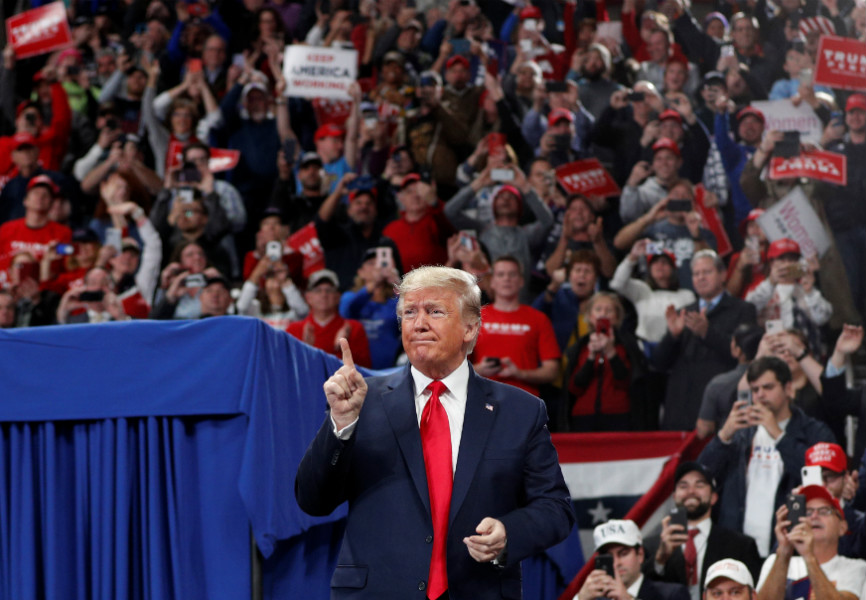 US President Donald Trump at a rally in Hershey, PA. REUTERS.
(This is the first in a series of year-end analyses of the main countries and regions covered by Eurasia Group. Read our pieces on China, Europe, and the Middle East and North Africa for additional coverage.)

Hardening divisions in the US electorate have raised the stakes for next November's presidential election, while mounting unrest in Latin America has been putting more pressure on leaders already struggling to overhaul ailing economies. Eurasia Group experts Todd Mariano, Daniel Kerner, Ana Abad, and Silvio Cascione explain how this year's trends will shape the outlook for 2020.

After a tumultuous year in US politics, what are the main factors that will determine the outcome of next November's election?

Elections in which a president is running for a second term are largely decided by voters' views on his or her tenure in office rather than their perceptions of the challengers. For President Donald Trump, this “referendum” will test which is stronger: the durability of his approval ratings or the turnout motivated by his disapproval ratings. There is ample data showing that both are likely to be historically remarkable in the case of Trump.

Approval ratings in the six months preceding an election are better predictors of outcomes. It appears that the Democratic primary will be a long slog, which could also benefit Trump. But the ability of a candidate to break out of the pack, thereby shortening the primary, will rise once primary voting starts on 3 February. Former Vice President Joe Biden is best positioned to consolidate his lead this way.

The state of the economy is another important factor to consider. Any incumbent seeking to remain in office needs a strong economy, but this is especially true for Trump given his high negatives and the critical battle for economically conservative voters. As of now—especially as the Democrats have not settled on a nominee to challenge him—Trump's strong base, the economy, and the built-in advantages of incumbency make him a slight favorite to win. But his slight advantage is certainly not impregnable, and in the 13 swing states where the election will probably be decided, margins could be tight.

How will the unrest that has broken out across Latin America in recent months shape the region's politics in 2020?

The region is looking increasingly unstable. Protests in a number of countries—notably in Chile, Colombia, and Ecuador—dominated politics in the last quarter of the year. The unrest reflects middle-class frustrations with living standards (especially in Chile and Colombia) as well as the pain of spending cuts (in Ecuador) that are making it more difficult for leaders to govern. The root causes of the malaise largely stem from the political, social, and economic effects of the abrupt end of the commodity supercycle. For over a decade beginning in the early 2000s, strong global demand for many of the commodities the region produced buoyed local economies and allowed governments to expand social spending and lift millions out of poverty.

In the year ahead, there will be a higher risk of disruptive events such as protests and failed reforms, as well the election of populist leaders. The outlook is worse for countries that have high levels of discontent and a greater need for painful adjustments, with risks being greater in Argentina, Chile, Colombia, and Ecuador; Brazil's prospects appear more positive but contingent on continuing economic growth. It is hard to see conditions improving for the region over the next couple of years.

One year into Brazilian President's Jair Bolsonaro's term in office, how successful has the controversial figure been in delivering on his agenda?

Bolsonaro has made good on his promise to shake up business as usual in Brazilian politics, by, for example, refusing to distribute cabinet positions to parties in exchange for their support in congress. And though he is a polarizing figure who attracts a lot of opposition, he managed to push through the most ambitious pension reform ever in Brazil, as well other measures to open its tightly regulated economy to more private investment. This has happened partly because the spending cuts made by Bolsonaro have created incentives for lawmakers to try to attract more investment for their constituencies. Despite the lack of a formal alliance, this dovetailing of interests will probably continue next year, improving the chances of a second round of fiscal reforms needed to continue the process of repairing the government's finances. The biggest risk is posed by the potential for faltering economic growth; if growth is too weak, lawmakers may cave to pressure from voters for more stimulus. An incomplete fiscal adjustment would spook investors, dent growth even further, and set up a potentially riskier election cycle in 2022.