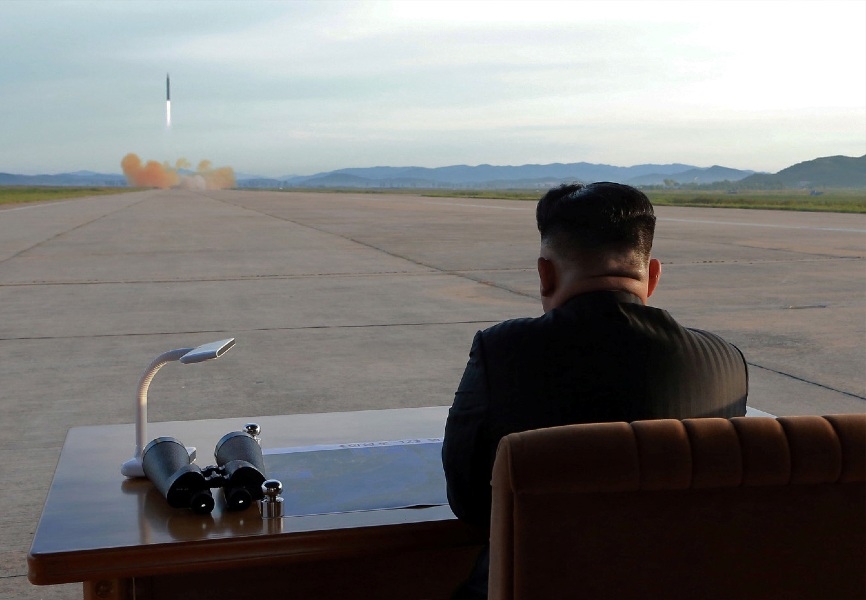 North Korean leader Kim Jong-un watches a missile launch. REUTERS.
Early this week, a news site in Seoul reported that North Korean leader Kim Jong-un had undergone heart surgery. CNN and Reuters picked up the story, sending speculation rampant. As the coronavirus has quickly reclaimed our total attention, the world is left wondering two things: what's the actual state of Kim's health, and how much does it really matter?

Let's start with the fact that there is no way to know what the real situation is with Kim's health. South Korea has been downplaying the reports for the last few days, saying it has detected “no unusual developments” in the country; but Pyongyang, which is quick to issue denials of news stories it takes even the slightest issue with, has been noticeably silent.

In a pre-Covid-19 world, Kim Jong-un was a comparatively significant world leader on stage, in the sense that he controlled a rogue nuclear power. Well, almost rogue—while North Korea likes to present itself as a self-sufficient power in its own right that can go toe-to-toe with Western powers, the reality is that the Hermit Kingdom relies heavily on China. As recently as 2017, China was responsible for 90% of North Korea's trade. China has been acting as a sort of check on North Korea for decades now, both out of political/ideological solidarity and for fear that a regime collapse would send thousands of refugees streaming across Chinese borders. And with Donald Trump's arrival on the political stage, China's sway over North Korea became yet one more lever for Beijing to use in its evolving rivalry with the US. The end result was US-North Korean nuclear talks that were more flash than substance. That's where they've remained since.

On that front, Kim's incapacitation or even death would have a sizeable impact, as Trump would suddenly lose his main interlocutor. But Kim was never serious about nuclear disarmament, just as the Trump administration was never seriously pushing for such comprehensive measures. And all that was before coronavirus hit and the US presidential election was in full swing, which Trump will need to win for these talks to pick back up again.

The real question is what an ailing Kim might mean for North Koreans. After all, the vast majority of North Koreans have only lived under the rule of Kim, his father or his grandfather. The Kim regime has options, like rerunning old footage of Kim for North Koreans, which would buy them time at home but risk prompting outside observers to think change is afoot. Yet the news of an incapacitated Kim is unlikely to lead to massive political change in North Korea. Why? The J-curve.

Years ago, I wrote this book about how countries need to balance the openness of a society with the stability of its political regime. The graph looks like this: 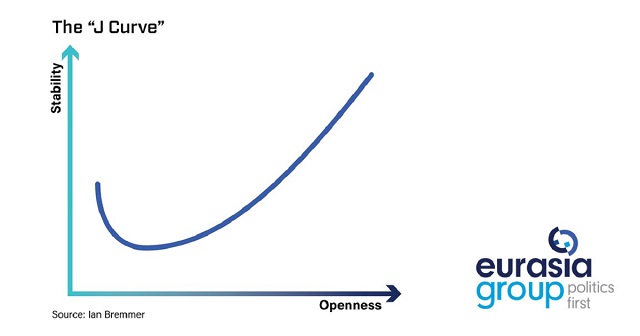 Countries on the left hand side, or the shorter part of the letter “J”, are stable precisely because they are closed off from the rest of the world and repress their populations; countries on the right hand side of the curve tend to be even more stable as open systems allow for easier transition from one person in power to the next without threatening the entire system.

When I wrote this book, North Korea was firmly on the left-hand side of the graph, and it's stayed there—today, North Korea's political stability very much depends on remaining closed off from the world and tightly controlling the populace.

That isolation and repression makes things easier for the ruling elite, many of whom have tied their fates to Kim and the system he has put in place. Even without Kim, that system will remain in place, as the people in power have all the incentive in the world to keep their privileged positions in it.

Should Kim be permanently incapacitated—still a massive unknown—his sister Kim Yo-jong is the frontrunner to replace him as head of the country. That's because Kim's children are too young to take up the mantle, and his older brother (Kim had a half-brother assassinated in Malaysia) seems more interested playing guitar than running a murderous regime (well, wouldn't you be?). And keeping leadership in the family is crucial—North Korea's political mythology circles around the Kim family specifically. It is also possible that she remains in place until one of Kim's children is old enough to assume the country's leadership.

But as the world has recently taught us, there's also value in expecting the unexpected. So what happens if the transition of power doesn't go smoothly to either his sister or some other trusted member of the country's ruling cabal? In that instance, the upheaval in North Korea would mean the international community will have three distinct priorities. The first will be to track, locate and lock down all the loose nukes up for grabs as the North Korean regime implodes; the second priority will be to manage the inevitable refugee waves set to come, both into South Korea as well as into China. The third priority, and one way further down the list, is building the country back up.

Global cooperation has seen better days; as the country of scale with the most investment into North Korea—and not to mention proximity—expect China to play a leading role by default.

That coronavirus is nothing but bad news for a country as impoverished as North Korea … and one that borders China. That said, it may turn out to be a blessing in disguise for the country's leadership, as it gives them more cover to make any political transition necessary out of the glare of the world's spotlight as countries remain focused on their own pandemic responses at home.

The one thing to say about it on a Zoom conference call;