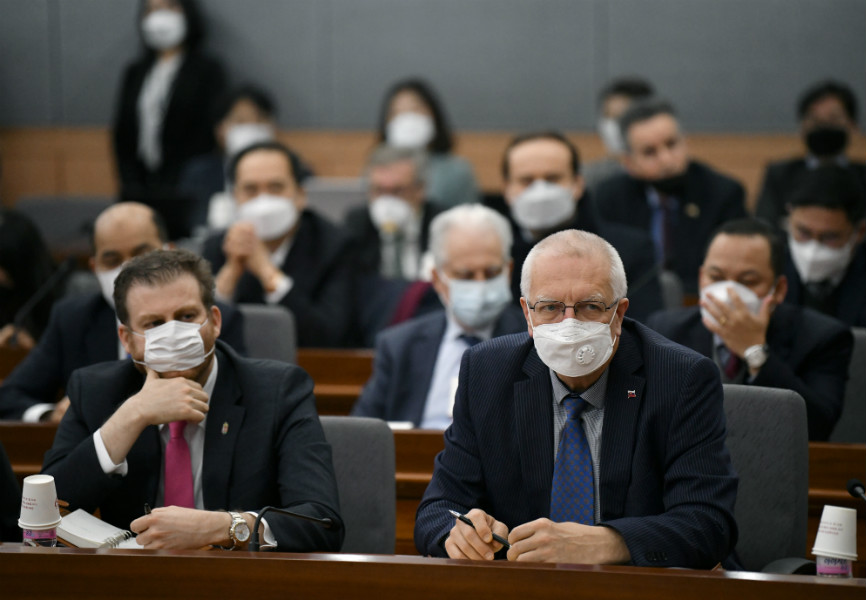 Foreign diplomats attend a briefing on coronavirus by South Korean Foreign Minister Kang Kyung-wha. REUTERS.
Nearly three months since the first cases of the coronavirus now known as Covid-19 appeared in Wuhan, China, the disease continues to spread unchecked around the world, infecting new people by the thousands and testing the credibility of the authorities leading the response. The political fallout, in some cases, could further complicate containment efforts. Eurasia Group experts analyze the challenges faced by authorities in some of the key battlegrounds against the disease.

As ground zero for the outbreak and home to tens of thousands of infected patients, the stakes are the highest in China. President Xi Jinping views the epidemic as a critical governance test for the Chinese Communist Party and thus his own rule. Quarantines and local-level lockdowns have brought China's economy to a standstill but have also allowed Beijing to steadily bring down the number of new cases. China is now in a critical period, with Xi telling officials to restart work and production in areas of the country without large outbreaks, but also to not relax vigilance in containing the disease. New infections would be highly embarrassing for Beijing at home as well as abroad. Local governments are employing electronic surveillance measures and other tools to monitor the population and stop new outbreaks as millions return to work. But the overall result of this cautious approach is a very slow pace of recovery for the economy, which was already grappling with the effects of a long-running trade war with the US. Beijing is thus under increasing pressure to roll out new stimulus measures. Here, too, officials must tread cautiously given high debt levels and other economic imbalances. The authorities for now are focused mainly on fairly targeted measures—lower lending rates, fiscal aid to local governments, and suspension of employment-related taxes.

The large number (over 6,000) of people infected by the coronavirus and accusations that his administration has not moved hard and fast enough to stem the outbreak have taken a toll on President Moon Jae-in's popularity just when his party is gearing up for National Assembly elections next month. Conservatives and other detractors allege that Moon has not imposed tougher restrictions on Chinese entering the country because he is prioritizing political and economic relations with South Korea's giant neighbor at the expense of the Korean public's health. A petition calling for Moon's impeachment largely owing to his supposed softness on China was submitted to the Assembly last week. Meanwhile, news of temporary closures at facilities operated by firms viewed as critical drivers of South Korea's economy such as Samsung, Hyundai, and LG has heightened concerns about virus-related supply chain disruptions. If more Korean business operations are halted or curtailed, voters are likely to become more anxious—and resentful.

The government's response to weak economic conditions and the coronavirus scare was initially focused on trying not to stoke fear among the populace and markets about risks to public health, the economy, and most important, the Olympic Games to be held this summer in Tokyo. But concerns that the situation was not under control have prompted Prime Minister Abe Shinzo's government to redouble its efforts to provide more support to stem the outbreak. Authorities called last week for elementary, middle, and high schools to be closed for several weeks to help contain the outbreak. If more parts of Japanese society and the economy go offline, the risk will increase that momentum behind preparations for the Summer Olympics slows, feeding into fears that the Games might be canceled. While Abe's grip on power is still firm and he will likely be able to ride out the storm, the loss of the Olympics would deal another blow to the public's confidence in the economy and his leadership.

Though the country is grappling with the largest number of cases in Europe, the coronavirus has a silver lining for the embattled government of Prime Minister Giuseppe Conte: barring major mishaps, the outbreak reduces risk of government collapse. Both members of the fragile ruling coalition, as well as opposition parties, would now struggle to make a convincing case for changing the government, let alone triggering elections while Italy is battling a significant health emergency. It is also noteworthy that the regional governments involved in fighting the outbreak are run by the far-right opposition Lega party, which will increase incentives to maintain a peaceful co-existence with the ruling parties in Rome. Regional governments are responsible for healthcare policy, meaning they are heavily involved in the response, but will also share some of the responsibility if the crisis gets out of control. Though elections are unlikely this year, the long-term impact of the crisis on political stability is more uncertain, especially if the health situation worsens dramatically or Italy is hit by a severe recession.

The outbreak could be the first major crisis of President Donald Trump's administration, and it is happening in an election year. It is not easy to anticipate how the potential spread of the coronavirus could affect the presidential race, but the balance of risks is more to the downside for Trump, for a few reasons. First, this is poised to be a very close election. Though the incumbent, Trump is vulnerable given the polarized environment and his strong negatives. That vulnerability would increase dramatically should Trump be perceived as bungling a health crisis. Second, in this polarized environment, the likelihood of Trump benefiting from a “rally around the flag” moment with the coronavirus is smaller. Regardless of the efficacy of the administration's response, tensions between Democrats and Republicans in an election year will make each decision highly scrutinized and politicized. Moreover, Trump's initially mixed messaging sharpens the risk that his own actions could exacerbate fallout from a severe, persistent spread as citizens look to the government for clear and cohesive action.