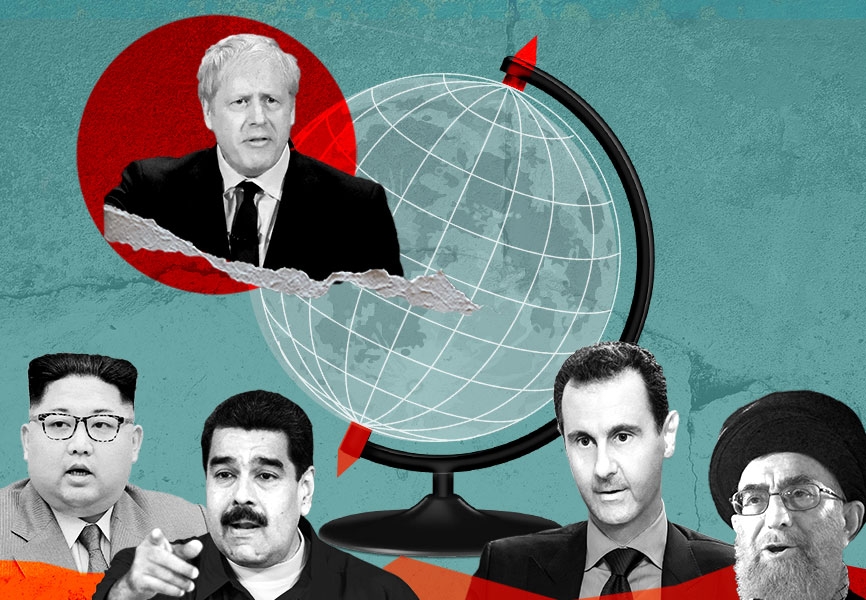 In January, we described how the new “Axis of evil”—Iran, North Korea, Venezuela, and Syria—was unlikely to blow up in 2020, despite the headlines. Iran represents the biggest threat, but neither Trump nor Tehran want all-out war.

Iran, North Korea, Syria, and Venezuela remain adamantly anti-American, but war with the US this year is now an even more distant possibility. Facing a domestic public health crisis, Trump's inclination toward military adventures against these countries is even less than before. And none of these states will likely seek a confrontation.

Iraq has graduated from the “axis of evil,” but Iran and North Korea remain US bogeymen. Add Venezuela and Syria to the list, and you've got quite a group of committed US adversaries. But unlike Bush's original list, which precipitated US regime change in Iraq, Trump isn't going to do much to topple his antagonists and accordingly the United States is unlikely to open a new war in 2020.

Iran is the biggest challenge. After the US's assassination of Suleimani, the Islamic Republic will need to retaliate. That includes a faster ramp up of its nuclear program, an expansion of its proxy war, and probably even direct strikes against the US and allies. But neither Trump nor Tehran wants war. The US president abhors foreign ventures; a fight with Iran would be a big one that could hurt him during the election campaign. For all their bluster, Iranian elites retain a healthy respect for US power. Meanwhile US allies (especially Saudi Arabia and Israel) are chastened by a lack of US support for confrontation; Saudi Arabia in particular is looking for ways to ease tensions. A diplomatic resolution remains a longshot, but we'd still bet against a major US-Iran war.

North Korea will play “hard to get” over the coming months. Pyongyang knows that Trump is desperate for a foreign-policy win and that it's better off with him than any other plausible US president. So it will feel safe pushing ahead with headline-grabbing escalation—provocations with the missile program and maybe even a satellite launch or an intercontinental ballistic missile test. Still, that's ultimately about securing sanctions relief, not bringing the US to the brink. We're taking the under.

Compared with Iran and North Korea, Trump cares little about the fortunes of Syria or Venezuela. He'll continue to draw down troops in Syria, despite the inevitable consequences that Russia and Iran will benefit and the Islamic State can reorganize. Venezuelan President Nicolas Maduro will continue to preside over a government that has destroyed its nation but poses little risk to anyone but its neighbors. The odds of Trump taking military action in Venezuela are close to zero.

In January, we argued that the world's advanced industrial democracies (the US, Europe, and Japan) remain well-positioned to withstand the populist storm this year.

The coronavirus has strained public confidence in government in many countries, but it doesn't herald a populist resurgence with major near-term policy implications in the US, Europe, or Japan. This is an absolutely critical point as we look ahead to the global economic and political system in the eventual aftermath of the pandemic. In the US, the outbreak will increase pressure for universal health care, although these demands will be funneled through Biden's decidedly establishment candidacy. The EU has acted pragmatically during the crisis, undercutting populist campaigns against Brussels. Given the possibility he could be forced to cancel the Olympics, Japanese Prime Minister Shinzo Abe is under some of the greatest near-term pressure, but his departure wouldn't markedly change governance for Japan.

Populism continues to surge around the world, capturing more media attention along the way. Yet, for all the aggressive rhetoric and colorful characters, the world's most-established democracies remain well-positioned to weather the populist storm for at least the next year … though for different reasons.

In the United States, the policymaking process remains captured both by special interests and the country's professional policy corps (what Trump calls the “deep state” but is actually a “deep bureaucracy”). In Europe, individual countries continue to experience a surge by populists at the national level, but their disruption has been limited by the supranational architecture of the European Union, a durable set of rule-making institutions staffed by the most technocratic personnel on that side of the Atlantic. The United Kingdom—in leaving the EU—is the exception, but under the majority leadership of a maximally unideological Boris Johnson, gets a short-term break (please see our next red herring). For its part, Japan has sidestepped the political phenomenon of populism, the result of a unique combination of low inequality, limited migration, aversion to military adventurism, and the comparatively small reach of “fake news.”

In the near term, populist politicians will have little impact on policy.

This doesn't mean these countries will be insulated from populist policies indefinitely. Slowing global economic growth, climate change, and labor displacement will strengthen populist politicians over time. But for 2020, there's not much policy impact.

In January, we described how a big win for Prime Minister Boris Johnson and his Conservative Party, and an historic loss for Jeremy Corbyn's Labour Party, gives the UK a much-needed break from Brexit madness in 2020.

The coronavirus outbreak has added complications to already messy negotiations between the UK and the EU. The coronavirus means limited face-to-face talks, and it may weaken the UK government's commitment to its “divergence” agenda over fears that UK business would face added bureaucratic burdens on top of coronavirus effects (not to mention that Johnson will be politically weaker for having badly mismanaged the crisis). Nevertheless, a narrow UK-EU goods deal or a prolongation of the talks remain the most likely outcome, meaning 2020 in the UK is still a red herring.

Finally, the United Kingdom gets a break. A big win for Johnson and his Conservative Party—and an even more historic loss for Jeremy Corbyn's shambolic election efforts—gives the Brits some much needed breathing room.

The UK will (finally!) leave the European Union on 31 January, putting to rest nearly four years of unprecedented political uncertainty. Johnson's new Conservative majority will vote through the withdrawal agreement and “political declaration” to formalize the UK's exit later this month.

Johnson will lead a “divergence government”—one that prioritizes the UK's regulatory freedom from Europe to do things differently—even if this limits access to the single market and creates substantial headwinds for the UK's economy and its industrial heartlands. Despite this, there is unlikely to be much impact in 2020. The United Kingdom will remain in a standstill transition for all of this year, even as negotiations get rocky (which they invariably will). This will offer investors a degree of certainty through all of the noise, if only for 2020.

And having just won in Brussels, Johnson isn't about to risk the union. So while Scotland will also be noisy, there is no chance this year of an independence referendum. True, Nicola Sturgeon's Scottish National Party's strong showing in December's election has buttressed her claim that Scotland's interests are being ignored. But it is only over time that the UK's creaking economy will reinforce her push for independence.

This is not a top risk year for the UK. But not to worry for those who miss it—there's surely more political trouble down the road.