Election will mark the end of an era in Nigeria 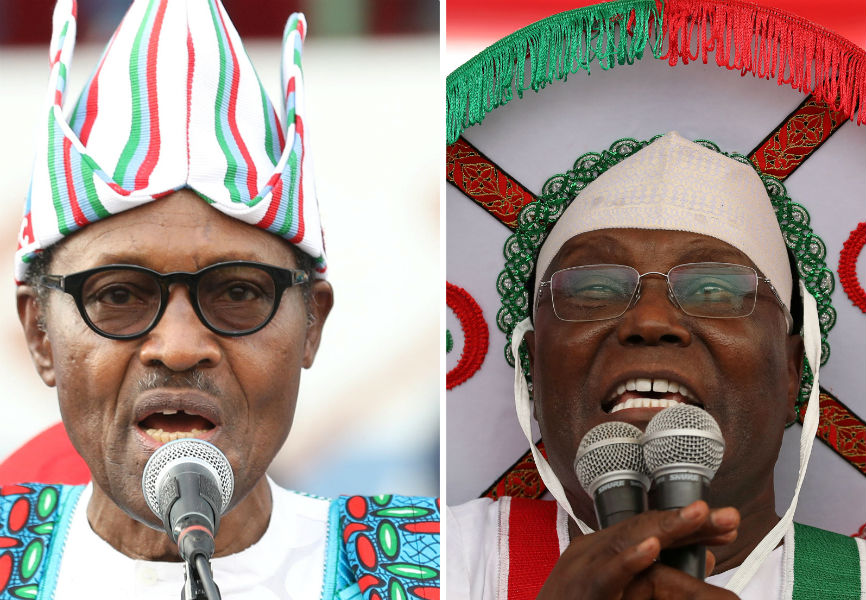 Buhari and Atiku on the campaign trail. REUTERS.
Editor's note, 21 February 2019: Hours before the polls were scheduled to open on 16 February, Nigeria's Independent National Electoral Commission announced that it would be postponing national and state elections due to logistical issues. The presidential election is now set to take place on 23 February and state elections will be held on 8 March.

On 16 February, Nigerians will go to the polls for the sixth time since the country's transition to democratic rule in 1999. They are faced with two uninspiring choices: incumbent President Muhammadu Buhari, whose ability to govern has been impaired by declining health and a lack of political savvy, and opposition candidate and former vice president Atiku Abubakar, widely accused of having used his office to amass significant wealth. Many dislike both options and would rather have a fresh face lead Africa's most populous nation, but Nigeria's brand of elite-dominated politics has made it nearly impossible for a political outsider to break through.

That could change after this weekend's election.

Despite well-deserved criticism leveled against Buhari for his non-consultative governance style, slow decision-making, and poor communication skills, he has begun a low-grade transformation of Nigeria's political system. Before Buhari, there was a simple consensus at the core of Nigeria's political configuration: that the country's elite would share in the spoils of political activity. That meant that ruling party governors got their pick of cabinet and other plum government appointments, officials turned a blind eye to a massive petroleum import scam that benefited their political allies, and political parties spent huge sums of money during elections to dole out the wealth to party members.

Buhari won election in 2015 by campaigning against this status quo and has shown that it is possible to weaken these patronage networks and still govern. The petroleum import process is now handled exclusively by the national oil company, bypassing private petroleum marketers and middlemen. Many in the political class have been locked out of the federal appointment process or secured fewer plum positions than they used to. The 2019 national election season has been the cheapest in Nigeria's history, alienating many who have built careers on cashing in on election season largesse. Thus, should Buhari win reelection this weekend, it would send a powerful message that with robust grassroot support (Buhari maintains strong popular appeal in the country's northern region), one can successfully challenge the system.

Yet the weakness of Buhari's policies is that they depend almost entirely on fiat and his personal preferences, rather than structural changes that may outlast him. In fact, his party is full of politicians who made their fortunes by leveraging political office; even some in his inner circle are doing the same. Still, by ignoring or actively dismissing the old norms of political engagement, Buhari has deepened a fracture in Nigeria's politics that could yield benefits for governance. Coupled with improvements to the credibility of the electoral process begun under previous president Goodluck Jonathan, Buhari's changes could force individual actors to rebuild political capital by strengthening their support among voters.

These dynamics coincide with a broader generational shift. Buhari and Atiku's generation, which has ruled since independence in 1960, is now past retirement age. Saturday's election is likely this generation's last stand. Sixty percent of Nigeria's population is under 25 years and over 50% of registered voters are between 18 and 35. This year, those born after Nigeria's transition to democratic rule in 1999 will vote for the first time, and most do not identify with Buhari's All Progressives Congress (APC) or Atiku's People's Democratic Party (PDP). As the strength of the old political networks decline, both parties will be forced to compete for these new voters.

The competition will sharpen a nascent political-ideological divide. The ruling APC has begun to position itself as a social progressive party, one that is concerned with the plight of the poor and is willing to deploy state resources to protect them. The opposition PDP has cast itself as the party of business, one that will focus on creating a favorable environment for economic growth. To boost its chances in a post-Buhari era, each side must now clarify and develop these governing philosophies to woo voters. This augurs well for democratic consolidation and improving accountability. And, as the influence of Buhari's generation continues to decline, the shifting political dynamic will open the door to newer, younger politicians to help build a new political consensus.