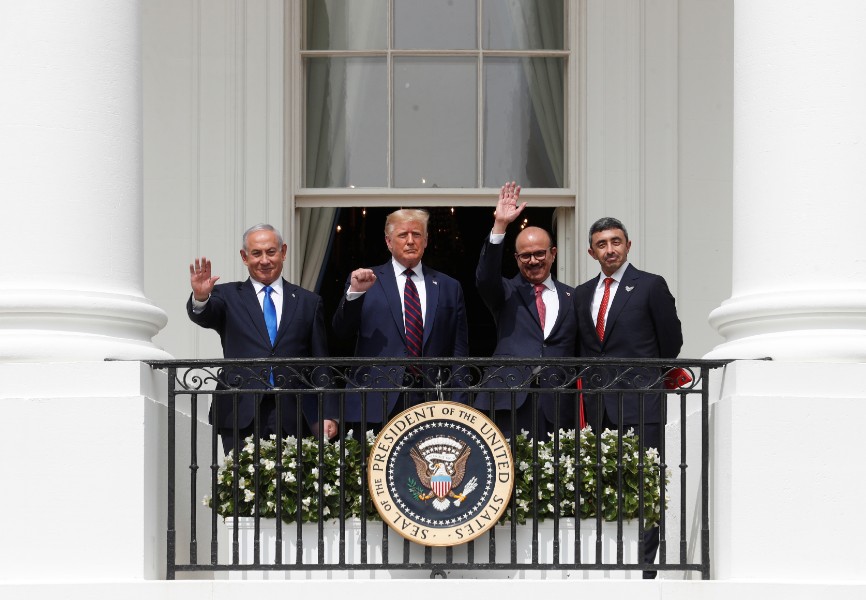 Israeli Prime Minister Benjamin Netanyahu, US President Donald Trump, Bahrain Foreign Minister Abdullatif Al Zayani, and United Arab Emirates Foreign Minister Abdullah bin Zayed at the White House following a signing ceremony for the Abraham Accords, normalizing relations between Israel and Bahrain and the United Arab Emirates. REUTERS.
At a White House ceremony Tuesday, representatives of the UAE and Bahrain signed historic agreements to normalize relations with Israel, the first since Jordan recognized the Jewish state in 1994 and Egypt did so in 1979. The deals signal a desire on the part of major Arab countries to establish a new regional order to counter the influence of Iran and Turkey.

The UAE leads the way

The UAE was the first Gulf country to decide to put aside decades of hostility and sign an agreement with Israel. Though covert ties between the two have existed for years, the deal will allow for deeper political cooperation and commercial ties and permit the UAE to boost its standing in Washington. It also represents a win for President Donald Trump, whose constructive relations with Gulf countries allowed for a breakthrough in the run-up to November's election on an issue that has bedevilled successive US administrations. The UAE's deal probably included a commitment on the part of Israel to halt its annexation plans of areas in the West Bank.

Bahrain's decision, announced soon after the UAE's, points to a broader regional shift, as its leadership undoubtedly consulted with Saudi Arabia and was given the go-ahead by its powerful neighbor. The UAE and Saudi Arabia are both interested in forming a new regional order to contain Iran and Turkey; bringing Israel into the fold supports this aim. Tehran and Ankara have been expanding their influence in the region, fueling anxiety in some Gulf capitals. Concerns over US disengagement heightened the sense of urgency and accelerated the shifts in stances toward Israel.

Though Saudi Arabia gave a greenlight to Bahrain to proceed, Riyadh will likely link normalization of its own ties with Israel to progress on the settling the Palestinian conflict and move more slowly—though surprises are possible. King Salman remains strongly invested in the fate of the Palestinians, making normalization unlikely during his reign. The Saudi leadership also recognizes that its population is more conservative and normalization efforts could hurt the kingdom's position as a key Muslim and Arab power center. Crown Prince Mohammad bin Salman could prove more flexible following a transfer of power from his father, as he is not ideologically attached to the Palestinian issue.

The Trump administration, meanwhile, has been trying to get more countries of the region to recognize Israel. Omani Sultan Haitham bin Tariq is open to doing so but will tread cautiously. The country values its mediating role between Iran and the West and is therefore hesitant to make a change that could compromise this geopolitical position. Sudan's transitional government has made clear it lacks the mandate to decide on normalization, but it is also eager to shed its US designation as a state sponsor of terrorism and could be swayed if the Trump administration links the two issues. Bahrain's move could also embolden voices within Sudan that are more supportive of normalization. 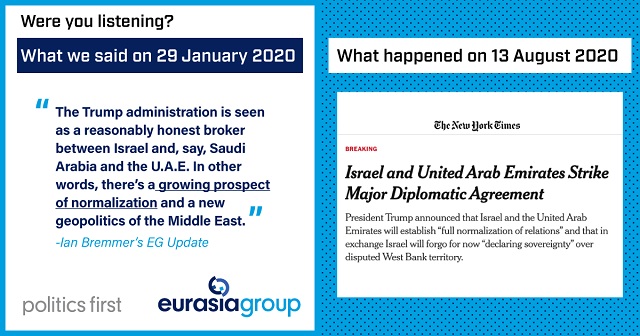 Other Arab states will stick more steadfastly to a neutral position owing either to geopolitical or domestic constraints. Kuwait and Iraq, for example, are not supportive of the trend toward normalization but are unlikely to harshly criticize it. Qatar will continue to prefer cooperation with Israel behind the scenes to recognition.

Meanwhile, the agreements struck with Israel by the UAE and Bahrain will face several serious challenges over the long term. Critics of normalization could spur more dissent against rulers, arguing that the Palestinians are being sacrificed in the interest of developing trade and investment ties and containing Iran. Over the longer term, given that the potential annexation of Palestinian areas in the West Bank remains on the table, this issue could lead to more serious diplomatic problems by embarrassing Arab leaders.