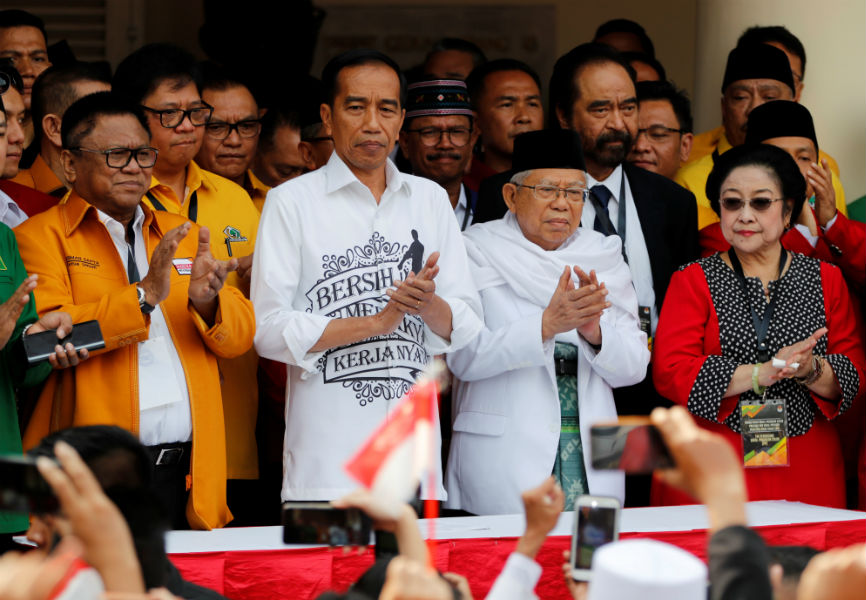 Initial legislative election results show that Islamist parties have secured a similar share of the vote as the last election, defying predictions that they would lose ground.

Jokowi's reelection averts what would have been a worse outcome for Indonesia's young democracy, a victory for Prabowo Subianto, a former army general who had promised to welcome back home the leader of an extremist group calling for Sharia law from his self-imposed exile in Saudi Arabia.

Still, the Jokowi-Amin ticket highlights a trend of Islamization of politics in which mainstream politicians increasingly wear their religions on their sleeves and seek to promote Islamic goals, taking some of the oxygen away from explicitly Islamist parties.

As vice president, Amin is likely to focus on increasing support for Muslim social groups and Islamic schools and mosques, as well as on accelerating the development of Islamic finance.

Identity politics has long been a feature of Indonesia's political landscape, most notably during the anti-ethnic Chinese riots of the late 1990s.

But its focus has largely shifted to religion from race following decades of funding for conservative schools provided by Saudi Arabia and the efforts of domestic Islamic groups to tap into growing concerns over inequality.

So the situation in Indonesia has parallels to identity-based populism elsewhere in the world but with a distinctive religious dimension.

“Indigenous” Indonesians are overwhelmingly Muslims and vice versa, but the change in how people identify themselves is changing the country's secular democracy. While its young institutions are not under severe threat, they have been weakened by the Islamization of politics, as well as by some backward steps in the democratic process.

Social policies and dynamics are also affected. According to the Pew Research Center, 93 percent of Indonesians believe religion plays a very important role in their lives, one of the highest levels in the world.

Many Muslim women in Indonesia feel more social pressure to wear the jilbab than in the past, though some claim it is more of a fashion trend. LGBT rights have come under greater threat.

Rising Muslim populism also feeds economic nationalism and shapes the environment for business and investment in other ways, most notably through the upcoming implementation of a 2014 law that requires mandatory halal labeling for many products.

The focus of government spending is also affected—both in terms of increased public funding for religious causes, as well as through greater political emphasis on tackling the inequality concerns that feed identity politics. This has made improving health care, in particular, a priority for Jokowi.

In addition to the efforts to promote a greater role for Islam in the political process, there have been instances of whipping up Muslim sentiment in order to achieve political (not religious) goals, such as during the divisive Jakarta gubernatorial election of 2017.

Ethnically Chinese and Christian Governor Basuki Tjahaja Purnama was voted out of office and then charged with blasphemy by his political opponents following mass demonstrations led by hardline Islamists.

Amin was one the leading clerics calling for action against Ahok, which should make him an effective shield for Jokowi against identity politics-driven attacks.

Still, the trend of the Islamization of politics is likely to recede only if authorities succeed in tackling the underlying inequality that feeds identity politics, and if Saudi Arabia adopts a different approach to promoting religion overseas under a new leadership. Neither is likely to occur in the near term.