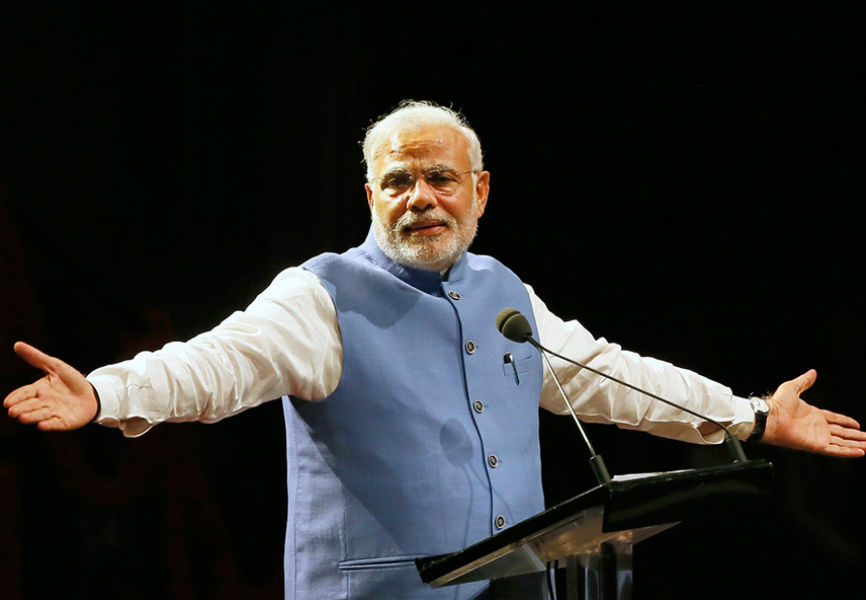 Indian Prime Minister Narendra Modi. REUTERS.
Voters in the world's most populous democracy head to the polls today in general elections that will run through 19 May. As Eurasia Group expert Akhil Bery explains, Prime Minister Narendra Modi and his Bharatiya Janata Party (BJP) are the favorites to win but will likely see their support fray somewhat after failing to deliver on some key electoral pledges.

How has Modi changed India over the past five years?

Modi swept to power in 2014, securing the first parliamentary majority for a single party since 1984 with the help of a presidential-style campaign that aggressively promoted the charismatic politician's image. He promised to usher in an era of prosperity, akin to what he accomplished as chief minister of Gujarat.

Modi has been the most business-friendly prime minister India has ever had. In a country in which private investment was once viewed with skepticism, Modi has openly embraced it through his signature “Make in India” campaign. This effort has trickled down to the states, which now compete against one another to attract investment and are ranked on their ease of doing business. Early in his tenure, Modi was intensely focused on economic overhauls that could help the country move up in the World Bank's Ease of Doing Business index. FDI flows into India have surged as a result.

Modi has also changed India's foreign policy, abandoning its traditional stance of non-alignment in favor of closer defense and security ties with the US and Israel. And the recent flare-up in tensions with Pakistan showed a new willingness to enter Pakistani territory to protect India's interests. However, the prime minister has not been able to deliver on his promise of creating 10 million new jobs; in fact, a leaked government survey indicated that unemployment is at a 43-year high. And agrarian distress is acute, with many farmers suffering from the impact of a severe drought and struggling because of low food prices. Farmers are an important voting block and the opposition Congress party has won some recent state elections in part thanks to its promise of a national farm loan forgiveness program.

If the BJP has to rely on coalition partners, what will that mean for Modi's economic reform plans?

The BJP is likely to rely on its coalition partners of the National Democratic Alliance (NDA) to obtain a parliamentary majority. That will likely slow, but not stop the reform process. Modi has shown the ability to stitch together coalitions to pass major reforms, most notably lifting the foreign ownership threshold in insurance companies to 49% and passing the goods and services tax. Both required assembling coalitions in the Rajya Sabha (upper house of parliament), where the BJP lacked a majority. Meanwhile, the reform process will continue at the state level. More politically controversial changes, such as land acquisition and labor reforms, which stalled at the national level, have been enacted by a few states, a trend that will likely continue no matter who wins the elections.

What is the current state of the Congress party? Is it still important in India's national life?

For the first 30 years of Indian independence, Congress dominated Indian politics, and ten of the country's first 11 elections yielded Congress-led governments. The emergence of the BJP in the 1990s changed that, and today the two are the only parties that have a presence in every single state.

In the 2014 elections, Congress won only 44 seats in parliament and seemed to be in danger of fading into irrelevance. But its fortunes have rebounded under current leader Rahul Gandhi; Congress recently won the Punjab state elections, won the most votes in Goa, and led the formation of a new government in Karnataka. In December 2018, it put an end to 15 years of BJP rule in Madhya Pradesh and Chhattisgarh. Congress remains an important force in Indian politics, and there is a chance Gandhi could become prime minister at some point.

What other factors are shaping India's politics at the moment?

Powerful regional parties and their leaders are increasingly shaping politics. In 1999, the All India Anna Dravida Munnetra Kazhagam, a Tamil Nadu-based party, withdrew support from the NDA, forcing a no-confidence vote and then new elections.

In the upcoming government formation process, leaders such as K. Chandrasekhar Rao of the Telangana Rashtra Samithi in Telangana and Jaganmohan Reddy of the YSR Congress Party in Andhra Pradesh are in a prime position to play the kingmaker role if the NDA falls short of a parliamentary majority. Similarly, if Congress were to attempt to form a ruling coalition, it would need the support of Mamata Banerjee's All India Trinamool Congress in West Bengal and of the alliance of Mayawati's Bahujan Samaj Party and Akhilesh Yadav's Samajwadi Party.

India is forging closer ties with the US as China rises: Eurasia Group
SUBSCRIBE TO SIGNAL
LOUD WORLD. CLEAR SIGNAL. Signal is a newsletter on international affairs produced by GZERO Media four times a week. No jargon, no nonsense, no noise. Signal is a product of GZERO Media, a Eurasia Group company.