Eurasia Group | Turkmenistan’s president is alive. His country is not well.

Turkmenistan’s president is alive. His country is not well. 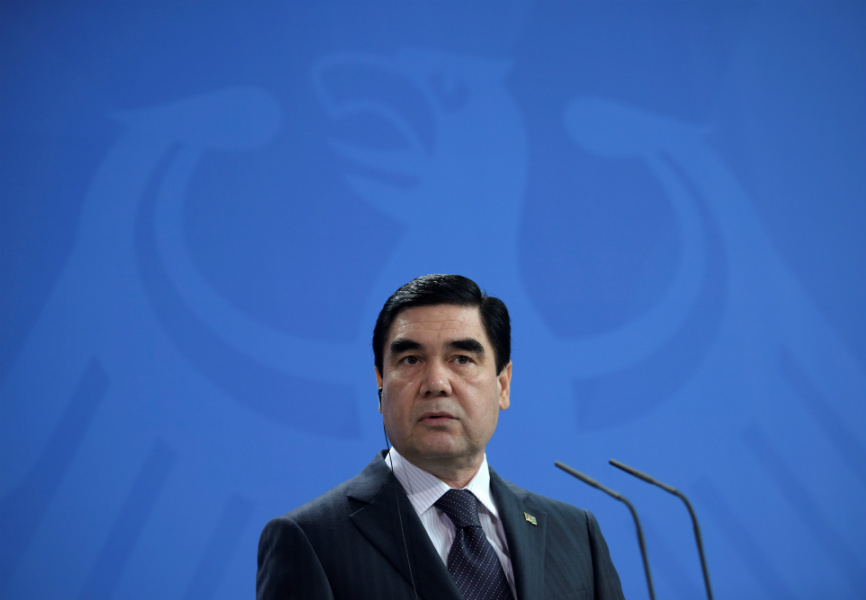 Turkmenistan's President Gurbanguly Berdymukhamedov. REUTERS.
Turkmenistan is not often featured in prime-time Western media. But President Gurbanguly Berdymukhamedov's multi-week disappearance briefly landed the country in the international spotlight, with episodes of “Last Week Tonight with John Oliver” and “The Daily Show with Trevor Noah” diving into rumors of the leader's death (he was on camera, alive and well, at the newly launched Caspian Economic Forum this week). The personality cults of Turkmen rulers have long made for rich late-night material, but the people of Turkmenistan are living through a devastating economic crisis and under a repressive police state. Eurasia Group expert Zach Witlin examines the country and broader Central Asian region.

How did Gurbanguly Berdymukhamedov rise to power in Turkmenistan?

When the Soviet Union collapsed, Saparmurat Niyazov smoothly transitioned from first secretary of the Turkmen Soviet Socialist Republic's Communist Party to become the newly independent country's president. Niyazov was not the only post-Soviet leader to follow this path, but he took presidential power to another level. He named himself Turkmenbashi—the father of the Turkmen—renamed the months of the year after his family members, and infamously erected a rotating statue of himself that was meant to always face the sun. Niyazov made Turkmenistan one of the most inward-looking countries in the world, comparable to North Korea but with a foreign policy doctrine of neutrality.

Previously healthcare minister and deputy prime minister, Berdymukhamedov became president after Niyazov's death in 2006. How he gained the top job is a matter of speculation, but he might have been deemed the least threatening succession candidate to Turkmenistan's political elite. Berdymukhamedov premised his early term on undoing some of Niyazov's most extreme policies. But his control is now absolute, with his own cult of personality as Arkadag (“Protector”), an action-man figure mirroring Vladimir Putin's public persona.

Given the tradition of lifetime rule set by Niyazov and the extreme influence the president has on all aspects of life, rumors of Berdymukhamedov's death were a big deal in the country and among neighbors like Russia, who carefully watch for any changes in power or potential for unrest. The reason for Berdymukhamedov's absence from the public eye is a matter of speculation.

Turkmenistan has no clear succession plan, either. This June, however, his 37-year-old son was made governor of the central Ahal province, suggesting a possible future ascension to the presidency.
"Central Asian countries often make
international headlines for the wrong reasons."
How have Turkmenistan's leaders sustained this system of rule?

Turkmenistan's economy is extremely dependent on natural gas exports, holding the sixth largest proven gas reserves in the world. Its chief customers in recent years were China, Russia, and Iran. But the collapse in commodity prices in 2014, combined with contract disputes with Russia and Iran in 2016 and 2017, have plunged Turkmenistan into a disastrous economic crisis.

Instead of liberalizing the economy or enacting reforms, the government has bet on resolving contract disputes while suppressing any signs of dissent. This year, Russia agreed to restart gas purchases at lower volumes, providing a degree of relief. But it is unlikely that Turkmenistan will talk seriously about reforms until the next president arrives on the scene—much like Berdymukhamedov himself once did.

How are Turkmenistan's relations with other regional players?

Turkmenistan has a foreign policy of neutrality—its main state newspaper is even called Neutral Turkmenistan. But since the lifeblood of Turkmenistan's economy are gas exports, officials in the capital of Ashgabat must engage in complex diplomacy.

That was on display this week at the first annual Caspian Economic Forum, which resulted from a historic convention that partially resolved a decades-long question about how to divide the Caspian Sea among Azerbaijan, Iran, Kazakhstan, Russia, and Turkmenistan. It left most of the hard issues such as resource rights or agreements on future pipeline projects for further discussion, but the forum gave Turkmenistan the chance to host a major regional event.

Turkmenistan also stays out of any security or military organizations, like the Russia-led Collective Security Treaty Organization or the growing Shanghai Cooperation Organization. This occasionally leads to questions about whether Turkmenistan can properly police its 800 km border with Afghanistan.

What is the most important thing to know about Turkmenistan and Central Asia?

People in post-Soviet Central Asia deserve to be recognized and understood on their own terms—not merely as sitting on the periphery of Russia, Europe, or China, as part of regional security problems, or as a joke on late night television (even if rightly aimed at authoritarian leaders).


Central Asian countries often make international headlines for the wrong reasons, such as terrorist attacks with an indirect connection to the region, crises of government, or the occasional gaffe by outside media. In reality, Central Asia is generally safe, but a combination of difficult economic conditions and often staunch state regulation of politics and religion have made some social media users or workers who go abroad prey to recruiters for terrorist organizations. The region figures into the foreign policy of large neighbors like Russia, China, Iran, and countries further away like European nations and the United States—and vice versa, as Central Asian governments must turn to diplomacy to safeguard their independence. But the countries each have a deep history and culture of their own and have fought hard for their own national identities after the Soviet collapse.

Read Central Asia: Stuck in Transition from our Shockwaves—25 Years Out from the Soviet Collapse series.
SUBSCRIBE TO SIGNAL
LOUD WORLD. CLEAR SIGNAL. Signal is a newsletter on international affairs produced by GZERO Media four times a week. No jargon, no nonsense, no noise. Signal is a product of GZERO Media, a Eurasia Group company.