Trump’s trip to India will help leaders of both countries 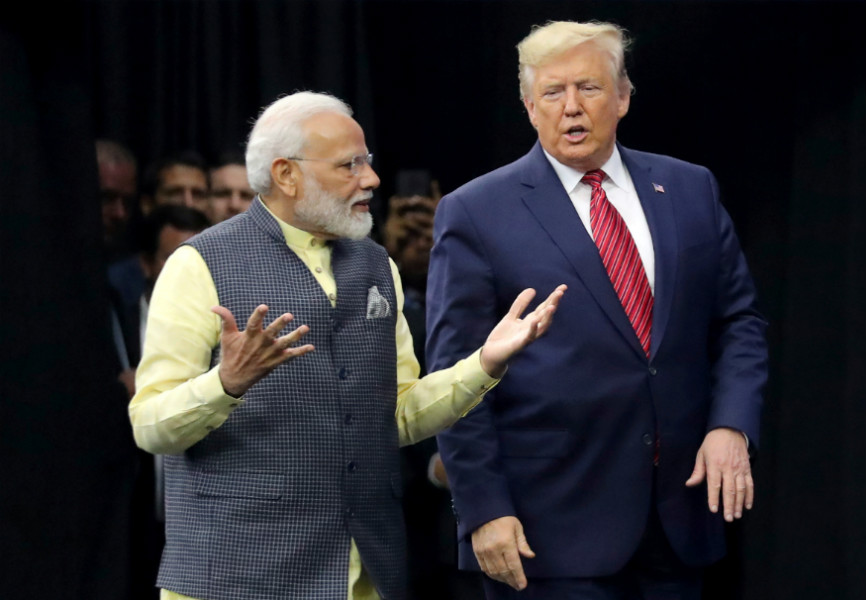 Indian Prime Minister Narendra Modi and US President Donald Trump. REUTERS.
President Donald Trump received a rousing welcome from thousands of locals packed into a cricket stadium in Ahmedabad, India, at the start of this week's trip to the world's most populous democracy. As Eurasia Group experts Akhil Bery and Jeffrey Wright explain, both Trump and Indian Prime Minister Narendra Modi hope to get a political boost from the visit despite receding prospects for a quick resolution to an escalating trade conflict.

What is happening with the trade deal?

The US and India have been negotiating a mini trade agreement since the US announced in 2018 it was reviewing India's participation in the generalized system of preferences program because of a lack of fair and reciprocal access to the Indian market. It also imposed Section 232 tariffs on Indian steel and aluminum in 2018. Tensions escalated when India increased tariffs on several US products in response. The two sides had seemingly made progress toward resolving differences in several areas, including dairy market access and the removal of price controls on medical devices, but the deal collapsed amid further demands from the US and actions by India. In her annual budget, Finance Minister Nirmala Sitharaman increased tariffs on all imported medical devices by 5%, in effect negating any gains made in medical device discussions. Additionally, though digital issues were cordoned off into a separate dialogue, recent decisions by India in the digital payment realm and a proposed tax on e-commerce companies likely factored into US trade representative Robert Lighthizer's decision to postpone further talks until after the US presidential election. India had felt the deal under discussion was the best possible, and viewed it as a confidence building measure, but it felt that the US kept shifting the goal posts, in effect ending any hope of a deal being reached by the time Trump reached India.

What does Modi hope to gain from Trump's visit?

Modi has been trying to get Trump to come to India since the first meeting between the two in 2017. He has been seeking to establish the same rapport he had with Barack Obama. Modi has made a strategic bet on the US, abandoning India's traditional relationship with Russia for stronger ties with the US. Though trade issues have been a significant source of tension, the US and India have deepened their defense relationship over the past few years, and India has become an integral part of the US's Indo-Pacific strategy. India has increased its purchase of US military equipment as well as LNG and oil, further deepening ties between the two countries. Moreover, though still the most popular politician in India, Modi's image has been hurt recently by some controversial policies. Being seen with Trump, who is immensely popular in India, will give Modi boost. Trump is the third leader Modi has brought to Ahmedabad, the largest city in his home state of Gujarat, after the visits of Chinese President Xi Jinping in 2014 and Japanese Prime Minister Shinzo Abe in 2017. The Indian leader likes to emphasize his personal brand of diplomacy.

What does Trump hope to gain?

Trump, for his part, wants to bolster a close strategic alliance with India that is aimed at pushing back against China, particularly at a time of high US-China tensions. India has become a key partner for the US in Asia. The country is even more populous than China, with a growing economy and a democratic political tradition that makes it a natural US ally. Every recent US president has courted closer relations with Delhi, and Trump is no exception. He will also look to secure arms sales for US companies to India's growing military, helping the US economy. Trump sees Modi as a natural ally. Both are nationalists, and both have been repeatedly criticized for comments and actions that are discriminatory against Muslims. Trump likes strong leaders, and Modi's political strength and centralizing impulses appear to have made him one of Trump's favorite foreign leaders. He is returning Modi's visit to the US, when Trump appeared at a “Howdy Modi” rally in Houston. Trump also wants to project an image as a respected world leader, which leverages his key incumbency advantage as he goes into the 2020 election. He'll hope to add to the domestic impact of the trip through images of huge crowds greeting him in India, which his campaign and allies can use to bolster his image at home. Moreover, the two leaders also share some of the same supporters, with an influential subset of wealthy Indian Americans providing support to both leaders.

Situation stabilizes in China as coronavirus cases grow globally
SUBSCRIBE TO SIGNAL
LOUD WORLD. CLEAR SIGNAL. Signal is a newsletter on international affairs produced by GZERO Media three times a week. No jargon, no nonsense, no noise. Signal is a product of GZERO Media, a Eurasia Group company.