Energy consumers are breathing a sigh of relief now that the oil-supply shock expected after the Russian invasion of Ukraine failed to materialize and gas prices, especially in Europe, have fallen back from their 2022 highs. But despite mostly sanguine forecasts for this year, a combination of geopolitics, economics, and production factors will create much tighter market conditions, especially in the second half of 2023. That will raise costs for households and businesses, increase the fiscal burden on consumer economies, widen the rift between OPEC+ and major consumers, and create yet another source of increased tensions between the West and the developing world.

On oil, a faster-than-expected economic recovery in China driven by the country's sudden exit from zero-Covid policies, combined with only a shallow recession in the United States that will not cause demand destruction, will increase crude-oil demand growth and expose an acute lack of new supply. Contributing to the problem are Russian production declines amid continued sanctions, low levels of OPEC+ spare capacity, reduced capital investment in non-OPEC production, and the absence of an Iran nuclear deal (please see risk #5). The supply shocks anticipated in 2022 will drive crude prices above $100 per barrel before the end of the year.

On gas, the European Union's need to rebuild gas storage from the second quarter of 2023 in the absence of cheap Russian supplies will create new competition for LNG and more demand for pipeline gas from Norway and North Africa. That will drive up prices, especially for Europe but also indirectly in North America, Asia, and other regional markets. Markets in Europe already price in almost $50 per million British thermal units (MMBTU) next summer; the price is likely to spike higher as China's growth recovers and global demand for LNG increases. US natural gas prices will also feel the strain, heading above the $5 per MMBTU currently priced in and closer to the $8 or more we saw when European demand for gas drove up US prices in 2022.

High oil prices will place a heavy burden on poorer developing countries, which have limited cash for expensive energy imports and face surging borrowing costs to fill the hole, resulting in energy shortages and social discontent. Angry over having to shoulder costs for sanctions on Russia they didn't agree to, emerging markets will chip away at the Western sanctions regime by continuing to trade with Russia. Two of the world's three biggest energy consumers, China and India, will continue to buy large quantities of Russian crude at a steep discount. The United States will respond by hitting some emerging markets (albeit not China or India) with secondary sanctions, further inflaming tensions between industrialized economies and emerging markets already rocked by high inflation (please see risk #4), the war in Ukraine, the Covid-19 pandemic, and climate change.

Higher oil prices will also increase frictions between OPEC+, led by Saudi Arabia, and global consumers, led by the United States, as both sides pursue conflicting fiscal objectives. OPEC+ wants to protect a price floor of about $90 per barrel for Brent (some in the West think $100), much higher than before the Ukraine war and at odds with consumer preferences. This divergence will increase conflict between the US and its Gulf allies with rising grievances already driven by Washington's pivot to Asia, its transition to non-hydrocarbon energy, its focus on domestic production, and the Gulf's growing energy and security ties with China. Not to mention the Biden administration's focus on human rights and “democracy vs. autocracy,” as well as its move to build an oil consumer cartel of sorts. Higher prices will prompt the US to intervene directly in markets and punish moves by oil-producing states it sees as (at least partially) politically motivated.

Regarding gas, high prices and supply limits will require more financial support from already stretched European governments, fueling calls for more EU-wide borrowing to help member states shoulder the burden. This comes on top of energy costs for households and businesses in Europe doubling between 2021 and 2022, despite government efforts to cushion the impact of extreme wholesale price spikes. The EU's industrial sector will remain at risk of government-mandated curbs on gas supply, threatening energy-intensive sectors such as steel, aluminum, and fertilizers, and creating an overall drag on economic growth. While extended gas shortages in Europe will be avoided thanks to reduced consumption and close cooperation with allied suppliers such as the United States and Norway, the risk of temporary power outages will remain high. 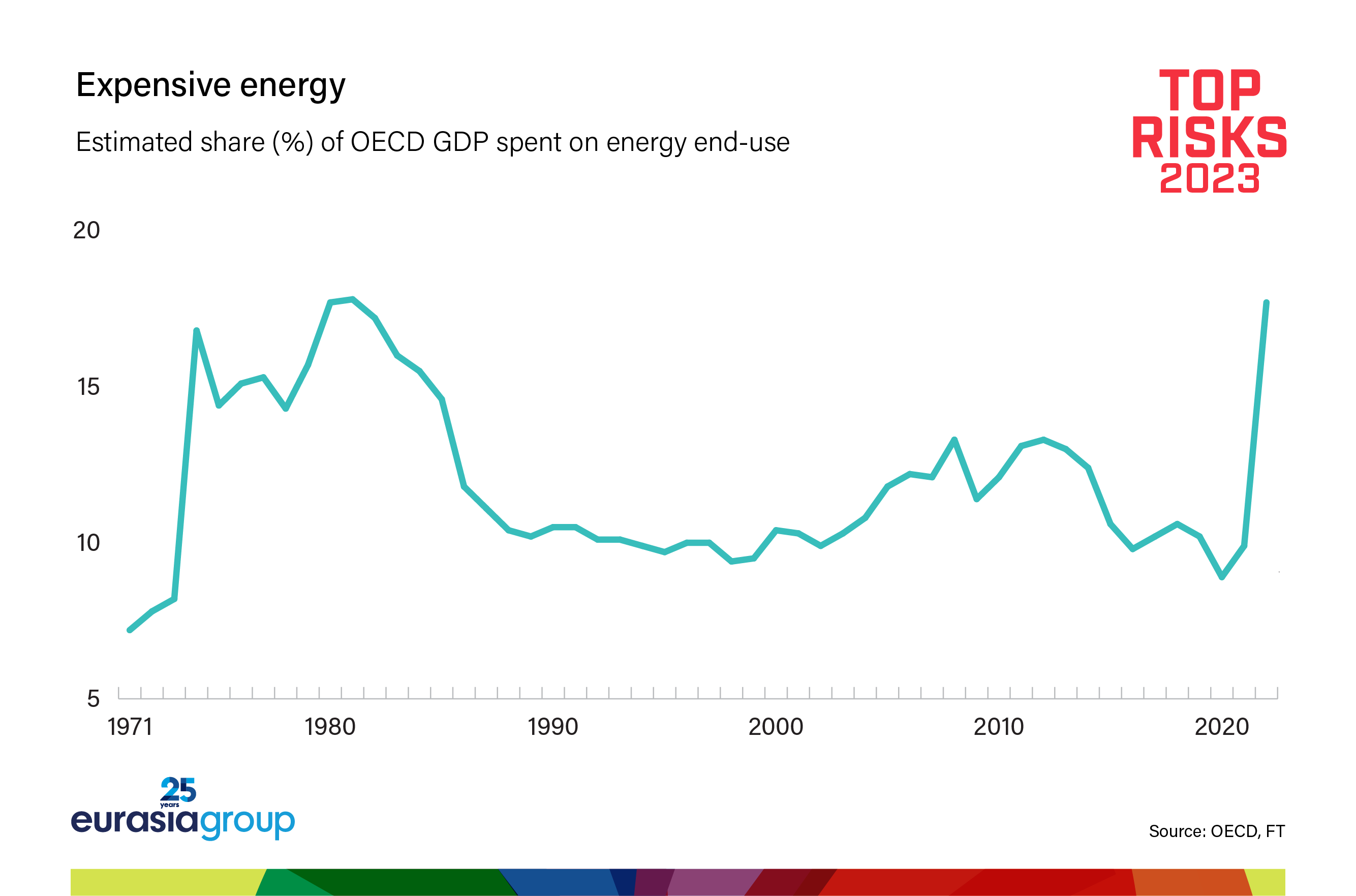 High gas prices as Europe seeks to secure adequate supplies for the 2023-2024 winter will leave energy-hungry states in South and Southeast Asia priced out of the LNG market for long stretches of 2023. The impact will be felt most acutely in the agricultural sectors of emerging markets, where fertilizer costs and food prices will increase again following the war-induced spike of 2022. As with oil, the result will be widespread energy shortfalls, food insecurity, and social unrest.

In short, the respite in energy markets this winter will be temporary—the eye of the hurricane before a renewed energy crunch adds to pressure on consumers, puts fiscal strain on governments, and deepens divides between developed and developing nations and the United States and Gulf countries.