Risk 5: Iran in a Corner 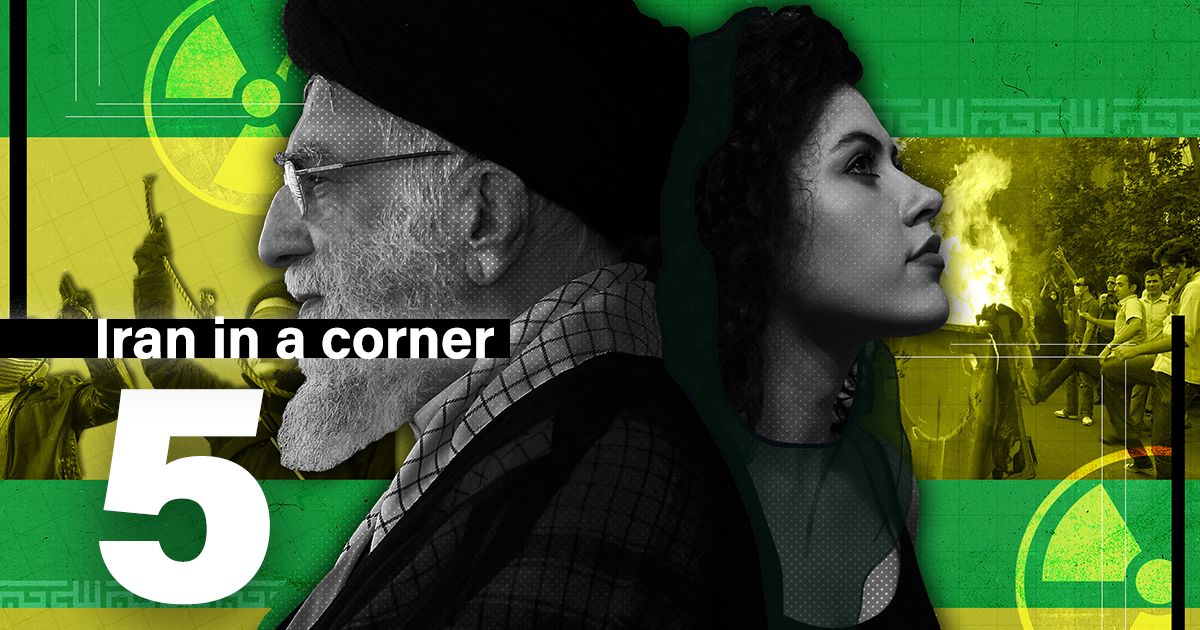 More than three months after a young woman named Mahsa Amini was killed by Iran's so-called Morality Police, nationwide anti-government protests continue. At the same time, Tehran has escalated its nuclear program in dramatic ways, all but ending any chance of reviving the nuclear deal. And now Iran has wedded itself to Putin's imperial ambitions in Ukraine. Facing convulsions at home while lashing out abroad, this year will feature new confrontations between the Islamic Republic and the West.

Led by young people and women, protests have spread across the country—creating the most serious popular threat to the state since the revolution that brought the Islamic Republic to power in 1979. The demonstrations are explicitly anti-government, with protesters calling for the fall of the clerical regime. In response, the authorities have killed more than 500 people, according to human rights groups. Tehran has ceded no ground on demands for meaningful reforms. Faced with popular unrest, the state has shown that it lacks any capacity to respond except with repression.

The protests are leaderless, dispersed, and attract relatively small numbers—all factors that make them unlikely to overthrow the Iranian regime. But they've also been remarkably persistent, with security services so far unable to crush the protesters as they did in previous rounds of unrest. The demonstrations will accordingly erode what's left of the regime's legitimacy and lead Iran to lash out against countries that support the protesters.

Then there's the nuclear program. The effort to revive the 2015 Joint Comprehensive Plan of Action and impose time-limited constraints on Iran's nuclear development has failed. The mood in Tehran has shifted decisively against compromise, given the protests and the government's perception that the deal won't deliver enough sure benefits. 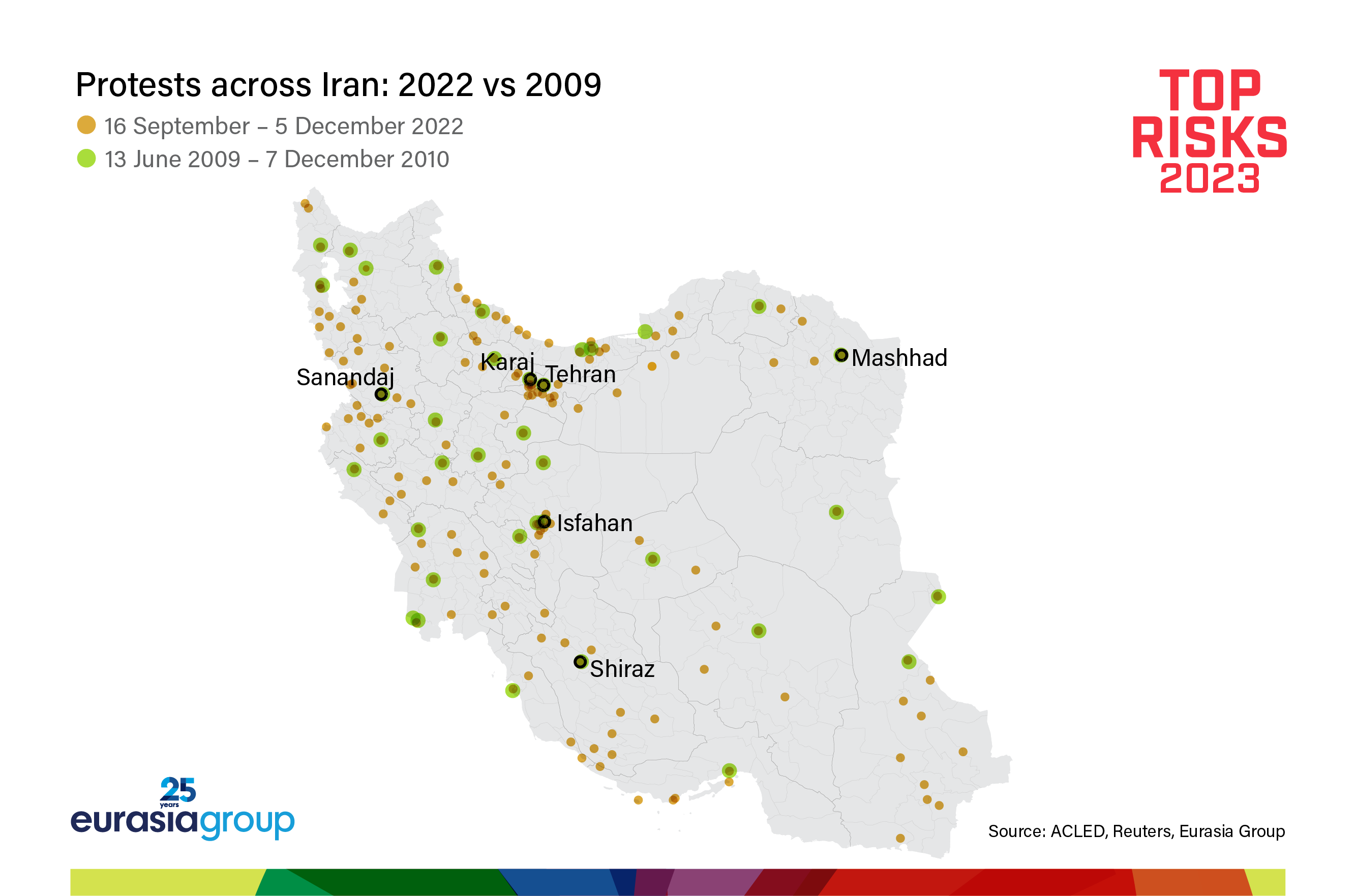 Meanwhile, since Biden took office, Iran's nuclear program has become both more advanced and less monitored. Iran announced in November that it would begin producing near-weapons grade enriched uranium using some of its most advanced centrifuges at a facility buried deep inside a mountain, a site impenetrable to all but the biggest munitions. Iran today can produce enough fissile material for a nuclear weapon in a matter of weeks—the closest it has ever been. That poses threats to both the region and the West.

Iran's material support for Russia's war in Ukraine had added another dimension to its failed relations with the West. Tehran has sold Moscow hundreds of drones used to attack civilians in Ukrainian cities, and it is poised to build a drone production factory in Russia and ship short-range ballistic missiles. Combined with repression at home (supported by Russia), Iran's involvement in a European war has swung public and elite opinion on the continent sharply against the Islamic Republic; it will also lead the United States to impose additional economic sanctions and otherwise disrupt Iran's supply chains, with Europe likely to step up its own measures over human rights concerns and Tehran's military cooperation with Moscow.

These three factors—domestic repression, nuclear advances, and involvement in the Ukraine war—all combine to increase the risk of confrontation with Iran this year.

With a nuclear deal out of reach, the gloves will again come off between Iran and Israel. Israel's new prime minister, Binyamin Netanyahu, has been committed for decades to setting back Iran's nuclear advances. Israel will likely ramp up covert efforts through cyberattacks and sabotage of key nuclear sites and critical infrastructure. For its part, Iran will likely retaliate against Israel with strikes from Syria, Lebanon, Iraq, Yemen, Gaza—and at sea.

Israel, and to a lesser extent the United States, will once again make noisy preparations for an aerial assault on Iran's nuclear sites. The chance of an attack in 2023 remains low, given the risks of a devastating regional conflict, the likelihood that Iran will not take steps that provoke an attack, and the fact that Iran is not actively working on technology that is key to the final stages of a weapon. But in October, when the UN missile ban is set to expire, Western countries will be poised to trigger the snapback of prior UN sanctions, if they haven't done so already by then. Iran would respond in provocative ways, by expelling inspectors or resuming efforts to weaponize, for example. All this significantly elevates the risk of military attack.

Risks to Gulf states will increase as well. Tehran accuses Riyadh of fueling the demonstrations inside Iran, and it could retaliate militarily to both punish Saudi Arabia and distract the domestic population. Even if the 2019 attacks on Saudi oil facilities are not repeated, the risks of missile attacks from Yemen and Iraq are significant. The United Arab Emirates would be vulnerable as well but less so, given its careful efforts to maintain ties with Tehran. But the deployment of Israeli missile defense systems in the UAE in 2022 demonstrated Abu Dhabi's concerns.

Lastly, there will be more questions this year about the stability and longevity of the Islamic Republic. The chance of regime collapse is low, but it's higher than at any point in the past four decades. For most Iranians, the state has lost legitimacy and shows little capacity to reform. The uncertainty rises if Supreme Leader Ali Khamenei, 83, dies or is incapacitated. The leader has no chosen successor, and the succession process has only happened once in the state's history. These problems could create unexpected infighting during the transition and open the door for the Islamic Revolutionary Guard Corps to further expand its influence—shifting Iran closer to a military dictatorship with a more aggressive policy toward the region.