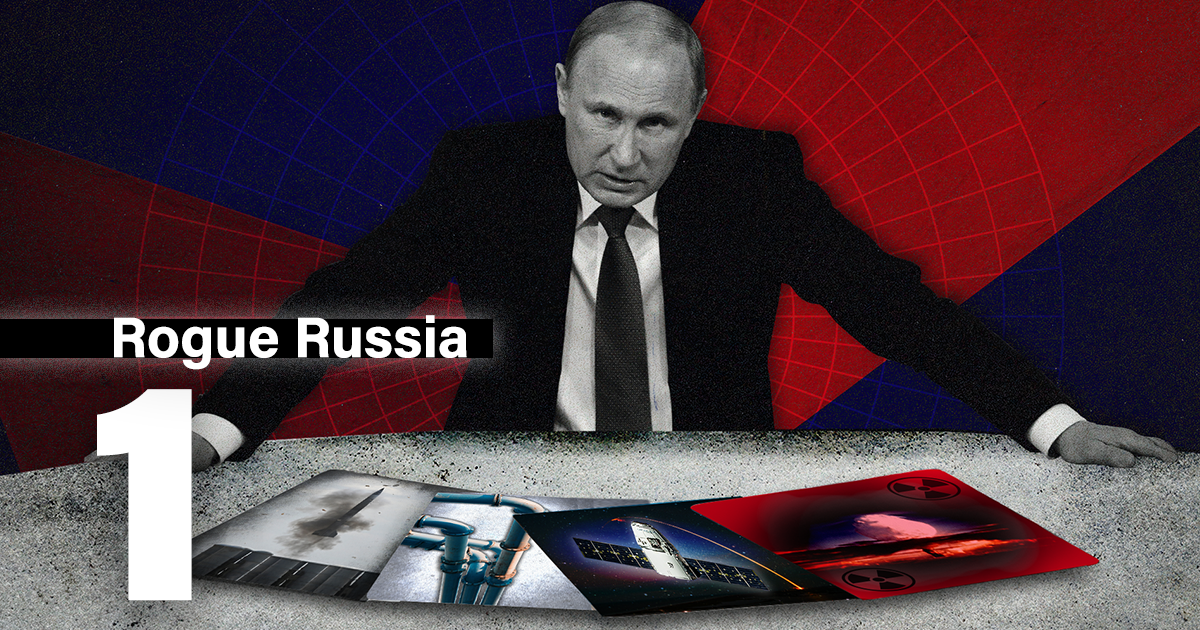 A humiliated Russia will turn from global player into the world's most dangerous rogue state, posing a serious security threat to Europe, the United States, and beyond.

In 2022, despite much bluster directed at the West, the Kremlin was careful to keep its war on Ukraine contained within the country, avoiding direct confrontation with NATO and hoping to divide the united Western front in support of Kyiv. In 2023, Putin can't afford to be that cautious.

Nearly one year since it invaded Ukraine and promised quick victory, Russia has no good remaining military options to win the war. Moscow will continue shelling Ukrainian cities and critical infrastructure, but that won't affect the military balance on the ground. Russia can also launch an offensive with newly mobilized troops this spring, but a lack of training and strong Ukrainian defenses will limit their effectiveness.

Russia also has little leverage left over either the United States or Europe. While it will cut off most remaining gas flows to Europe, increasing European public support for negotiations, this won't prompt a rollback of sanctions (with nine rounds now unanimously approved by all 27 EU member states) or undermine military support for Ukraine (most of which comes from the United States, the United Kingdom, and the most steadfastly anti-Russian EU states).

Russia won't back down. Having raised the war's stakes by mobilizing hundreds of thousands of Russian troops and annexing four Ukrainian regions (much of which they didn't—and don't—actually occupy), Putin remains under intense pressure to, at a minimum, control most of Donetsk, Luhansk, Kherson, and Zaporizhzhia. But Ukrainians will accept only a full Russian withdrawal from all Ukrainian territory, likely including Crimea. Adding to the pressure, Ukraine's now formidable military capabilities might threaten Russia's ability to defend Crimea—a Kremlin red line. 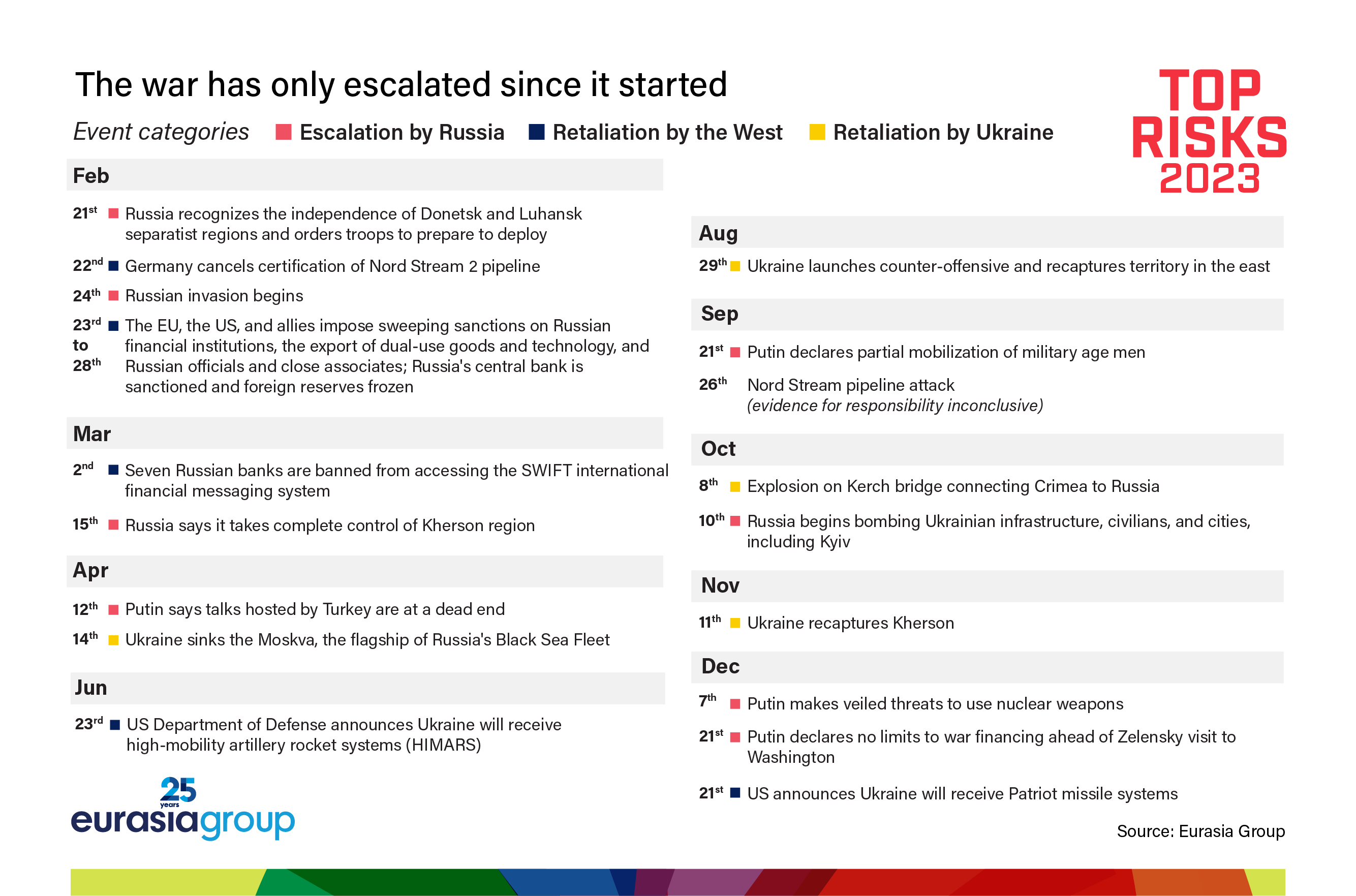 Putin has little left to lose from further escalation against the West and Ukraine, short of actions that risk direct war with NATO. Russia is nearly completely cut off from advanced industrial democracies—economically, diplomatically, culturally, and technologically. And the United States and Europe are already giving Ukraine some of their most advanced military systems; the Patriot missile system headed its way makes this point abundantly clear to the Kremlin. The only deterrent remaining for the West is direct war against the world's largest nuclear power—something Putin knows the West won't gamble on.

Defeated on the battlefield in Ukraine, increasingly staggered by sanctions, left without leverage over the EU or the United States, with little to lose from further isolation and Western retaliation, and facing intense domestic pressure to show strength, Russia will turn to asymmetric warfare against the West to inflict damage and weaken NATO unity, rather than employ overt aggression that depends on military and/or economic power that Russia no longer has.

Rogue Russia will increasingly act like a global version of its now-closest remaining ally of consequence, Iran. Before Russia's fall from grace, Iran had been the world's most powerful rogue state, itself effectively “decoupled” from the international community. Accordingly, Tehran has long pursued a revisionist foreign policy in the Middle East via asymmetric means, including espionage, drone and missile strikes, support for terrorism, proxy wars, and the like. Russia will likewise intensify its efforts to destabilize the United States and Europe—but with greater asymmetric security capabilities than Iran, and with the world's biggest nuclear arsenal as the ultimate cover to deter Western retaliation.

Nuclear saber-rattling by Moscow will intensify. Putin's threats will become more explicit; he's likely to move tactical nuclear weapons closer to Ukraine—and publicize it—and we could see an increase in the alert status of Russia's nuclear arsenal. Russia will calibrate its nuclear threats, and direct nuclear use remains unlikely; Putin is as Armageddon-averse as Iran's supreme leader. But the risk is clear: Nuclear signaling is easier said than done, and the potential for mutually assured destruction because of accidents and miscalculation will be higher in 2023 than at any time since the Cuban missile crisis in 1962. And unlike the height of the Cold War, Putin has no way to climb down or return to a pre-war status quo.

Kremlin-affiliated hackers will ramp up cyberattacks on Western firms and governments. Pipelines, as well as LNG terminals, will be attractive targets for Russian sabotage. Russian officials have credibly threatened retaliation against American and European satellites that play a role in the war. Fiber is vulnerable too: Cables in Europe and under the Atlantic will be targets, probably in a fingerprint-free way as with the Nord Stream pipeline attack in September (where there's still no evidence of responsibility).

Russia will also intensify its offensive against Western elections by supporting and funding disinformation and extremism. The US presidential campaign will quickly ramp up this year, and Trump is all-in with an anti-war plank that's music to Putin's ears. Disruptive disinformation against Republican challengers to Trump and potential Democratic nominees, including President Joe Biden, will begin early. Moscow will also stir trouble in the Balkans, as a ploy to distract NATO from Ukraine.

Ukraine will also face new risks. Russia can't retake much Ukrainian territory, but it can inflict much more suffering on the Ukrainian people. It will continue to pound Ukrainian critical infrastructure, including with newly obtained Iranian ballistic missiles (please see risk #5). It may try harder to decapitate the Ukrainian government, possibly with assassination attempts against Ukrainian President Volodymyr Zelensky and other senior officials. Finally, Moscow will try to make a rump Ukraine economically unviable at a time when Kyiv faces an uphill struggle to fund the country's reconstruction. That will likely include new stoppages of grain exports, with efforts to blame Ukraine and the West for global food insecurity that exacerbates frictions between the West and developing countries. These moves will in turn lead to growing European calls to seize frozen Russian assets and use them for Ukrainian reconstruction.

Several actions remain off-limits, even for a rogue Russia. Major attacks on Western critical infrastructure that can be quickly and clearly traced to the Russian government remain unlikely, at least unless the Ukrainian military achieves another major breakthrough on the ground. So are targeted assassinations of Western leaders and missile or drone strikes on NATO territory. Moscow has so far avoided waging a major cyber conflict with the United States for fear it might lose that war too. That will probably remain the case in 2023.

There is a silver lining: Just like Iran's rogue behavior has created a new alignment among Gulf nations, the United States, and Israel (most dramatically, but not limited to the Abraham Accords), Russia's rogue behavior will create ongoing opportunities for the G7 to strengthen cooperation among advanced industrial democracies and rebuild institutions for a stronger global security order. That said, a rogue Russia represents a geopolitical crisis of the highest order. It's a threat to global security, Western political systems, the cybersphere, space, and food security … not to mention every Ukrainian civilian.