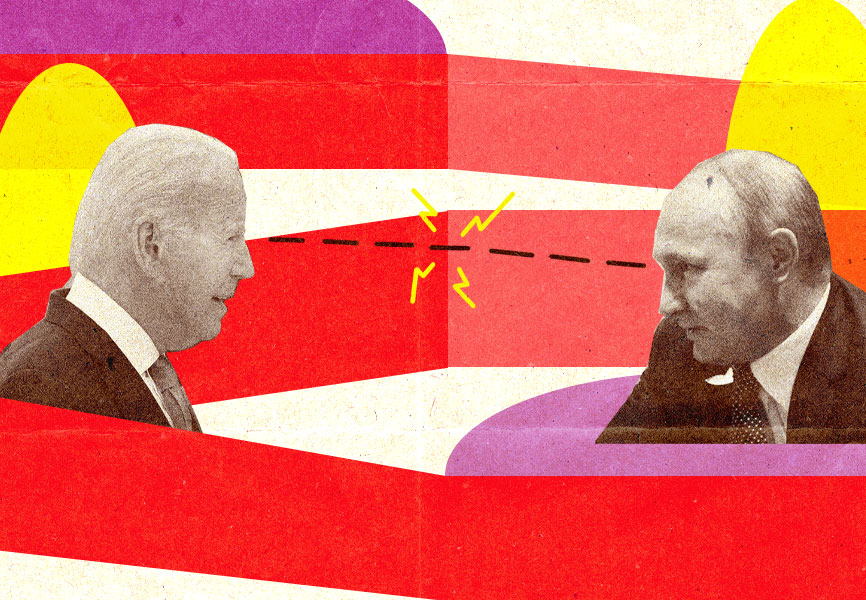 Relations between the US and Russia are on a knife-edge. What started with an incremental buildup of troops near Ukraine last year has morphed into a broader Russian demand to restructure the European security architecture. That, combined with ongoing concerns about election interference and cyber operations, means that Russia is on the verge of precipitating an international crisis.

President Vladimir Putin is trying to force the West to address Russian objections to the eastward expansion of NATO. He amassed at least 70,000 troops on the border with Ukraine to gain leverage on two issues: the nature of an agreement with Kyiv and the rules of the game on Russia's relations with its western neighbors. Putin has put his credibility on the line; if he doesn't get concessions from the US-led West, he is likely to act, either with some form of military operation in Ukraine or a dramatic action elsewhere.

Diplomacy will probably avert military confrontation by focusing on areas where compromise is possible. Ukraine has no prospect of getting into NATO, but the United States and its NATO allies aren't going to say that publicly. Yet the sides could reach a tacit agreement to that effect. Agreement is also possible on other issues including limits on weapons transfers to Ukraine and on military exercises near the Russian border.

But it's a very close call. Even if issues such as these are agreed on it may not be enough to satisfy Putin. If Putin directly invades Ukraine, Russia will at the least face a ban on US persons trading in the secondary market for new Russian sovereign debt, and NATO forces will move their forward positions closer to Russia's border, raising tensions to a degree not seen since the collapse of the Soviet Union.

Putin has other, less dramatic options that would also pose big problems for the transatlantic alliance. In response to his (false) claims that Ukraine is conducting acts of genocide against ethnic Russians in the Donbas, he could send troops into the occupied territory and formally annex it in order to protect them, potentially taking a small additional buffer of Ukrainian territory as well. Would the Europeans remain as aligned with the United States in such a scenario, with all the economic consequences (and energy shortages this winter) that would result? It's harder to imagine. Absent this alignment, the episode would be an embarrassing failure for the Biden administration and deeply divisive for US-Europe relations. 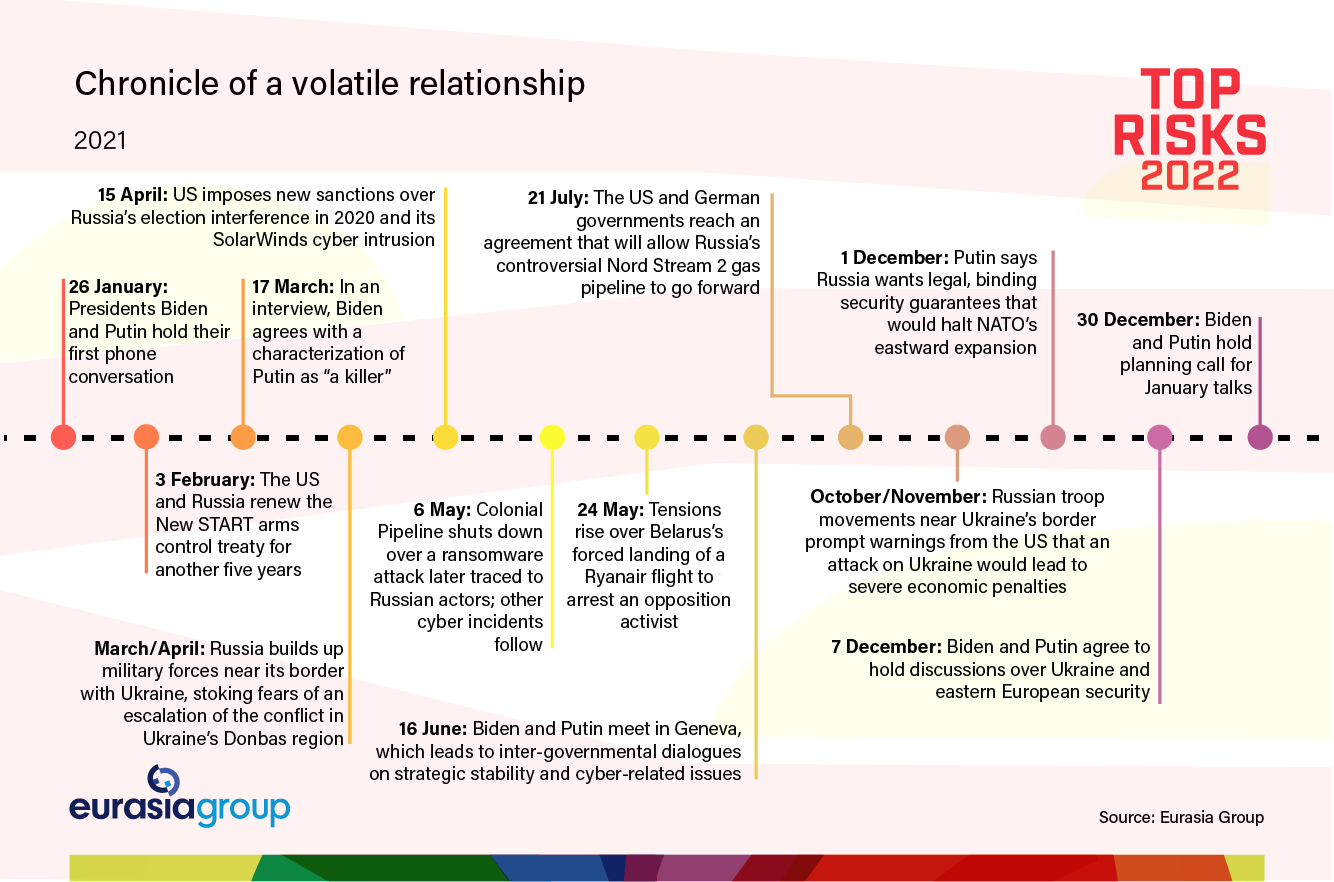 Another Russia-related risk pertains to the US midterms. As Risk #3 argues, there is a direct line between the midterms and the 2024 presidential race, including the potential for a broken or stolen election. Russian actors will interfere in the midterms at a low level, with troll farms of fake accounts spreading misinformation and state media highlighting hot-button issues in the US. This activity would fuel further American distrust in the democratic process ahead of 2024, though it would not cross the line and trigger severe US sanctions.  Yet, Moscow may find the US midterms an irresistible opportunity to sow greater discord in a deeply divided superpower (especially if the broader European security issue hasn't been “resolved” to Russian satisfaction). This could lead to more direct involvement by the Russian security services in spreading misinformation or hacking and releasing information from candidates or officials. Many members of Congress, including Biden's allies, are already on edge, and some are openly frustrated by Biden's refusal to levy heavier sanctions in response to past election interference. Congressional pressure could prompt new sanctions, and it will take less Russian provocation than in the past to get the White House on board. A ban on secondary market trading of Russian debt could also be triggered by election interference.

Russian cyber operations will elevate the overall tension in relations with Washington. Policymakers and the media have trouble distinguishing between routine espionage and actions that are more malicious; the former will continue unabated, and the risk of the latter remains real. If the Russian government or a loosely aligned non-state actor damaged critical infrastructure, it would provoke a strong US response, risking a cyber war with extensive economic damage. The drumbeat of incursions—combined with hacks and counter-hacks from the US—will raise the overall temperature in the relationship.

Lingering in the background is the investigation into the “Havana syndrome,” the unexplained illnesses experienced by some 200 US government personnel around the world. The evidence surrounding the syndrome and any Russian culpability remains murky, but it continues to burden the relationship. If Moscow is ultimately found to be responsible, the consequences will be severe.

Finally, Russia's close relationship with China will become a growing cause for US concern. Putin is more confident believing that he has Beijing on his side; Moscow will amplify its standing policy of lashing out against the US and US-led alliances in the Indo-Pacific and elsewhere. A blowup of the situation in Ukraine is likely to be accompanied by China vetoes favoring Moscow in the UN Security Council at a minimum, but possibly with more provocative Chinese military maneuvers in the South China Sea as well. A “rogue” Russia is no longer operating in isolation.