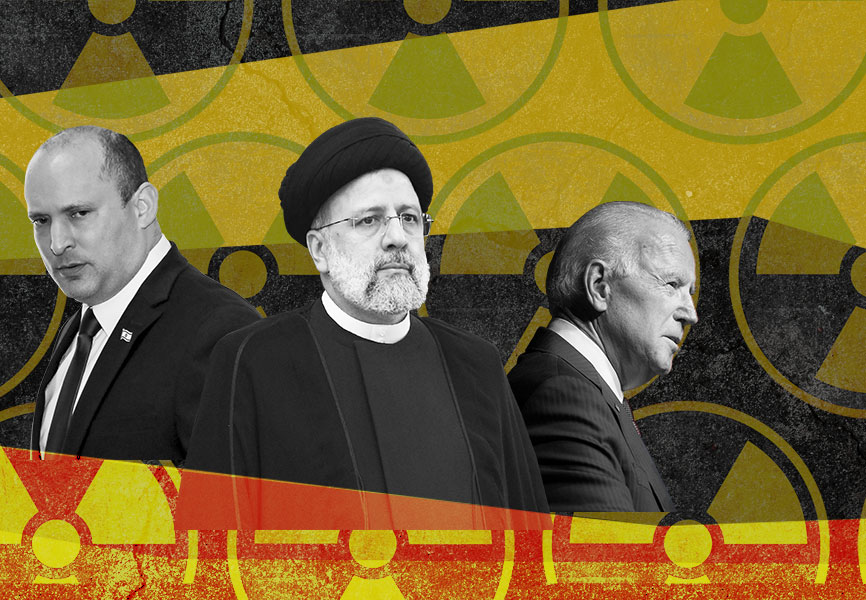 The US and Iran enter 2022 on the brink of crisis. Iran's nuclear program is advancing rapidly, unconstrained by the limits of the nuclear accord. With diplomacy on ice, Washington is groping for an alternative strategy to constrain Tehran and placate growing Israeli calls for aggressive action, but the Biden administration has limited options. Israel will increasingly take matters into its own hands—which once again raises the specter of Israeli strikes on Iranian nuclear facilities. These pressures will collide this year, leaving oil prices and regional states jittery and increasing the risk of conflict.

Iran's hardline president, Ebrahim Raisi, entered office with a chance to seal a quick deal with Washington, accept short-term nuclear constraints, and rebuild Iran's economy. He chose the opposite path. He appointed an ardent opponent of the nuclear accord as his chief negotiator and is building nuclear capabilities that cannot be undone. Iran's “breakout time”—the time required to produce enough highly enriched uranium for a nuclear bomb—is now down to one month. While Tehran has said it still wants a deal, its actions suggest otherwise.

This has left Washington in the lurch. The Biden administration, which expected to reach an agreement with Tehran last year, failed to plan for a scenario in which Tehran wasn't interested. With the chaotic US withdrawal from Afghanistan and ongoing pivot to Asia, the US is aiming to reduce its footprint in the Middle East. That has emboldened Tehran and alarmed Israeli leaders, who view an Iranian nuclear weapon as an existential threat.

With hopes for reviving the 2015 nuclear deal fading, Tehran will race to make technical advances that bring it closer to a bomb in order to pressure the West to make concessions. Iran will accumulate more highly enriched uranium, deploy more advanced centrifuges, and further test techniques for turning uranium into metal that can be used for a bomb. Many of these steps cannot be reversed, establishing a new and more dangerous baseline for future negotiations. Iran will also continue to obstruct international monitoring of its program, fueling further international concern about whether it has resumed its covert effort to build a deliverable nuclear weapon.

The United States will struggle to pivot to a new Iran policy. Washington will apply new sanctions, but there is little more Biden can add to Trump's “maximum pressure” sanctions. Iran's economy will worsen under the weight of existing sanctions, but no single US step will push it over the edge (particularly with comparatively high energy prices at present). Economic pressure and political isolation may eventually put real pressure on Iran but won't alone force political action this year. And Biden will be reluctant to intensify military pressure on Iran, in contrast to the Trump administration (or even that of Barack Obama). 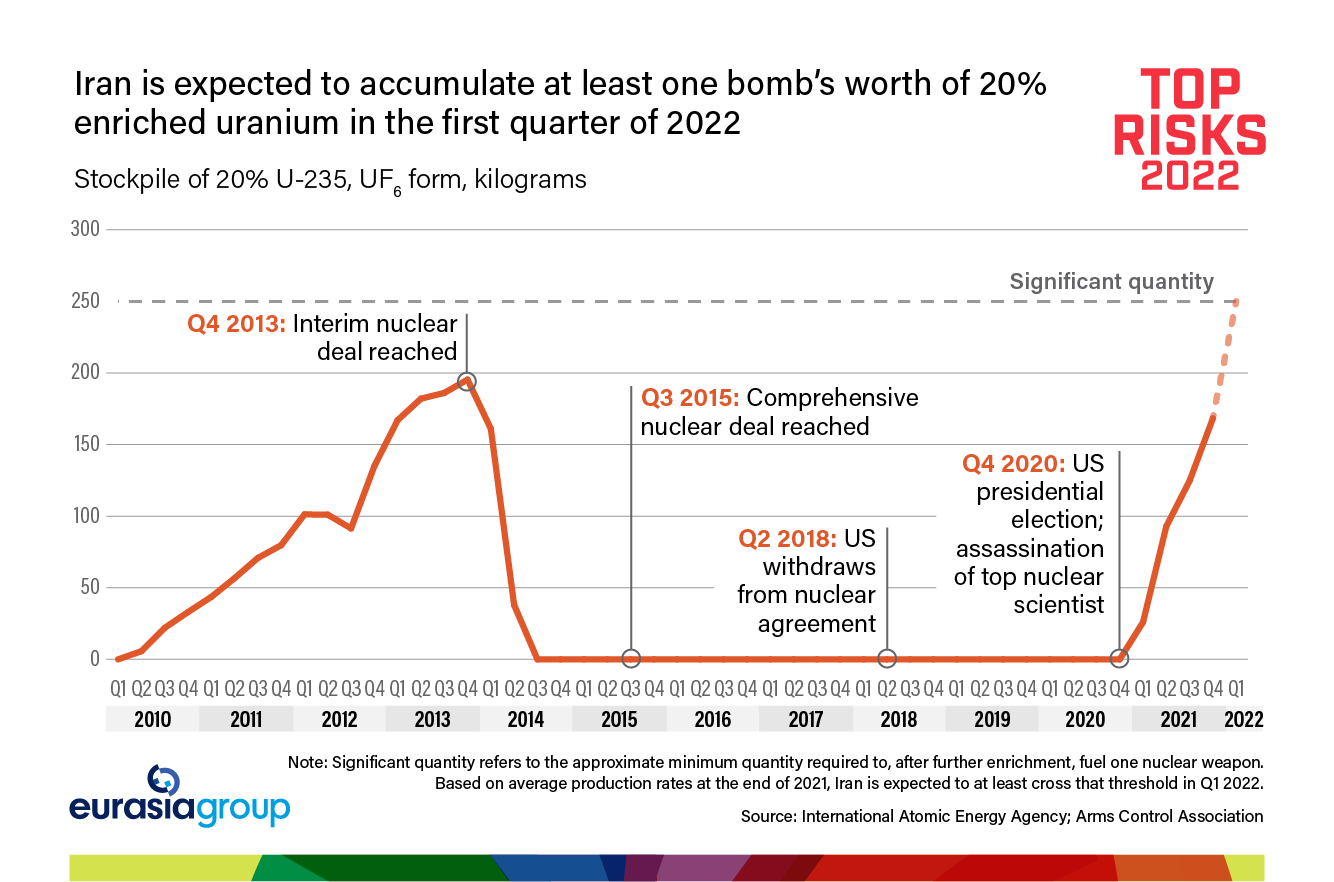 Israel has no such reluctance, and that's what makes the 2022 escalation most dangerous. Washington's hesitations will persuade Israel that the Biden administration lacks the political will to build up its military option and therefore Jerusalem will feel compelled to pursue its own strategy. That means more Israeli sabotage attacks and potentially even direct military strikes on key Iranian defense and civilian sites, which will provoke Iranian retaliation, including from Syria and Lebanon, at sea, and in cyberspace. Tehran may well respond to Israeli attacks with retaliation against American targets, putting Iraq in the crosshairs next year and risking a broader regional war. Clashes in the Gulf are less likely, given Gulf states' growing interest in engaging directly with Iran and Iran's economic incentives to maintain good ties with its neighbors.

Oil markets will feel upward pressure as tensions rise. The shadow war will spook shippers, insurers, airlines, and corporates with a physical presence in the Middle East, given the vulnerabilities of civilian infrastructure. Threats of Israeli airstrikes will do the same. New US sanctions may not have a big impact on Iran, but they will add compliance burdens for firms and banks.

Last year was a calm one for Iran. This year, as everybody pursues their own Plan B, will be anything but.

40% chance of 2020 US-Iran military conflict: Eurasia CEO
SUBSCRIBE TO GZERO DAILY
Sign up now for GZERO Daily, the newsletter for anyone interested in global politics, published by GZERO Media.