Eurasia Group | Social tensions flare in Brazil ahead of election

Social tensions flare in Brazil ahead of election 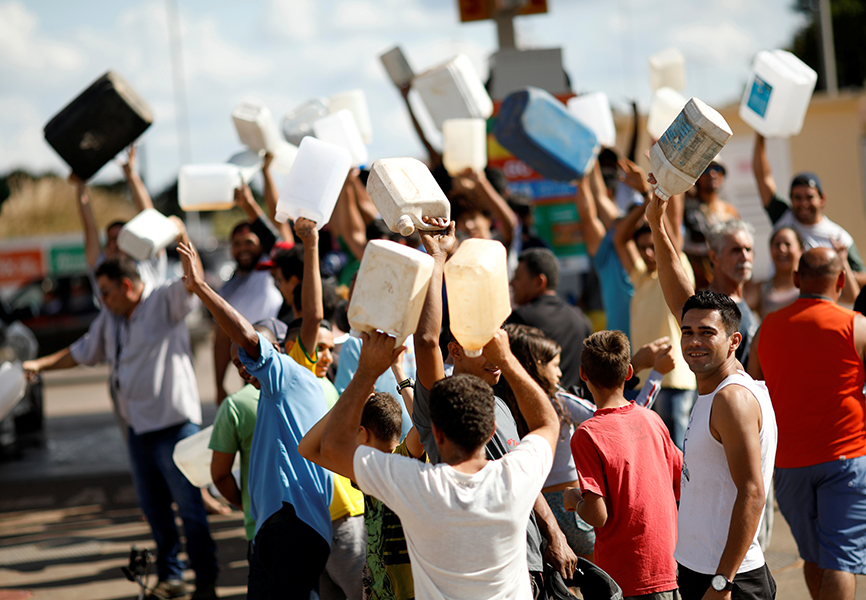 People raise empty gasoline containers in front of a gas station in Brasilia, Brazil on 25 May. REUTERS/Ueslei Marcelino.
An 11-day truckers' strike has ushered in a period of heightened unrest ahead of Brazil's October presidential election.
The protest that caused crippling shortages of fuel and food across Latin America's largest country is officially over, though it will take days before life is back to normal. Factories, stores, and farms are tallying their losses. Oil workers followed the truckers' lead, also calling a work stoppage this week, though that too is now winding down. But other groups are expected to take advantage of President Michel Temer's weak position and start coming forward with demands of their own in the months ahead.
The specter of potential social unrest has been hovering over Brazil for months. It is a country with a long tradition of street protests—millions demonstrated in 2013 to demand better public services—and discontent is at historically high levels. Polls show voters are much angrier now than they were five years ago, a newly ascendant middle class is frustrated with a culture of endemic corruption, and the economy is still digging out from a deep recession.
Rising diesel fuel prices provided the spark for the trucker strike, which gained widespread support from the population. Temer and congressional leaders, under fire for failing to anticipate the consequences of the stoppage, were forced to make two rounds of concessions, agreeing to pay out billions of reais in subsidies. When Temer addressed the nation Sunday evening on television, he was greeted with jeers and pot-banging in many cities.
The higher level of social turbulence will make it harder for the government to advance its agenda of reforms to improve country's business climate and could damage the country's incipient economic recovery. Moreover, rising public frustration is giving a boost to antiestablishment presidential candidates promising to put an end to corruption and economic mismanagement.
One candidate in particular seems to be benefiting: far-right lawmaker Jair Bolsonaro. Though he has offended many over the years with his crude remarks about women, blacks, and gays, he is now seen by a segment of the electorate as a strong leader who can change the way politics are done in Brasilia. And he publicly supported the truckers in their demands.
The rise of these outsider candidates, however, does not bode well for the measures needed to put Brazil's finances and fragile economic recovery on a more stable footing. Chief among these is an overhaul of the overly generous pension system that is at the heart of a budget deficit that ballooned to 10% of GDP in 2015, before edging back to 8% last year. This will be an unpopular reform, and the candidates appealing to the wave of anti-establishment sentiment either come from small parties, with little sway in congress, or have expressed scant inclination to tackle budget challenges.

To be sure, with four months to go, the election remains wide open; an important wildcard is what candidate the left-wing Workers' Party eventually settles on. But in a scenario in which authorities make only modest advances to address the country's financial and economic problems and citizens remain dissatisfied with public services, the rocky relationship between government and voters seems likely to persist in the coming years, or even worsen. The next president will probably have a short honeymoon, and new waves of protests could be just around the corner.