Emerging markets underwent a historic cycle of national elections in 2014– 2015, but this year there are relatively few opportunities for voters in these countries to make themselves heard at the ballot box. As slower growth and stagnating living standards stoke popular discontent, governance and stability will suffer. Of the larger emerging market democracies, only the Philippines and Peru will change heads of state in 2016. Russia's legislative elections will have little bearing on an overwhelmingly presidential system. Brazil and South Africa will hold only municipal elections.

Historically, markets have been less volatile in non-election years, but this time will be different. By raising popular expectations, the massive income growth that most emerging markets enjoyed over the past ten years has created conditions for a rude awakening. Economic trajectories won't live up to political promises. More than half of Latin Americans recently surveyed, for example, believe that their standards of living will continue to rise as fast as they have in recent years. Slower growth will make this impossible. At the same time, popular frustrations with corruption, spotty public services, and obsolete infrastructure are all growing, as protests in Brazil, Turkey, Chile, and Russia have shown over the past few years. The conspicuous absence of national-level electoral relief valves raises the risk of instability and dysfunctional governance.

The first risk is the increased likelihood of street protests in Brazil, South Africa, and other emerging markets. Around the world, broader access to social media has made it easier for ordinary people to articulate grievances and act upon them. This isn't just true of emerging market middle classes, whose dramatic expansion over the past decade has fueled growing demands for quality healthcare, education, and infrastructure. It's also become true of historically marginalized groups such as rural communities organizing against natural resource exploitation, ethnic or religious minorities demanding fairer treatment, or the urban poor agitating for basic social support. The risk of protests is high in large emerging markets such as Brazil, where the Car Wash corruption scandal is exacerbating an economic meltdown that is driving up unemployment, or South Africa, where rising frustration with the incompetence and corruption of the African National Congress at the national level could stoke tensions around local elections this summer. Disillusionment with President Joko Widodo in Indonesia could become more pronounced as his reform promises get ever further bogged down, and the risks of a return to instability in Thailand remain real, particularly given the fragile health of the king.

The second risk is that disillusioned middle and working class voters will fuel the rise of non-mainstream parties with more reactionary agendas and force established political players to swerve in an effort to avoid political irrelevance. Middle classes are often thought of as forces for greater transparency and better governance. This is often true on their way up, but almost never on their way down. History shows that the fear of losing socio-political status is a fertile ground for reactionary reflexes. While a shortage of elections will limit the opportunity for populist voices to step into formal leadership roles, their agitation will further reduce incumbents' incentives to undertake the politically costly reforms that many emerging markets need. This trend has already begun to play out in the emerging market economies of central and eastern Europe and will likely deepen in 2016.

The soapbox is already competing with the ballot box across many parts of the developed world, leading to political results inconceivable just a few years ago. The danger comes when the same phenomenon takes off in emerging markets, whose weaker institutional resilience exposes them to more treacherous outcomes. 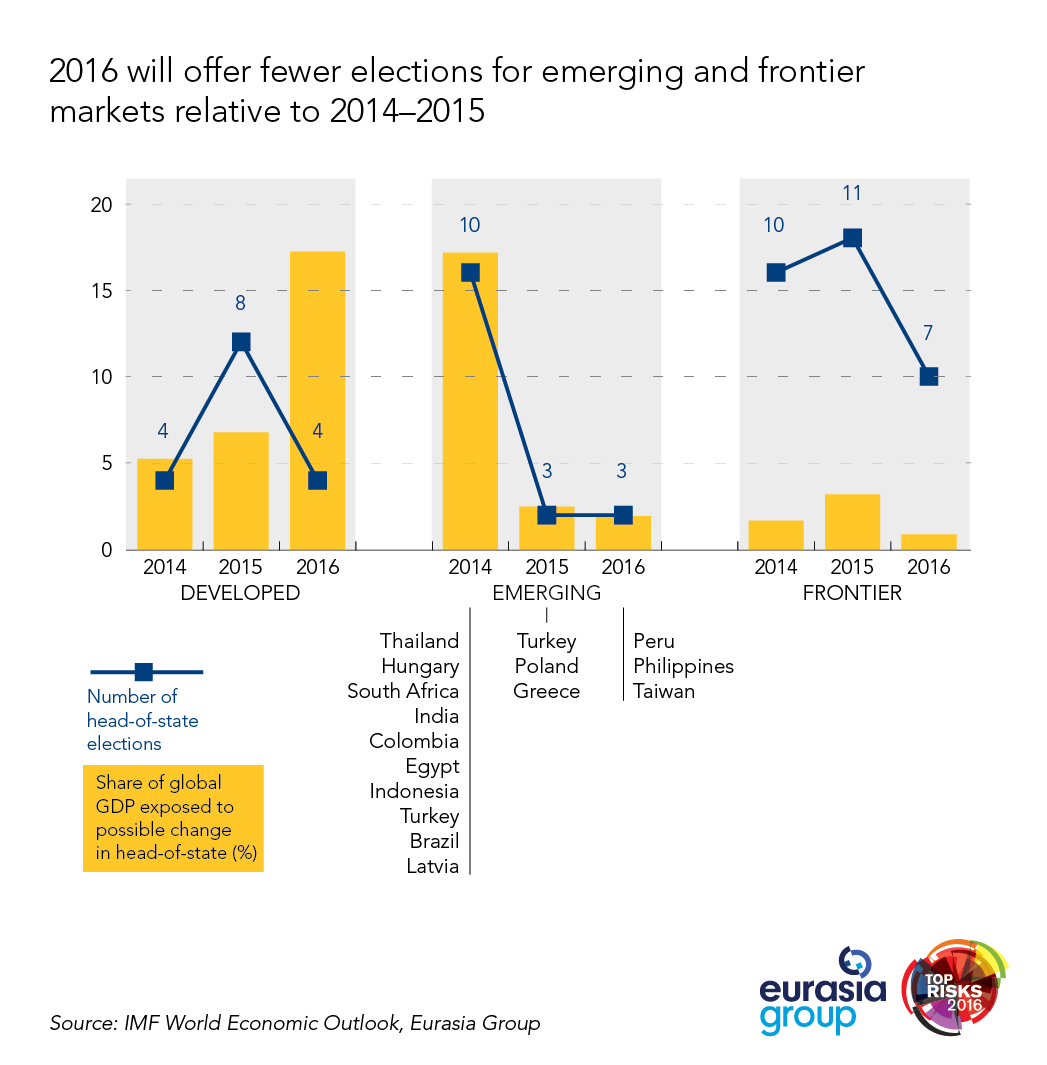