After a decisive victory for his Justice and Development Party (AKP) in late 2015 general elections, Erdogan will now work to replace the country's parliamentary system with a presidential one. Though the president is unlikely to reach his goal within the year, his electioneering in pursuit of this ambition will further worsen an already battered Turkish political, business, and investment climate.

Emboldened by his victory, Erdogan will continue to push the boundaries of Turkey's constitution by centralizing decision-making in his office. That will create strains in the Turkish body politic. It will dash all short-term hopes of an independent—and more moderate—power center led by Prime Minister Ahmet Davutoglu. Looking to enshrine his incremental power grabs, Erdogan will push increasingly loudly for a constitutional amendment. But attempts to secure the support of the 14-plus parliamentarians, which the president needs for a referendum on the issue, will exacerbate divisions within Turkish society, between political parties, and inside the AKP.

Meanwhile, the government's focus on currying favor with voters through economic populism will undermine attempts to address the country's structural economic vulnerabilities. The replacement of reform-oriented heavyweight Ali Babacan with the technically savvy but politically weak Mehmet Simsek as economic coordinator will give the upper hand to the numerous Erdogan loyalists who now populate the cabinet. Political pressures for a loose monetary policy will remain strong and will benefit from the likely replacement of central bank governor Erdem Basci with a more docile figure in April. Despite the announcement of impending structural reforms aimed at reassuring investors, policies focused on stimulating short-term growth through fiscal laxity will dominate the political agenda. The country's general business environment and rule of law will also suffer as Erdogan continues to crack down on domestic opponents in the media, business community, and bureaucracy, while the president's political allies will continue to capture most of the country's economic opportunities and enshrine rent-seeking as a dominant mentality.

The country's foreign policy will be infused with nationalism aimed at catering to Turks' increasingly conservative views in an attempt to bolster the president's referendum agenda. Erdogan's frustration with finding himself on the losing side of the Syrian conflict will lead him to pursue a more erratic course, projecting Turkey as the patron of Sunnis in Syria and Iraq and undermining Ankara's diplomatic ties with Baghdad and Tehran. While Turkish-Russian tensions are unlikely to escalate into open military conflict, the relationship will fail to normalize, and Russian sanctions will continue to hurt the Turkish economy at the margins. Finally, the promise of improvements in Turkey's relationship with the EU will bolster the president's domestic image as an international leader, but it will not lead to a significantly more constructive policy on the migrant issue.

On the security front, there is little prospect of an imminent end to Kurdistan Workers' Party (PKK) violence as Erdogan seeks to gain the political upper hand through military action and the PKK's youth wing brings unprecedented violence to the conflict. At the same time, unrelenting US pressure on Ankara to clamp down on the Islamic State will produce only modest results but make Turkey more vulnerable at home to new attacks by ISIS. Sorry, Turkey. 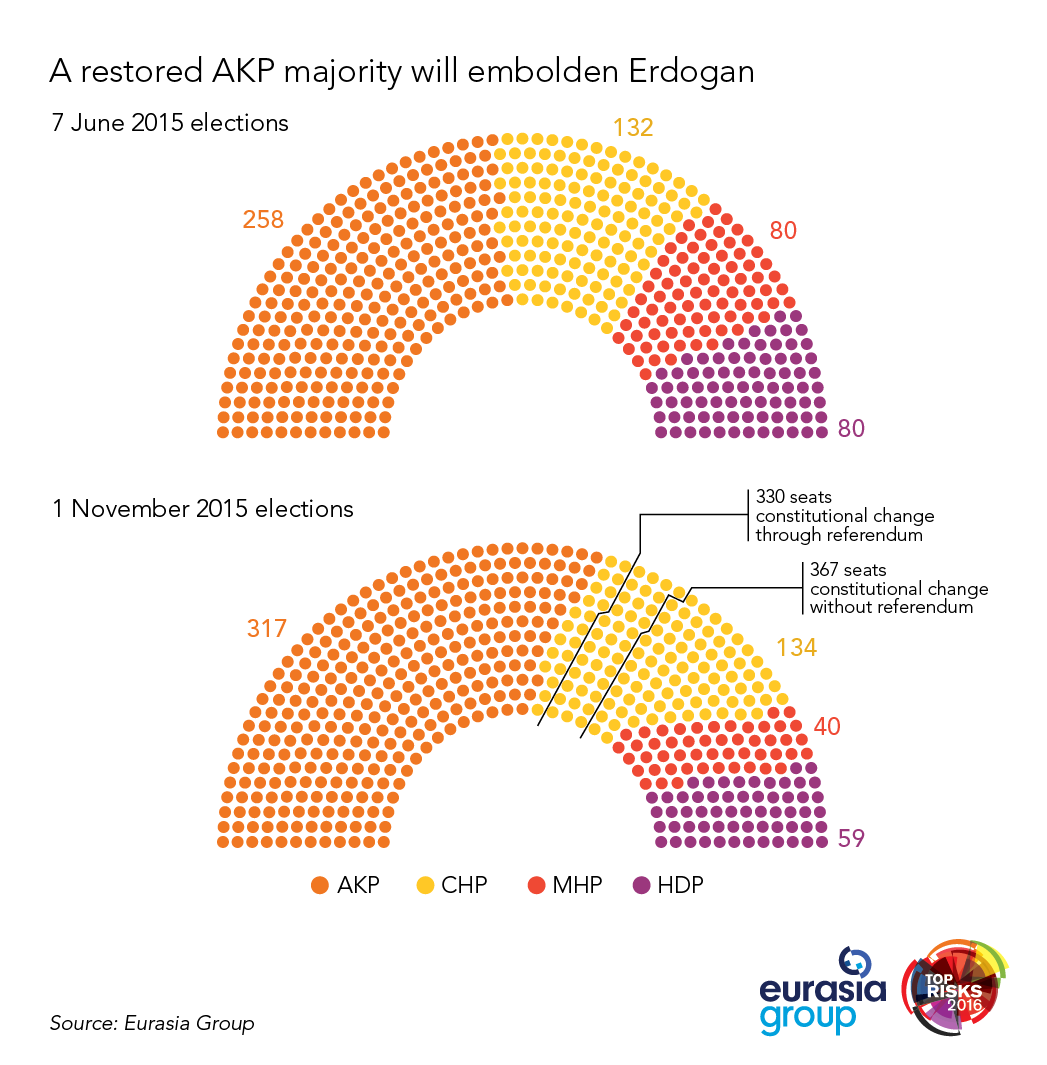