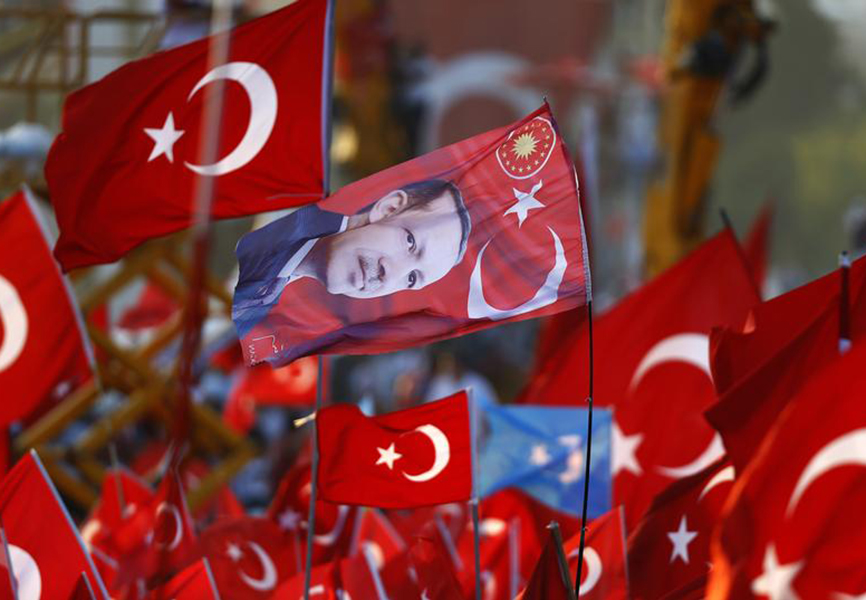 A flag with the picture of Turkey's President Tayyip Erdogan is seen during the Democracy and Martyrs Rally, organized by him and supported by ruling AK Party (AKP), and the opposition Republican People's Party (CHP) and Nationalist Movement Party (MHP), to protest against last month's failed military coup attempt, in Istanbul, Turkey, August 7, 2016. REUTERS/Osman Orsal

LAST JULY'S FAILED COUP has introduced greater political uncertainty and economic volatility in Turkey, as Erdogan continues to use the ongoing state of emergency to seize control of day-to-day affairs and tighten his hold on the judiciary, bureaucracy, media, and even business sector through waves of arrests and purges. Erdogan is now looking to legitimize his de facto expansion of powers, and with the help of the opposition Nationalist Movement Party (MHP), Turkey is likely to hold a referendum on that question this spring. Unlike other referenda on the continent, the vote should be a win for the increasingly authoritarian president. Erdogan's drive to centralize powers will exacerbate many of the existing pressures on Turkey's domestic governance, economy, and foreign relations.

Voters are close to evenly split on the question of expanding the president's powers, and Erdogan will have to mount an aggressive campaign to win. On the political front, that means the government will continue its witch-hunt against “Gulenists,” and tighten its already strict control over government institutions and the media. On the economic front, Erdogan will face pressure to sustain populist, pro-growth measures at a time when tightening external liquidity conditions demand a rethink of economic policy. He'll press the central bank to keep rates low and rely increasingly on fiscal stimulus to offset slowing growth. Erdogan will avoid sorely needed structural reforms of taxes, labor, and pensions.

Ever-fewer checks on executive power will leave the private sector vulnerable to political whims, particularly given a politically compromised judiciary.

Erdogan's need to keep the support of nationalist voters will also increase security risks at a time when the military remains weakened by post-coup purges. He'll continue his hard-line stance on the Kurdistan Workers' Party—ruling out a return to viable peace talks—and its affiliates in Iraq and Syria. In both those countries, Erdogan is likely to overreach and alienate allies. And his hard line will stoke terrorism in Turkey. Similarly, while the EU-Turkey refugee deal is more likely than not to hold, Erdogan's repressive policies will keep his relationship with European partners on a ledge.

Finally, Erdogan's referendum victory is unlikely to offer much relief. The nationalist MHP has signed off on a reform package that includes almost every provision Erdogan wants for an unchecked executive presidential system. Yet, though most of these provisions won't go into effect until the next election in 2019, victory will embolden Erdogan to act as a de facto executive president and continue to overstep his formal powers throughout 2017. An empowered, post-referendum Erdogan will double down on his preferred policies, aggravating political, economic, and security risks. 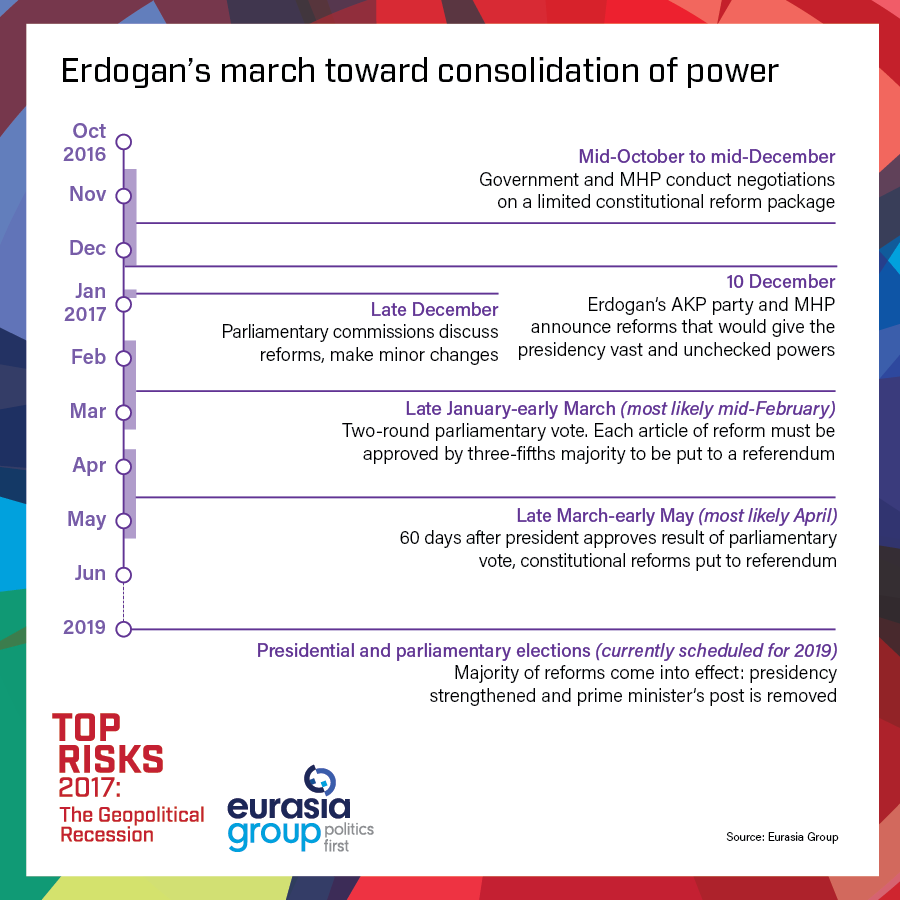