Brazil is in the midst of a deep, multi-year recession, and President Dilma Rousseff is fighting for her political survival as she faces a motion of impeachment in congress.

As much as the Brazilian stock market and currency have suffered in 2015, the country's political and economic crisis is set to worsen over the course of 2016. Contrary to hopes among pundits and many market players, the battle over Rousseff's impeachment early this year is unlikely to end the current political stalemate.

Should the president survive, which still seems likely, her government won't gain the political boost necessary to move on the economic reforms that are critical to tackling the country's growing fiscal deficit. To ensure the support she needs in congress to stave off an impeachment, Rousseff will have to make concessions to her leftist base. Those overtures will weaken her fiscal agenda and explain the decision to replace her orthodox finance minister Joaquim Levy with the less fiscally hawkish Nelson Barbosa. Meanwhile, Vice President Michel Temer has mobilized a large segment of his Brazilian Democratic Movement Party (PMDB) in opposition to Rousseff, a division that will endure long after the impeachment question is settled.

Finally, the president will remain vulnerable to the sprawling “Car Wash” corruption probe into state-owned energy giant Petrobras and associated illicit political financing. This will shed light on new evidence of wrongdoing within her Workers' Party (PT) that could lead to new petitions for her impeachment. Rousseff's fortunes will fall even more quickly if her mentor and former president Luíz Inácio Lula da Silva feels the heat of these investigations and turns against Rousseff's politically contentious reform agenda. If Rousseff continues in office, she'll be a president increasingly captive to the radical elements of her party and hamstrung by an ever more antagonistic congress, leading to policy paralysis.

In the alternative (and less likely) scenario that Rousseff is ousted, an administration led by Temer won't fare much better. To be sure, a new government would benefit from an initial wave of optimism in the private sector. The newly empowered president would call for a national unity government, count on at least tacit support from the right-leaning opposition Social Democratic Party (PSDB), and propose structural economic reforms.

But Temer's liabilities would outweigh the upsides of his taking office. First, scrutiny by Car Wash investigators of the PMDB will grow, implicating members of his new administration and diminishing the incentives for the PSDB to continue lending him their already tepid support.

Second, Temer will have to contend with a PT party by then staunchly in the opposition that is both eager to make him pay for Rousseff's downfall and express its discontent with his “neo-liberal” agenda. With unemployment rising to double digits over the course of the year, the new president's political room for maneuver would be sharply limited.

Paradoxically, the cleanest way out of the current political crisis rests in the hands of an apolitical body: the Federal Electoral Tribunal, which will be evaluating a case of fraud in the 2014 presidential election. Should the court find evidence of illicit campaign funding, it can call new elections within 90 days. While unlikely, such an outcome would have the benefit of bringing about a freshly elected president armed with newfound political legitimacy. But we're not betting on it. 2016 will be characterized by deepening crisis in Brazil. 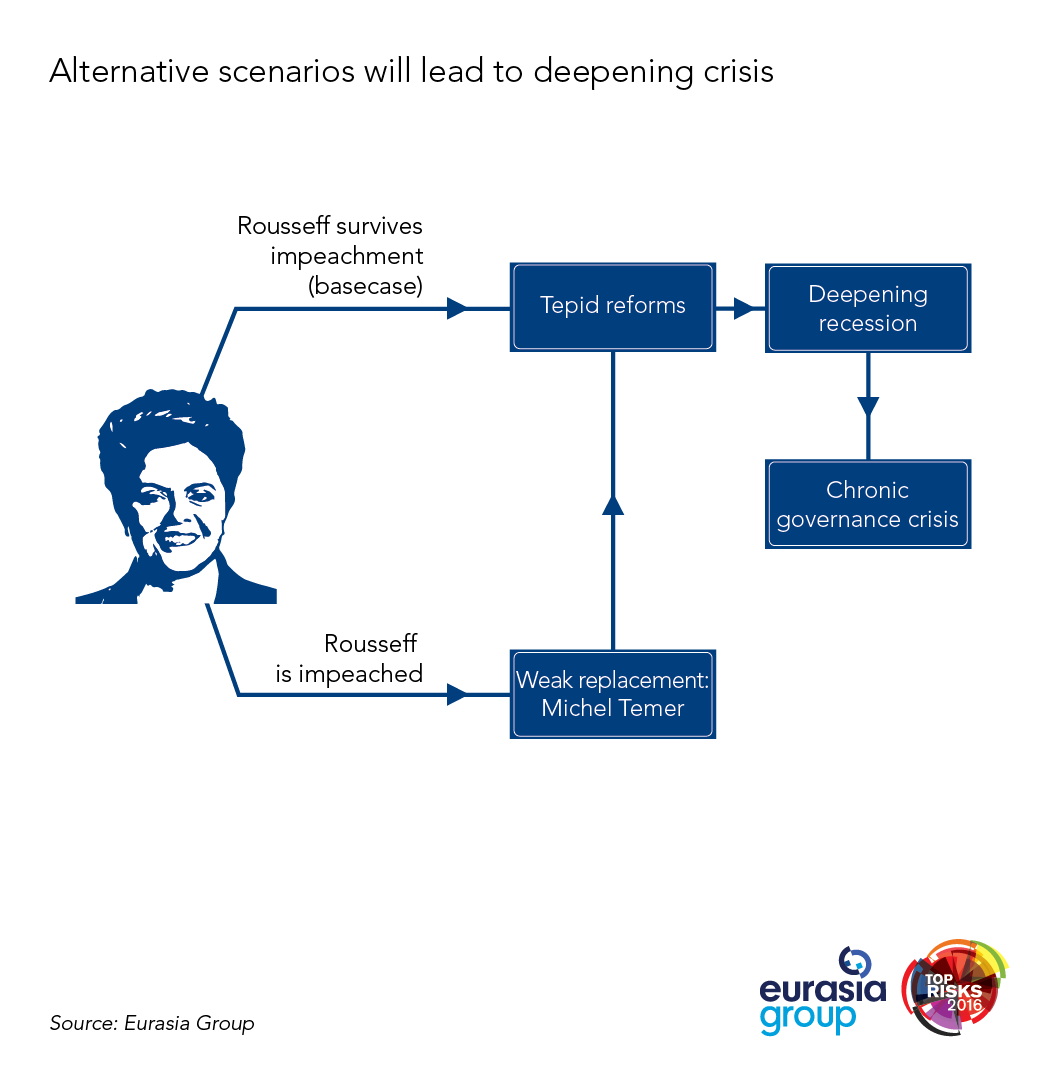