This crew has a proven tendency to pursue loose-cannon foreign policies. We know Putin loves bolt-from-the-blue moves, such as taking Crimea or swooping into Syria with a chemical weapons deal when Obama faced the unpleasant political consequences of dodging his own red line. Erdogan just shot down a Russian fighter jet. Bin Salman unexpectedly announced a new Islamic alliance against terrorism, veering away from Saudi Arabia's laser-like focus on Iran. And Poroshenko has at multiple junctures in his crisis with Russia shown a penchant for military options against a much stronger enemy.

Why the unpredictable behavior? Several reasons. Some of these leaders have a need, indeed a craving, to attract attention to themselves. Erdogan and Putin are notoriously big-headed, and young bin Salman has to establish his credentials. Some tend to put personal considerations above national interests: Erdogan wants an executive presidency, bin Salman wants a throne. No matter that both are pursuing these goals at the cost of increasing their countries' exposure to regional shocks. Finally, these leaders all benefit from a dearth of domestic institutional constraints on their freedom of maneuver.

A number of geopolitical risks will rise from these personalities this year. Expect a high density of black swans flying around—what you don't know may well hurt you. The situation will be aggravated by the fact that Poroshenko, bin Salman, and Erdogan all feel they have been abandoned by Western leaders whose attention they will only be able to regain through actions too loud to ignore. And they'll act.

The majority of these leaders play a role in the Syrian conflict, and their interests diverge. Erratic personalities increase risk as the Levant's tragic conflict enters a crucial passage this year. The blood feud between Saudi Arabia and Iran will also rear its head in one of the array of the region's proxy conflicts; bet on bin Salman's need to show “maturity” playing out in an erratic way. All of these leaders have good access to military and paramilitary proxies, giving them an easy way to go erratic while keeping their fingerprints off the result. Putin will not outdo himself by invading a new country, but he will keep pressing where he wants.

Poroshenko is more of a victim than the other principals here, but his risk-taking nature could well spur unexpected troubles. The conflict with Russia will likely freeze over during 2016, the EU will probably ease its sanctions, and Poroshenko could get much of the blame for the failure of the Minsk peace process. There's a risk he'll throw caution to the wind and start shooting, causing Putin to shoot back with a lot more ammunition.

These unpredictable leaders make our list this year because their interventions overlap and conflict. One powerful, erratic leader spells trouble; four spell volatility for the international system, and a lot more turmoil. 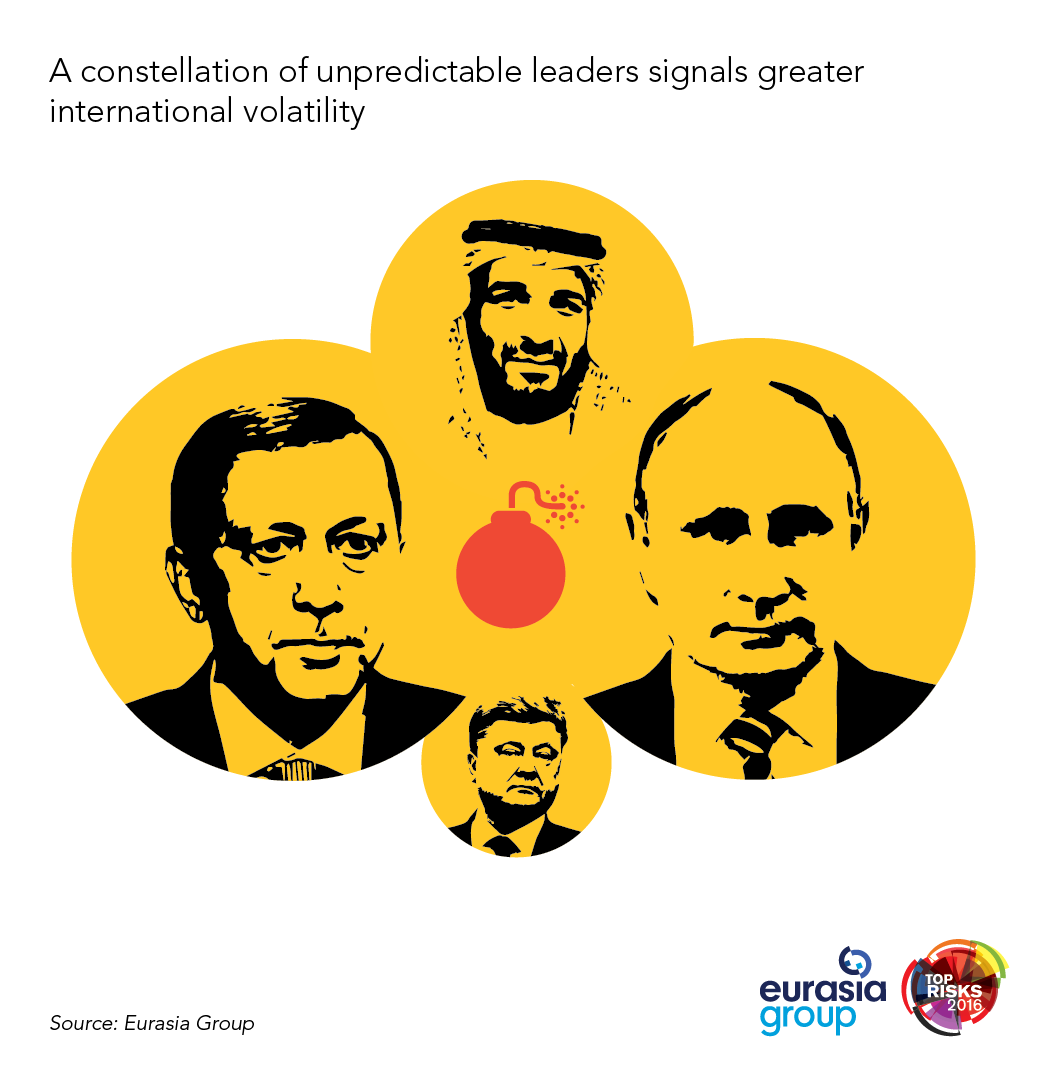