THANKS TO POPULIST PRESSURE, the spread of state capitalism, and the ongoing geopolitical recession, protectionism is making a comeback. The rise of antiestablishment movements in developed markets has forced (in some cases, enabled) policymakers to shift toward a more mercantilist approach to global economic competition and to look as if they're doing something about lost jobs. Walls are going up.

At the international level, growing Chinese assertiveness—particularly in buying up strategic foreign assets—has created concern that intellectual property transfers are taking place at a pace and scale that demands a political response. That all this is happening in the context of today's G-Zero world and the general retreat of US leadership means that no one leader has proved willing and able to ensure that new rules of the game are written to manage these fast-paced transformations.

Together, these trends create Protectionism 2.0, with its barriers in both the “old” and “new” economies. Governments aren't just trying to protect comparative advantages in traditional sectors such as agriculture, metals, chemicals, and machinery out of concern for lost jobs or domestic economic interests. They're also intervening in the digital economy and innovation-intensive industries, with the primary goal of preserving intellectual property and related technologies as critical components of national competitiveness.

Governments are intervening in the digital economy and innovation intensive industries to preserve IP and related technologies.

The new barriers are also less visible. Instead of traditional measures such as import tariffs and quotas, today's tools of choice include “behind-the-border” measures such as bailouts, subsidies, and “buy local” requirements designed to bolster domestic companies and industries. These measures don't necessarily circumvent WTO commitments; they rely on a collective inability to update and strengthen existing global trade rules.

The new form of protectionism generates more acrimony because it is often targeted at political adversaries. In short, it matters where the trade and investment comes from. The origin and regulation of FDI is increasingly politicized, as states grow anxious about foreign control of domestic champions and sensitive technologies. Suspicion is greatest between Europe/the US and China/Russia.

This trend will create new trade risks for 2018. First, new rules are being written for the global economy without any overseer or shared norms, so checks and balances against a surge in protectionism are lacking.

Second, because this new protectionism will coexist with a continuing push for regional free trade agreements, the global regulatory environment will become more complex and contradictory. Companies and investors will have to manage more complicated supply chains and navigate more restrictions to data flows and other barely discernable or invisible barriers. The cost of doing business will rise, and supply chains will be less reliable. Consumers will bear the brunt of losses.

Finally, while economic protectionism may seem like a benign means of international competition, the political resentment it will create among major powers risks spilling over into other areas of diplomacy. Protectionism 2.0 will eventually inflict greater geopolitical damage than those who practice it expect. 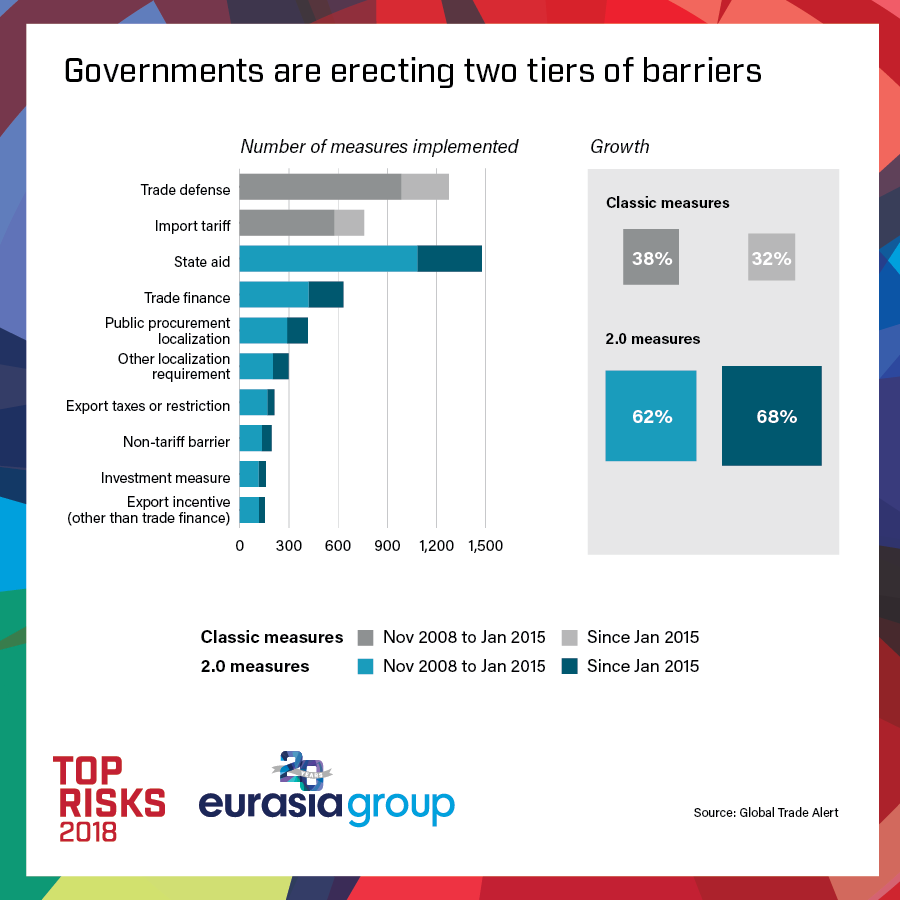