TRUMP HAS IT IN FOR IRAN; rightly or wrongly, he sees the country as the root of much evil in the world. In 2018, US-Iran relations will be a source of broad geopolitical and market risk. The nuclear deal, known as the Joint Comprehensive Plan of Action (JCPOA), will probably survive 2018, but there's a substantial chance that it won't, pushing the region into a period of real crisis.

The US plans to implement a holistic strategy to combat Iran's regional influence and its nuclear ambitions. That means strong support for Saudi Arabia and more active US efforts to contain Iran in Syria, Iraq, Lebanon, and Yemen. The US will also more frequently sanction Iran for ballistic missile tests, perceived support for terrorism, and human rights violations. And Trump's public support for ongoing protests in Iran will further spike tensions.

Iran will push back, including by harassing US naval vessels, a gambit that can lead to deadly and escalatory action. Proxy conflict could kill embedded Iranian or US troops. Saudi Arabia and its risk-acceptant crown prince could perceive US support as a green light to go after Iran, creating the danger of overreach. Tense Iran-Saudi relations will carry the risk of mutual cyberattacks and pose challenges for investors who seek to invest in both countries.

That's bad enough, but worse is what happens if the nuclear agreement collapses. At this juncture, the deal will probably survive by a hair. Trump's shock-and-awe rhetoric surrounding his 13 October decertification will probably mellow as his bottom-line policy emerges. The EU and its member states will resist Trump's main demands to “fix” the deal. Iran receives major financial benefits from the deal and will work to keep it intact.

All that said, the nuclear agreement could well fail in 2018. Iran's withdrawal from the deal is the most likely path to failure. This outcome would not happen quickly, as Iran would blame Washington and try to keep the European nations on its side. But Tehran agreed to the deal for financial reasons, to spur its economy and create jobs. A new executive order that unilaterally alters the deal, new US sanctions, and newly hostile US rhetoric would all poison Iran's investment climate, scaring off FDI. Iran's elite, as 2018 unfolds, could decide under pressure from hardliners that the deal is no longer in their interest. Tehran would have a shot at winning the blame game, especially if the US has taken steps in material breach of the agreement.

Or maybe Trump just ends it. That's less likely, but still plausible. At any point, the president can revoke the waivers and end sanctions relief, killing the deal. This president will likely become more unpredictable as the Mueller investigation unfolds. Under immense pressure at home, he could decide to spike the deal.

Trump will likely become more unpredictable as the Mueller investigation unfolds. Under immense pressure at home, he could decide to spike the deal.

If the agreement fails, we enter a new and dangerous geopolitical dynamic. Regarding sanctions relief and Iran's nuclear program, two scenarios are possible. In the most likely, vigorous US enforcement of secondary sanctions leads most European and Japanese companies to leave Iran. Oil importers in Europe, South Korea, and Japan decide against purchasing Iranian oil. But China and India would not acquiesce to a US demand to significantly reduce their imports. If Iran offers both buyers a significant discount, about 300,000 barrels per day would probably come off the market. Iran would ramp up its nuclear program. It would at least break the seals on its advanced centrifuges currently in storage and begin large-scale experimentation and production on more-advanced models. The threat of US and/or Israeli strikes would again hang over the region and boost oil prices.

In a less-likely scenario, Europe, Russia, and China agree to a “JCPOA 2.0” with Iran. Trump backs down on implementation or decides not to apply secondary sanctions. The president declares victory for the benefit of his base without further rupturing transatlantic ties. While the pace of foreign investment would slow, firms already established in Iran would stay and others would eventually join them. European and Asian importers continue purchasing Iranian oil. Iran continues to comply with the JCPOA's nuclear limits. The geopolitical effects of this scenario are more limited. Still, tense US-Iran relations would spill over into regional geopolitics. And concern over a hardline turn in Trump's sanctions policy would cloud investor sentiment toward Iran.

Risk 6: The erosion of institutions 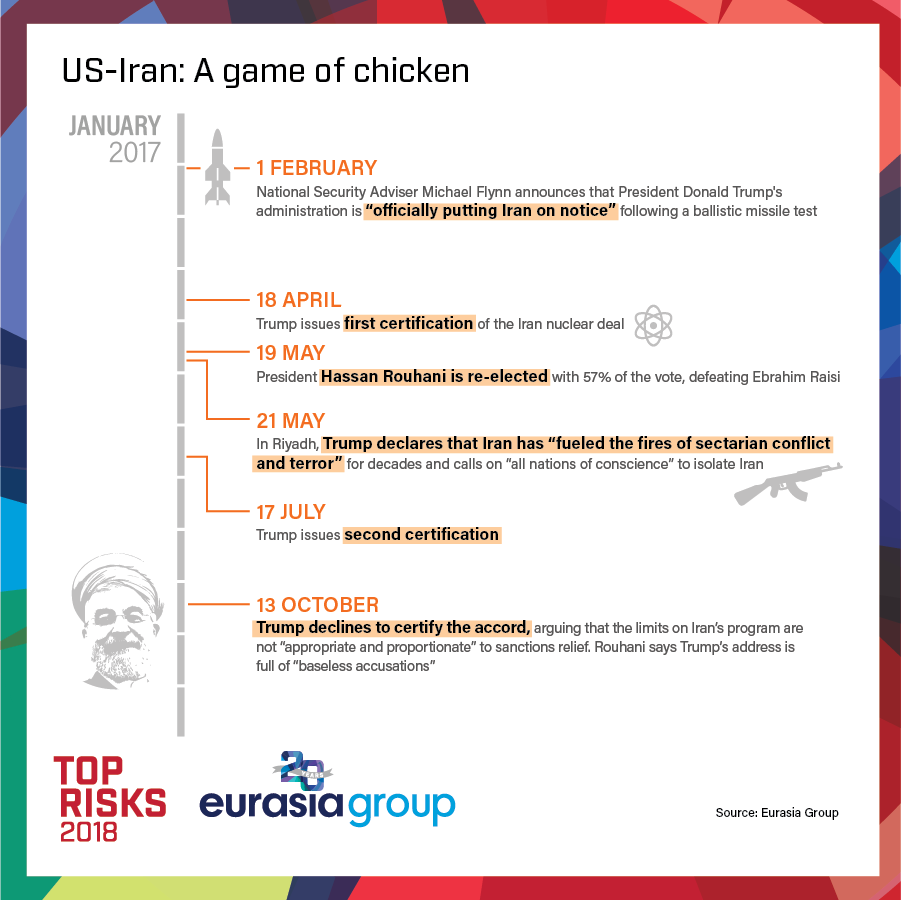