With $3.5 trillion in reserves, the world's second largest economy, and a willingness to spend internationally, never in modern history has a country at China's modest level of economic and political development produced such an expansive global footprint. And China is putting its large economy and its global economic presence to good use—advancing its interests along the “Silk Road.” Its “One Belt, One Road” strategy seeks to modernize partners' road, rail, and port infrastructure and is already putting smiles on the faces of leaders in 64 nations. The Asian Infrastructure Investment Bank will begin operations this year as the first international financial institution developed from scratch by Beijing.

Yes, Chinese growth is slowing, and there is urgent need for deeper economic reforms. But this slowdown is not hindering China nearly as quickly as Beijing's impact on the rest of the global economy is expanding. A confident President Xi Jinping has recognized China's overdue need to drop the “small, poor, misunderstood teenager” routine in order to defend its interests. Beijing is moving from free-rider and rule-taker to ever more influential rule-maker.

There is active state support for short-term commercial tactics through state-owned enterprises and privately owned national champions. There will also be longer-term strategic economic plays—like pressing for Chinese standards to compete with “universalist,” US-supported ones. Together, these and other instruments in the Chinese toolkit are creating new sources of geopolitical tension: an unprecedented partnership with Russia, friendships in Europe that raise new and uncomfortable questions in transatlantic relations, and ties with Asian countries whose leaders who face an increasingly difficult balancing process between Washington and Beijing.

China's global footprint is primarily based on the country's economic prowess. But improving cyber/information technology and military capabilities also play a growing role. The former are nearing parity with those of the United States (though with a different intent than Washington's). The latter are still mostly focused in Asia—on Taiwan and the South China Sea—but are unmistakably expanding.
Here is the risk: Many countries all over the world now recognize that China is both the most important and uncertain player for a wide variety of critical outcomes. This is unnerving those that are more exposed to China than ever before... but aren't ready for this change, don't understand or agree with Chinese priorities, and won't know how to react to this new state of affairs. Combine this with the reality that a dramatically transforming Chinese domestic environment (four times more corruption investigations in 2015 than in 2011 and financial reforms that will create blowback) and the situation will have an outsized impact on the international marketplace. When China now flexes even the little finger of its economy, global markets will react. In 2016, perceptions of China will be the most important macro driver of change in the global marketplace.

China’s Xi looks to take advantage of US in crisis: Eurasia Group’s Sumpter 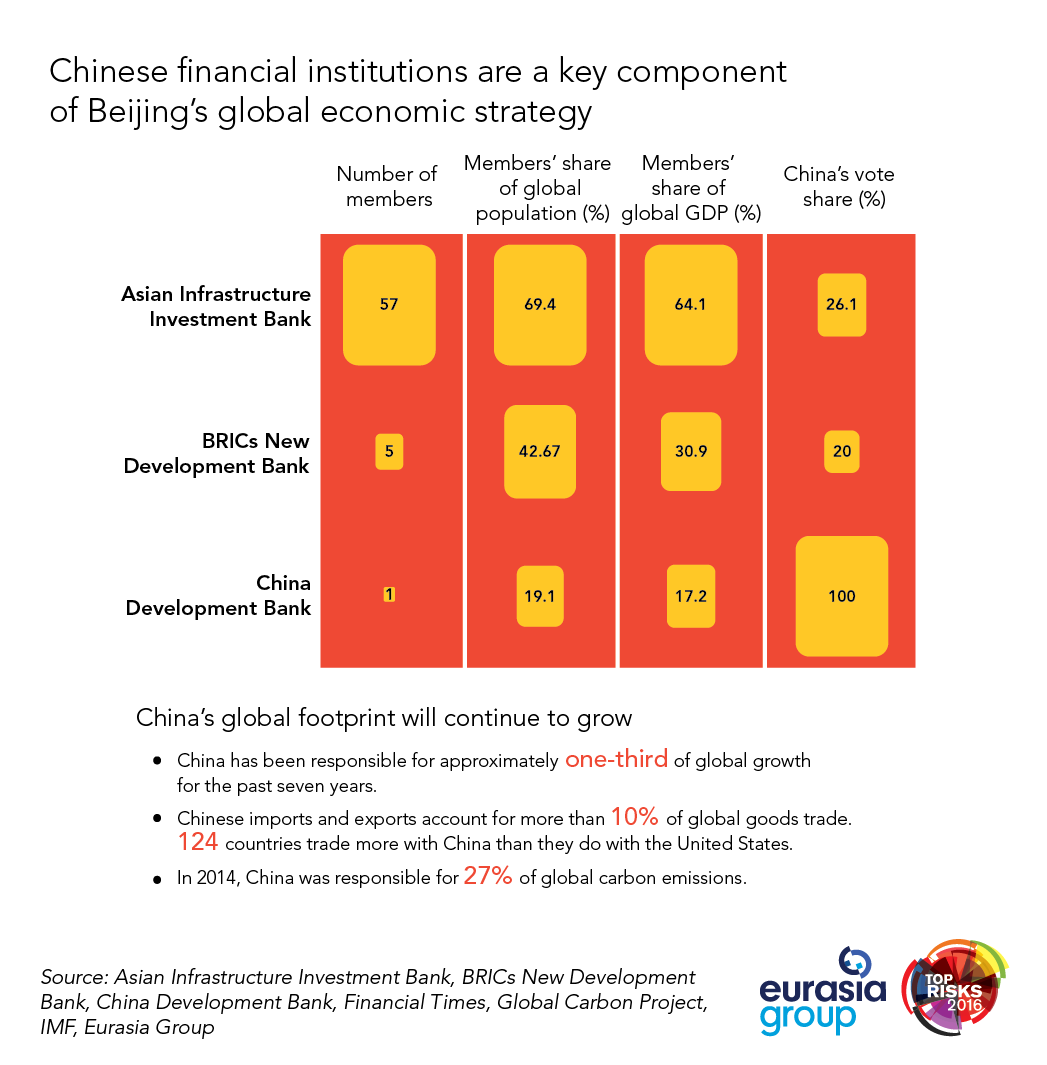