East versus West, old versus new, and core versus periphery. Europe's divisions are nothing new. They've defined Europe's challenges for decades. But in 2016, they will reach a crucial point as an identity crisis emerges be- tween open Europe and closed Europe—and a combination of inequality, refugees, terrorism, and grassroots political pressures pose a fundamental challenge to the principles on which the European Union was founded.

It's not the currency union that's under threat. Greece isn't out of the woods, but it's neither pressing nor threatens contagion. Instead, it's the rise of populism and nationalism, the erosion of rule of law, and the risks to the integrity of the Schengen agreement on open borders.

The risk starts from the top. The biggest advocate of open Europe has been Germany's Merkel. The consistent leader of Europe since the 2008 financial crisis, and the European Union's savior through her stalwart handling of the Greek crisis, she was named Time magazine's person of the year just three weeks ago. But this image was already losing its shine by the fourth quarter of 2015. This year, Merkel's extraordinary welcome to refugees will draw fewer followers inside her own country, and virtually none outside it. This will undermine her political position, and could encourage a domestic challenger over the coming months. It creates a dramatic change in how Europe interacts with itself and with the rest of the world.

That leaves Europe with less ability to respond collectively to any crisis (expected or otherwise). More resentment toward Germany from others in Europe will undermine its political cap- ital. The refugee issue will play out across Europe as the proximate cause. With a growing fear of ISIS and international terrorism more broadly, the Schengen agreement risks being broken in 2016, and as more governments take legal action (as with Slovakia's fight in the European Court of Justice), a divergence of national perspectives will dominate European policy. Closed Europe is first and foremost a Europe that closes itself up to the outside world, and whose countries close themselves up to one another.

There will be a next-stage surge of populism. Trends already apparent in Denmark, Greece, Hungary, Poland, Spain, and Sweden will spread across the continent. In France, it's the National Front with unprecedented levels of support in recent regional elections. Even in Germany, the far-right Alternative for Germany party will continue to gain in the polls, despite being leaderless. In both countries, the populists' growing clout will force establishment parties to amend their political platforms or suffer the consequences.

Brexit is also a significant risk. British Prime Minister David Cameron is not going to secure major reform from the EU, hurting his ability to make a strong and positive case for keeping the United Kingdom in Europe. Combined with a complicated British industrial and hedge fund relationship with the continent that will see the “Out” campaign better resourced and more effectively led than the “In” campaign, plus a divided conservative party, this will mean an increased likelihood of vote in favor of exit in the upcoming referendum, now expected in June (we see the odds of Brexit at roughly one in three). Concern about the real possibility of exit will lead the headlines for months and roil the markets.

And fat tail risks are growing. In 2015, Europe already experienced its own “9/11” terrorist attacks in France and Turkey. That's not a coincidence. More dangerous attacks on Europe are likely, further exacerbating political divisions.

“Europe whole and free” is the greatest democratic experiment ever undertaken. It's about building open societies and enshrining common values into law to avoid war. The economics of Europe will hold together in 2016. Its broader meaning and its social fabric will not. 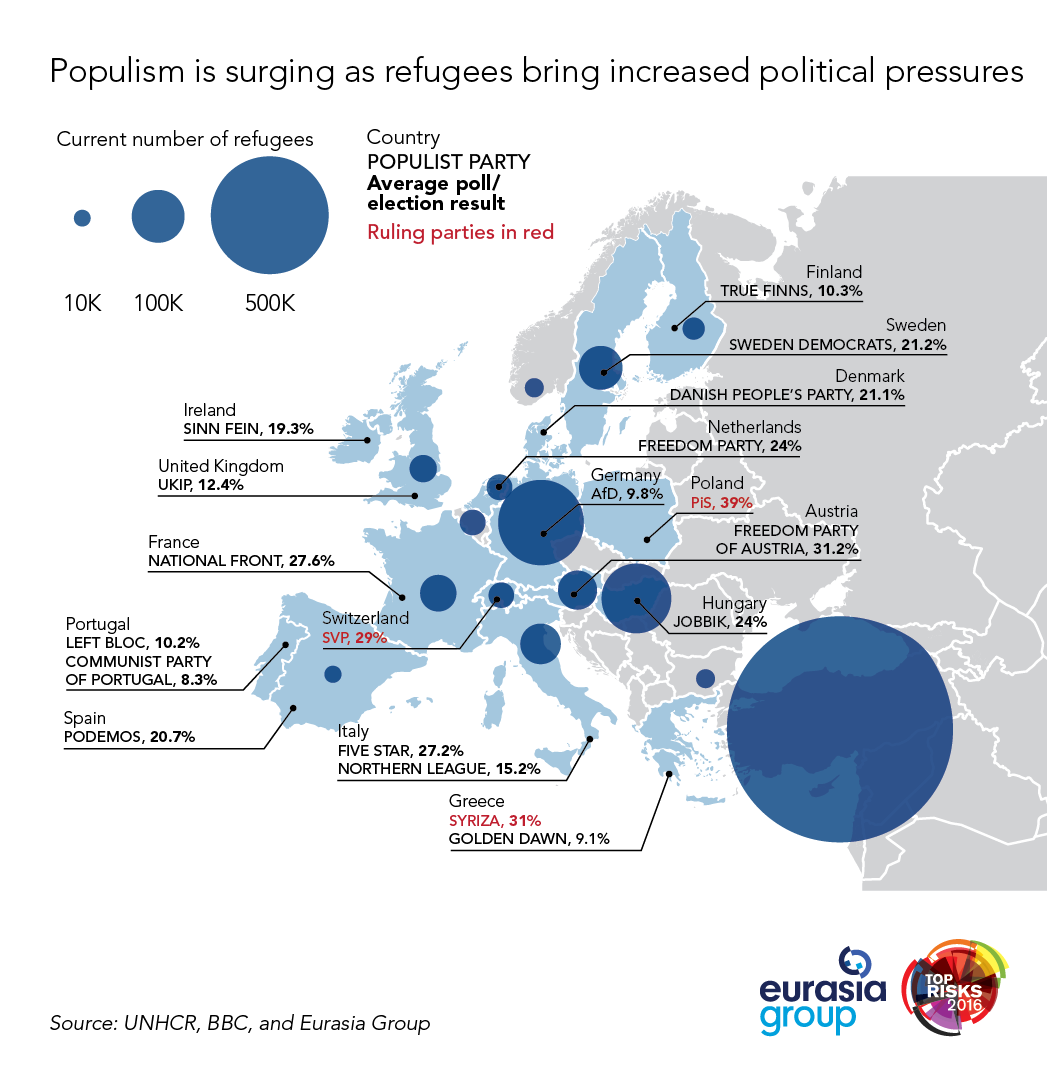